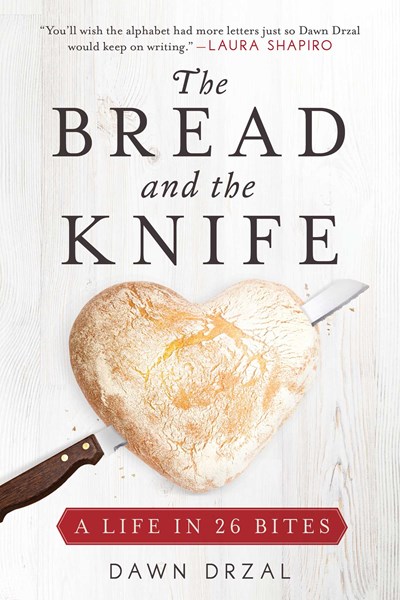 Book review: The Bread and the Knife, by Dawn Drzal (Amazon / Book Depository)

Former cookbook editor Dawn Drzal’s memoir is structured around 26 dishes or ingredients of significance in her life, matched up to the letters of the alphabet.

Although the alphabet theme is a bit gimmicky, the writing is anything but. Drzal draws powerful metaphors from the role food has played in her life stories, including from her work, her loves, connected to her personality and travel experiences. Like any great food writing shows, it’s never just about the food.

Life may disappoint, but gelato? Never.

These stories, spread out across her world travels as well as dinner parties at home and explorations in her own kitchen, are bittersweet. Alongside recollections of sheer joy, Drzal recounts moments from life with two ex-husbands, family stories with complicated and sometimes evocatively lovely emotional connections, or ones recalled with regret, and a tendency towards examining the melancholy or lessons learned the hard way. But her thoughtful reflections ensure it’s no downer, but rather feels universal. She tells these culinary-centric vignettes with a very necessary distance, and it’s clear she’s grown and learned something; these are dry-eyed and wise, not maudlin.

The memory of their texture and color lingers, and I can almost smell them still, but as the years pass that indefinable sweetness is like a beloved person’s voice that I can no longer hear in my mind’s ear.

In “K is for Kielbasa,” she takes a trip to Poland because she’s enamored with white borscht, “the best soup in the world.” It also sparks happy memories of the one meal her father cooked well – kielbasa with scrambled eggs. The trip doesn’t go as planned, as she learns she was looking for an Easter dish: “I never did find white borscht…The closest I came was a supermarket packet of powdered zurek (a close relative), which turned into lumpy papier-mâché paste when I tried to make it with hot water from the hotel room tap. I did take away two lessons, though: never travel without doing your research, and never, ever visit Auschwitz alone in February.”

Drzal includes some recipes sporadically, and the one she finally managed to track down for Polish white borscht sounds like a winner.

She displays a lighthearted and open-minded attitude towards cooking that I always find freeing: “An activity where perfection is the minimum is not my idea of fun. I get enough of that from my own superego without looking for it in the kitchen. When it comes to cooking, a dish can diverge from the recipe without necessarily being worse. It might even be better!” Or sometimes it really is worse, like when she cooks pheasant and sauerkraut for elderly food writing legend M.F.K. Fisher, who almost chokes on it.

The travel stories cover good and bad trips alike, and she imbues the bad ones with so much humor that I almost felt guilty for liking them so much, but they were so funny and unfortunately, relatable. A favorite described an inedible rosemary chicken, the only thing they could find to eat one evening in Rome when everything was closed. Some are sadder: “P is for Passionfruit,” the book’s most revealing and detailed story, gives an intimate glimpse at her first marriage circling the drain while on vacation.

Isak Dinesen once said that you can never know the truth about someone else’s marriage. I would go further and say you can’t even know the truth about your own, at least not until it’s over. I have been married twice, and each time, the dawn of understanding augured the beginning of the end.

Her travels also take her to Lake Baikal in Siberia, which must be one of my favorite places to read about. There she tries omul, a Siberian favorite: whitefish found only in Baikal and sold smoked (or prepared in other more curious, less appetizing ways) from stalls at Siberian train stations.

The wanderlust effect is powerful, maybe even stronger than idealized travel stories since Drzal’s inevitably spark realistic memories from similar scenarios every traveler is bound to have encountered.

“One thing I learned from the disastrous year that followed is that there is not as much correlation as there should be between the depth of your feeling for someone and how much he can make you suffer.”

“It’s humbling to realize that, despite all our strivings, we have no idea what will survive us. My stepfather was not the sort of man to give much thought to what his legacy would be, but I imagine he would be surprised to discover it was a stuffing recipe. Lest this sound mocking, consider Brillat-Savarin’s famous dictum, “The discovery of a new dish does more for human happiness than the discovery of a new star.” How many of us can say we achieved that?”

“It was the happiness of the right-before, when everything is potential and no branch on the tree of possibility has yet been closed off by action.”

Charming and thoughtful stories from the highs and lows of a life, told through food’s inseparable connection to our memories. 4/5

The Bread and the Knife: A Life in 26 Bites
by Dawn Drzal
published September 11, 2018 by Arcade

7 thoughts on “Culinary and Travel Stories, from Al Dente to Zucchini Blossoms”