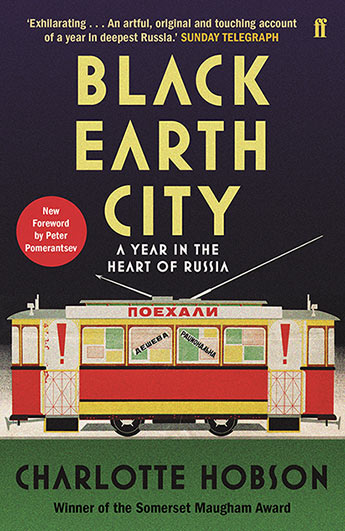 ‘You must understand,’ said Rita Yurievna, ‘that in Russian, verbs are not only about action. They are also about the experience. Think how different it feels if you walk down a street every morning of your life, and if you walk down it for the first and only time. It maybe be the same action, but it is another experience entirely.

Originally published in 2001 and reissued in 2017, Black Earth City details Brit Charlotte Hobson’s study year abroad spent in Voronezh, a small city on the border of European Russia and the seam where the country bursts open into the Urals and Siberia.

The reissue has a forward written by Peter Pomerantsev, author of one of my favorite books about modern Russia, Nothing is True and Everything is Possible. He writes about the significance of Hobson’s book in our current atmosphere, where Russia is “seen either as the greatest evil in the world, or, for a new generation of far-right worshippers, the great hope.” And he notes that when considering what Russians are like between the extremes of perceived Putin-worship and “passive victims broken into submission”, there’s not a lot of in between. He calls Black Earth City “a sublime lesson in putting away one’s preconceptions.” Which sums up pretty well how things went for Hobson, not only regarding the then Soviet Union but a lot about her young life, and herself.

This book is fascinating in its straddling of borders – the border between the Soviet Union and suddenly, Russia; the one between the European west of the vast country and its wilder, chillier Siberian side; and the emotional border between the freedoms and possibility of youth and the reality of rapidly encroaching adulthood. Hobson looks back from her adult perspective and depicts some of the pivotal moments, without maudlin commentary, that delineated this divide for her.

Hobson and a friend choose provincial Voronezh over Moscow, the other option in their study abroad program, somewhat hilariously – an overbearingly enthusiastic student already planning parties among girlfriends living in the Moscow hostel helped them solidify their decision to go off the beaten path.

Hobson spins such engrossing, atmospheric stories that it takes awhile before you realize she’s keeping her cards close to her chest: In retelling anecdotes from that year in vivid detail, she pours her remembrance into the drama and narrative of those events and trains less focus on her inner feelings and the emotions she experienced at the time. It’s not removed or uninteresting; on the contrary, I loved these stories and thought they provided illuminating glimpses into the last pre- and most immediate post-Soviet moments in this lesser known city and region. But Hobson herself remains something of an enigma in her own memoir.

When she does engage in some personal reflection, it’s moving and relatable in the way that young, doomed-from-the-start love stories are, or in the excitement of the kind of journeys we have the energy and ambition to embark on while young. Those moments were brilliant.

But mostly she acts as a camera, panning through the dollhouse-like environment of the hostel where she lived and showing what was going on behind each of its doors – the parties, the wild, vividly depicted characters, the fights, the shared meals and vodka, the love affairs and dramas.

I would’ve liked a bit more insight into what things felt like for her personally, but it’s almost forgivable when her superpower is clearly observation and description. Behold:

One sunny afternoon, a man built in the Socialist Realist mold knocked at our door. His gaunt, wedge-shaped head and chips of blue glass for eyes gave him an air of steely dedication, while the six-foot-four frame filling our doorway suggested a character who would stop at nothing. He produced a bottle of vodka and said in a voice from the grave, “Let’s get acquainted.”

There are many incredible scenes and examples of cultural experiences here, but one that especially lingered described her last moments in the then Soviet Union, as she focused intently on a bag forgotten on a train, not knowing that the country, as it was, was in its dying minutes. It exemplified the blend of personal bubble and narrative of the greater, rapidly changing world that Hobson excels with throughout. 4.25/5

Black Earth City: A Year in the Heart of Russia
by Charlotte Hobson
published 2001