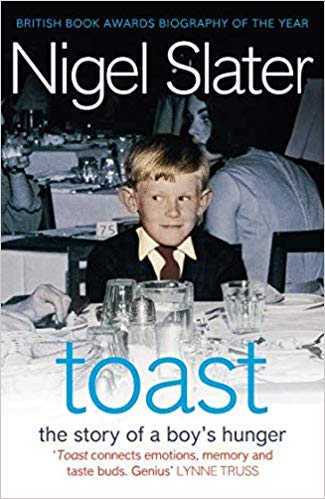 “If you really want to, dear,’ was my mother’s answer for anything I wanted to do that she would rather I didn’t. This was her stock answer to my question: Can I make a fruit sundae? By make I meant assemble. My fruit sundae was a gloriously over-the-top mess of strawberry ice cream, tinned fruit cocktail, maraschino cherries and any nuts I could lay my hands on. I always saved a cherry for the centre. Believe me when I tell you it was the envy of all who set eyes upon it.

British food writer Nigel Slater’s Toast is a coming-of-age memoir in vignettes of food-centric memories from his childhood and adolescence. The moments and scenes it recalls are funny, awkward, frightening, sometimes disgusting, and elsewhere, quietly heartbreaking. In these anecdotes he portrays the childhood of a somewhat selfish loner who’s undernourished, physically and emotionally, and peppered with surprisingly serious, disturbing incidents, given the levity elsewhere.

Nigel’s mother wasn’t exactly a good cook, so this is an unusual foodoir, centered not around the fondly recalled, lovingly prepared meals of family life but rather the meals his mother labored to produce on special occasions and the ready-made items that substituted the rest of the time. But she also wasn’t quite as bad a cook as Slater seems to think (just not quite the chef he’d become himself — I love reading his recipes in The Guardian and they’re of quite a different caliber than what her straightforward, working-class 1960s/70s British repertoire consisted of.)

He states his belief that it’s impossible not to love someone who makes toast for you, even when it’s burnt and scraped like his mother’s inevitably was, establishing the tone– a little snarky but sentimental, close to his mother and haunted by recollections of her struggling to breathe, heavily foreshadowing what was coming.

But beginning with his cheerful toast philosophy, it’s a tour through brilliantly rendered scenes and the nostalgia of the meals, snacks, and junk food that make them memorable. Slater tells stories from his young life up until arriving in London, taking a job at the Savoy Hotel grill with culinary school on the horizon, marking the gritty but promising moment when he stepped into his future in food.

I read this with book in one hand and phone in the other, because Slater unleashes a parade of British candies, chocolates, ready-made items, and popular dishes of the period and his family’s working-class background that were totally foreign. Being deeply interested in international junk foods, I excitedly googled it all. This was a highlight of the book for me. I love when an author can write about lower-brow foods and products and still capture the significance of it all, especially knowing of Slater’s future career, writing about food for The Observer and Marie Claire, and this was the genesis of his relationship to food and cooking.

Even knowing nothing about most of the items (I was thrilled to see Heinz Salad Cream at an international grocery store shortly after reading this, although it sounds too icky to try) I still fully understood his connection to them. It was delightful to see a childhood through this lens, and his excitement was always palpable, although an underlying sadness is present, too. It felt true and lifelike to me — the uproariously funny does go hand in hand with darker, tougher, upsetting occurrences.

The latter portion of the book revolves around the sadness and coping that marked the rest of his childhood. His mother died when he was nine, and a few years later his father remarried, to their cleaner, dubbed Mrs. Potter. Nigel was no fan of hers. He insinuates that Mrs. Potter was most interested in his father’s money, and cooked rich, decadent meals despite Mr. Slater’s worsening health conditions. The competition for his father’s attention is also a factor, leading to pettiness like her refusal to share her lemon meringue pie recipe and Nigel resorting to counting eggshells in the trash, trying to suss it out.

The book’s early tone tricked me a bit into thinking this would be a nostalgic, food-filled romp through childhood–how can you not think so when a hilarious scene describes the family trying spaghetti bolognese, accented with cardboard drum of Parmesan, for the first time: “Daddy, this cheese smells like sick,’ I tell him. ‘I know it does, son, don’t eat it. I think it must be off.’ We never had spaghetti bolognese or Parmesan cheese again.’”

Not what I expected– darker and more dysfunctional– but a heartfelt, immensely readable, and vividly depicted slice of life from a particular place and era, and the moments that shaped a popular food writer. 4/5

Toast: The Story of a Boy’s Hunger
by Nigel Slater
published 2003