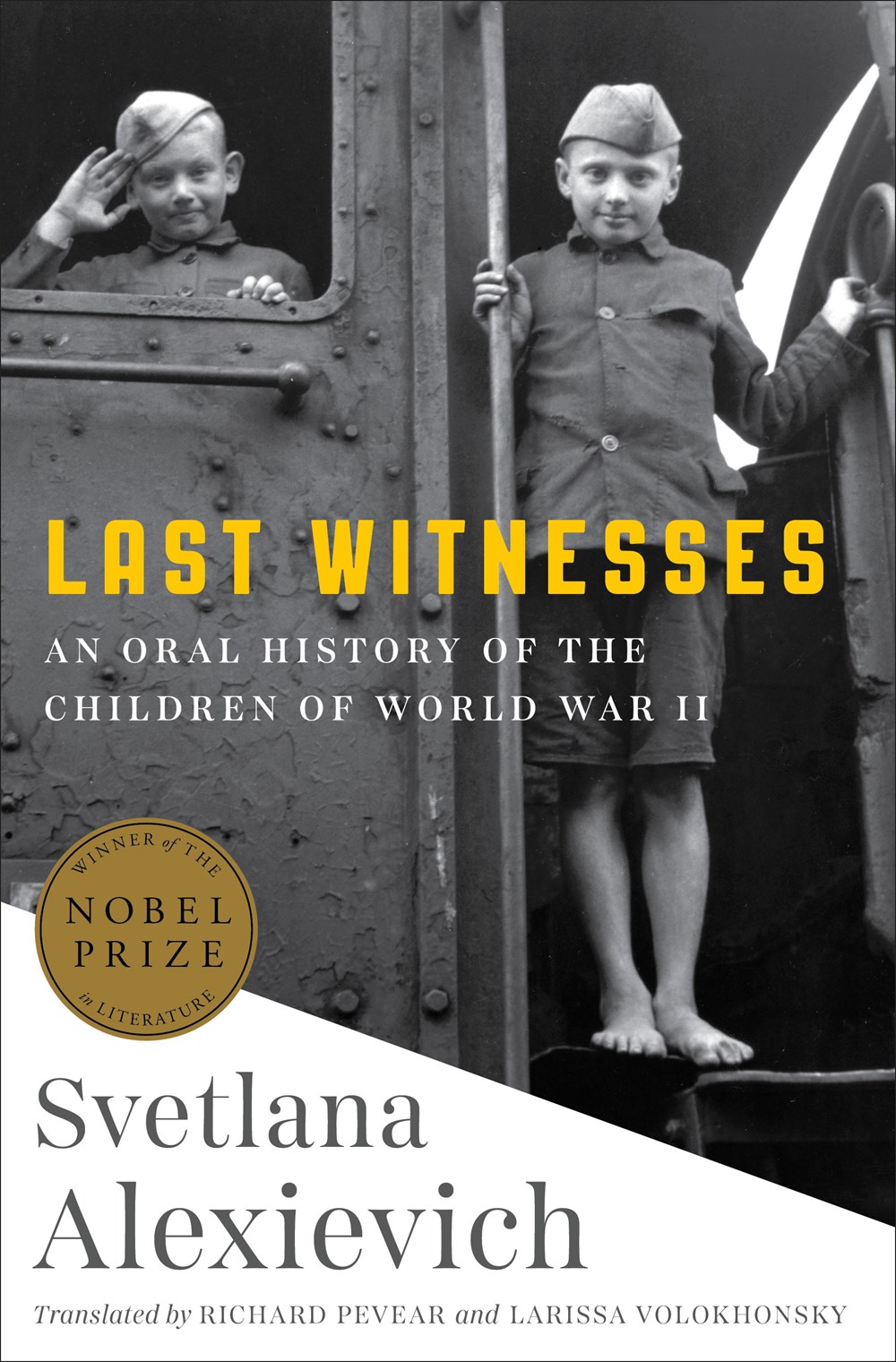 These pictures, these lights. My riches. The treasure of what I lived through…

Last Witnesses is the latest work from incomparable Belarusian journalist and Nobel Prize winner Svetlana Alexievich to be translated from Russian to English. In the vein of her other books, this oral history collects stories told from one of Russia’s immense twentieth century tragedies. Although her other works also feature some voices recalling incidents and scenes from childhood, this one is unique in that all of these recollections are from people who survived the Second World War in the Soviet Union as children — sometimes close to combat and sometimes at home, or what remained of it.

These memories are painful, achingly so, but often hopeful. They’re centered around the remembered joy of some act of kindness or mercy, or else around something almost too terrible to comprehend, underscored by the realization that it was experienced by a child.

Each vignette begins with the speaker’s name, their age at the time of their story, and their profession in adulthood. There’s something jarring about this, as it provides the only context we get of their future juxtaposed with a haunting, personal moment from their past. We know they survived, they’ve made a life despite the sometimes emotionally derailing events they experienced, but there’s something purposely clinical about it. Even when they’re reflecting on how their suffering during wartime affected their adult lives and shaped their personalities, there’s distance.

These are best read in small doses, because they are intense. Many are upliftingly hopeful, replete with warmth and kindness, but so many of them are devastating and senseless. That doesn’t mean we shouldn’t read them; on the contrary, as more than one of the subjects says themselves, they need to tell these stories and be heard. The simplicity of the telling belies the complexity of the message, and often there’s a lot left unsaid. Like the many that include mentions of rescue by returning Red Army soldiers: “They took us in the direction of the sunrise. Home…” but we know that wasn’t a simple happily-ever-after.

A recurrent story told is of those sent to Germany where their blood was taken forcefully, because “German doctors thought that the blood of children under five years old contributed to the speedy recovery of the wounded. That it had a rejuvenating effect.” I never knew this, although since they believed all kinds of weird pseudoscience in Germany then I’m not surprised, just horrified.

The stories are highly impressionistic, thanks to the sensory elements that survived the decades until Alexievich interviewed them (this was originally published in 1985.) Colors often stood out, even when the storyteller acknowledges memory might be failing them in terms of accuracy.

I remember everything in black: black tanks, black motorcycles, German soldiers in black uniforms. I’m not sure that it was really only black, but that’s how I remember it…I’m wrapped in something and we hide in the swamp. All day and all night. The night is cold. Strange birds cry in frightening voices. It seems that the moon shines very, very bright.

Before the war my older sister worked in the regional party committee, and she stayed behind for the underground work. She brought home many books from the committee library, portraits, red banners. We buried them in the garden under the apple trees. Also her party card. We did it during the night, and I had the feeling that the red…the red color…would be seen from under the ground.

It’s this kind of detail that makes these so tangibly felt. Reaching back to childhood, even non-traumatic memories often have a wash of color over scenes. It was one of many elements that made these so affectingly perceptible.

More so than some of Alexievich’s others, the stories told here feel like smaller parts of a whole, without as much context. The recollections are succinct, none more than a few pages long, and background about families and prewar lives quite brief. It’s purposeful, this revealing of only the most powerful memory, but it did sometimes leave me wondering more about specific anecdotes, or the endings of stories. They often lack a defined beginning, middle, and end. They’re structured so well that it mostly works, but occasionally one would leave questions about how it was ever resolved.

Like a young girl who remembers being pushed from a train bound for Germany, given the opportunity to save herself by her fellow deportees. “I landed in some ditch and fell asleep there. It was cold, and I dreamed that mama was wrapping me in something warm and saying gentle words. I’ve had that dream all my life.” Her recollection ends shortly after, but without explaining how she got out of that ditch. These are their stories and their choices of what to tell and what not, but sometimes it was almost unbearable to be left wondering what was going unsaid.

Heartbreaking but revelatory, as always Alexievich knows how to compile a unique,  deeply felt chronicle of tragedy and war, and the shadows they cast long after they’re past. The translation is mostly smooth, but contains a few oddities. Pevear and Volokhonsky always favor some strange word choice that I think could be better expressed, but for the most part it’s meaningfully done. And regardless, the impact of these stories is strong, and the value of such perspectives from children forced to grow up in unimaginable ways witnessing unimaginable things is incomparable. 4/5

14 thoughts on “Voices of the Second World War’s Children, Curated by Svetlana Alexievich”