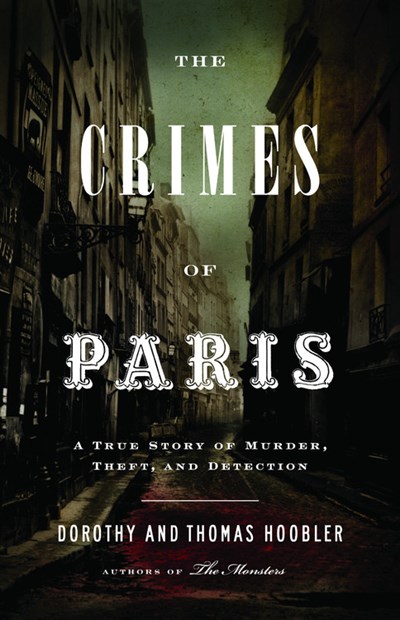 The disappearance of the Mona Lisa from the Louvre stunned Parisians, who had long dismissed any impossible task with the remark that doing so ‘would be like trying to steal the Mona Lisa.’

The central defining event in The Crimes of Paris, by husband-and-wife historians Dorothy and Thomas Hoobler, is the 1911 theft of the Mona Lisa from the Louvre. That tricky, mysterious case flits in and out of this narrative, serving more as a cornerstone to define where the other stories are in time, culture, society, and technological advancement. Meanwhile, the authors tell a number of crimes and criminal stories of every stripe in early 20th century Paris, with an emphasis on infamous or historically significant cases. It returns to the Mona Lisa theft, but that story takes a backseat to a more broadly focused history.

Which was fine by me! But good to know going in, as it shifts gears somewhat abruptly after a detailed, compelling introduction to the day Mona Lisa disappeared. The rest of the crimes are so juicy, historically rich, sometimes shocking and other times breathlessly fun to read about that the Mona Lisa narrative almost pales in comparison.

Especially interesting is that it covers something of the painting’s mythos. I know it’s a case of who am I to say, but I’ve never felt the enchantment around it. The authors help explain “the strange atmosphere that emanates from the figure in the painting” and that’s contributed to her mystery and enduring fascination:

She is older than the rocks among which she sits; like the vampire, she has been dead many times, and learned the secrets of the grave; and has been a diver in deep seas, and keeps their fallen day about her…

That’s from English art critic Walter Pater, in an essay that “made the Mona Lisa seem more than merely a painting — it was a nearly living thing, eternal and bewitching, and now it was gone.”

This is one of those books so jam-packed with side stories peripheral to the bigger ones that make for fascinating trivia. Like an early case of using fingerprint identification in Argentina in 1892 that demonstrated the need for a more reliable form of evidence, as police tried to get a murder suspect to confess by spending “a night outside her house rattling windows and making ghostlike sounds, supposed to mimic an avenging angel.” It drives home how innovative this turn-of-the-century, Belle Époque time was.

And the amount of detail is delightful: like that when news of the Mona Lisa‘s recovery broke, it interrupted a fistfight in Italian Parliament.

There’s a lot woven into the crime stories about the city’s culture, namely its significance for the arts in the pre-World War I decades. Because there are so many famous figures involved, it reads like a who’s who of the era, with fascinating intersections of these personages with high-profile crimes. One chapter takes a rather long detour into Pablo Picasso’s life and role in the art world at the time, but feels mostly relevant since he was a suspect in the Mona Lisa‘s theft and had links to stolen art.

It also examines historic crime fiction and theater trends and how they reflected the zeitgeist. Parisians of this time had some macabre interests. Like the Grand-Guignol, the horror-show theater attempting “to shock people out of their conventional thinking,” which measured success in how many audience members fainted or vomited. The role of crime fiction in the city’s consciousness also ended up more interesting than I expected.

A significant topic is how law enforcement advanced. Primary players were Alphonse Bertillon, who developed a system of biometrics for cataloguing criminals’ physical attributes, and Edmond Locard, who gave criminology “Locard’s Exchange Principle, which remains the basis of modern forensic science. It states that a criminal will always take something away from the scene of the crime and will in turn leave something behind.”

Bertillon surprised me, as his contributions went beyond his anthropological system, which, after falling from favor over time thanks to fingerprints and DNA, is making something of an updated comeback in the form of new facial recognition technology. But Bertillon was also a seasoned crime scene investigator and photographer, developing techniques for thoroughly photographing undisturbed crime scenes, which hadn’t been done previously, and the importance of which is clear. He was also instrumental in successfully collecting tiny bits of evidence from scenes for outside analysis.

One of my favorite stories here is Vidocq’s. A criminal turned policeman, he went undercover in prisons to be able to later identify criminals, eventually inspiring Bertillon and influencing Edgar Allan Poe and Arthur Conan Doyle‘s work, capping his unconventional career by opening “the world’s first private detective agency”.

We learn the genesis of “Cherchez la femme” — seek the woman, apt considering how many of the murders covered were committed by women. Like the infamous Marie Lafarge, who poisoned her husband and cughta the media’s attention. The French media had an insatiable appetite for salacious cases, and merchants had the same for capitalizing on them, selling mini-replicas of trunks that transported a body in one gruesome case.

And the authors always have an eye for why these cases were monumental in crimonology:

The Lafarge case was a milestone in criminological history, establishing the standard for expert scientific testimony. Chemists would subsequently develop tests for other kinds of poisons, and trial attorneys for both sides would continue to call dueling experts, as they do to this day.

The framing device doesn’t always work — the connection between the Mona Lisa theft and the criminals populating most of these stories isn’t there, so it can feel disjointed. But it’s so much fun to read, greatly informative and packed with interesting tidbits (the mystery of a monkey jewel thief) and historical firsts (the first getaway by car chase) that I didn’t mind the lack of cohesion. Fun, fascinating, and more culturally rich than most crime yarns. 4.5/5

The Crimes of Paris: A True Story of Murder, Theft, and Detection
by Dorothy & Thomas Hoobler
published 2009 by Little, Brown