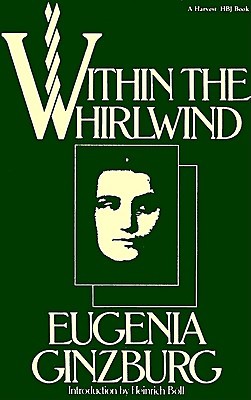 The most fearful thing is that evil becomes ordinary, part of a normal daily routine extending over decades.

It’s hard to believe, considering the popularity over time and general excellence of Eugenia Ginzburg’s first memoir, Journey into the Whirlwind, that her second one is less widely read and somewhat difficult to come by.

It’s also surprising because I can’t imagine reading that first book and not wanting to know how her life story continued. This second volume, which picks up where the previous one left off as the onetime literature professor and wife of the mayor of Kazan arrives in the gold-mining region of Kolyma, to the Siberian Gulag system, feels like a seamless transition from the first book. And it’s really an incredible life story, both because it’s not exactly uncommon — around 18 million people were sentenced to the Gulags — but it’s extraordinary, as she survived to reach the end of her 18-year sentence and live decades in a kind of freedom.

It’s also extraordinary because of the level of detail. She explains how she was able to recollect so much about her experience, both the events in prison in Kazan covered in the first book and here, in Siberia. She explains that it’s how she survived the time — thinking about how she would tell this story, and holding onto the details in her head. When she put it all on paper after her release, she says simply, “I wrote because I had to.”

The most incredible moment, to me, was when after a decade, her release day finally arrived. There’s no last-minute sentence extension or misplacing of paperwork. It goes smoothly, to her surprise. More hardships are to come, that’s certain, but she’s free. She describes each moment of the release process and the reader, having come this far on the journey with her, is similarly elated. Especially having witnessed, in her measured, frank way, how hard it was, and what kind of impossible choices she faced in a place where hope was hard to come by. “If I should so want, I could dispose of my own life, just like that. And, if I should so want, I could wait a bit and see what the future would bring.”

But release from the Gulag system after doing the time didn’t mean she could hop on a train and return to her home city of Kazan, where she’d been an active, enthusiastic Communist before her arrest for alleged counterrevolutionary activity. She couldn’t even hope to reinvent and blend into one of the bigger cities like Moscow or St. Petersburg (then Leningrad). Ex-prisoners had to stay within a specified zone nearby, a sort of secondary exile from the more desirable parts of society.

For Ginzburg, it was even more complicated because she fell in love with the camp doctor, Anton Walter, an ethnic German from the Crimea region, who she’d worked with as a nurse during her sentence. He remained a prisoner, and his sentence had years left when hers ended. She moved nearby and waited for him, and they were rewarded with a few years living together in freedom. It’s such a hard story, with precious few bright moments, but they were so bright for her when they occurred and she expresses what that meant to her beautifully.

And she had spent 18 years — from age 32 to 50 — in the Gulag system. There was no shaking that off. Yet she knew how lucky she was. Surviving wasn’t exactly a common fate. And what was especially interesting, and different from the first volume of her memoirs, is that she is both candid and somewhat pessimistic here. At the conclusion of Journey into the Whirlwind, published in 1967, ten years before this book, she was still singing the praises of Communism, hopeful that it would be redeemed. No such illusion remained when she wrote this; she even goes so far as calling Stalin “the Georgian serpent.”

Ginzburg has such a big sense of humor — often a skeptical one, as author Heinrich Böll points out in the introduction, but it colors her telling of any anecdote, and often makes her story unexpectedly delightful or uplifting. It’s not always easy reading, but impressive to see her make the life that she can despite the difficulties and limitations of a system designed to break her completely — mentally, emotionally, physically. She was the one who beat it instead. After her release, she adopts a child, eventually finds work, and lives with the love she found and, miraculously, considering the circumstances, was able to keep.

And she’s reunited with one of her sons, where she faces the unimaginable task of trying to explain what happened in all that time. She says that he became the first listener of the chapters that became her first memoir.

It’s unclear to me why Journey into the Whirlwind is considered a classic amongst Gulag accounts, and Soviet memoirs in general, and never goes out of print while Within the Whirlwind is out of print and a bit tricky to find. I’m a used-book obsessive and there aren’t even many affordable secondhand options on Amazon, but it’s worth waiting for one to surface or tracking down. My copy came from someone in Tarrytown who obviously had really loved it, as they’d marked it up extensively and I loved seeing the bits and lines that spoke to them. It felt like sharing something special.

A remarkable, sometimes near-poetic account of an extraordinary life that deserves to be more widely read and known.