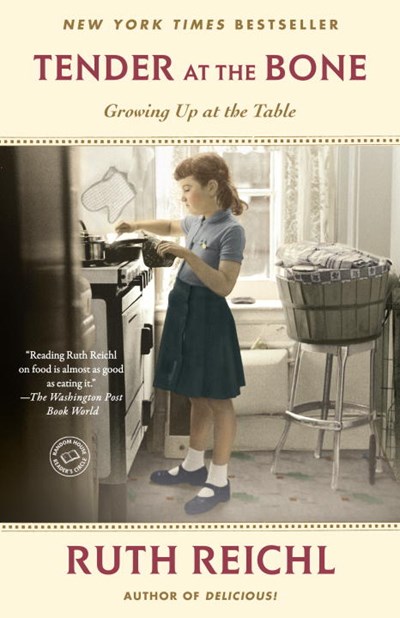 Food writer, magazine editor, and restaurant critic Ruth Reichl’s first memoir, Tender at the Bone, is a significant one in the “foodoir” genre, blending recipes into stories and scenes from a life. It covers the connections she made in her early life with food and cooking, laying the groundwork for the prominent career she’d one day have, and follows her through adolescence and early adulthood as she copes with mental illness in her family and begins to find herself in the kitchen through the people in her life.

It includes recipes for some meals that had significance for her in the anecdotes shared. I didn’t get much from these, I only bookmarked a simple one for con queso rice. They’re heavy and definitely of a certain type — sauerbraten, wiener schnitzel, chicken liver pate, veal breast, boeuf bourguignon — so unless these match your tastes maybe don’t expect much in this department.

It opens by establishing how disastrous her mother’s kitchen endeavors were — think food poisoning disastrous. She spins heartfelt yarns about how she tried to save these meals (and the eaters of them); about her father, a bookbinder, and his heritage; about their maid and an elderly aunt who taught her more about cooking and served as stable maternal figures.

She also covers how food translated to friendship when her mother sent her to boarding school in Montreal to learn French. Lonely and with her hometown of New York City feelings worlds away, Ruth finds joy in exploring local eateries, and eventually builds a deep friendship this way. It’s clear that food has been her saving grace her entire life, and the passion with which she writes about it feels contagious and uplifting.

Like a hearing child born to deaf parents, I was shaped by my mother’s handicap, discovering that food could be a way of making sense of the world.

Ruth’s mother had bipolar disorder. It’s a story that opens the book strikingly then mostly fades into the background, reappearing throughout the narrative sporadically but always exerting a heavily felt presence nonetheless. It obviously affected Ruth deeply, but she has an interesting way of not dwelling on upsetting situations, even as she includes many challenges she’s faced, but rather showing how she found her way out of them. For those who appreciate a troubled family story and what it’s like to grow up in this dynamic, Ruth crafts this story so eloquently.

I didn’t want to have one of those intimate conversations my mother conned me into, the ones where I said more than I meant to and regretted it later.

Some of the stories, particularly from her teen years, felt a little suspiciously crafted, however. She includes an honest introduction with an anecdote about the fallibility of memory — how people can remember the same events differently. But something about it, maybe in combination with so much dialogue or direct lines of speech, made me wonder about the neatness of it all. I suspect there was a good bit of creative composition here, or at least creatively stitching together events for a neater narrative.

But overall this was a wonderful memoir, and gave so much insight into her early life, flaws and all, along with a powerful story about growing up and becoming independent from a troubled mother.

I was slowly discovering that if you watched people as they ate, you could find out who they were.

As the book draws to a close, it’s the ’70s and Ruth is in California where she’d become active in the Berkeley restaurant and communal living scenes. She’s writing her first restaurant reviews, and an editor comments that she was “born for” this work. She demurs, saying she was instead “very well trained.” It’s a sweet message that’s underscored throughout, of how a wide range of elements and people shaped her throughout her life, allowing her to grow into her profession with a wealth of knowledge culled from many different corners of the world and cultural experiences. Easy to see why it’s a modern classic among food memoirs, and a great introduction to Ruth’s warm personality and skill in food writing.

Tender at the Bone: Growing Up at the Table
by Ruth Reichl
published 1998

18 thoughts on “Ruth Reichl’s Beginnings in the Kitchen”