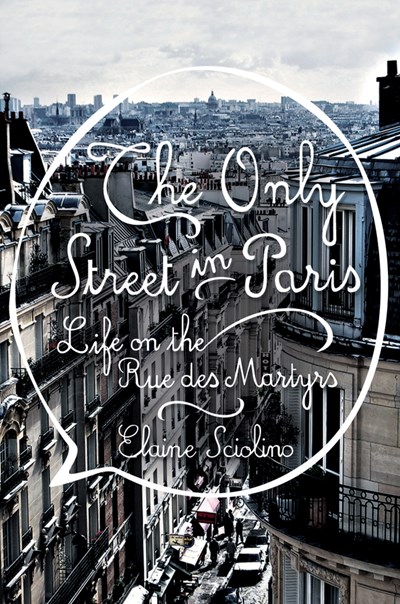 Book review: The Only Street in Paris, by Elaine Sciolino (Amazon / Book Depository)

Former New York Times Paris Bureau Chief Elaine Sciolino’s The Only Street in Paris is a travelogue memoir meets micro-history and sociocultural study of the Parisian street where she and her family made their home for a time. There’s a lot going on, but the busyness just seems to mirror the profiled street and feels appropriate.

The Rue des Martyrs is in the Pigalle area of the fabled Montmartre district, running through the city’s ninth and eighteenth arrondissements. It’s a little-known street with a big presence in history. As Sciolino describes it:

The rue des Martyrs does not belong to monumental Paris. You won’t find it in most Paris guidebooks… It lacks the grandeur of the Champs-Élysées and the elegance of Saint-­Germain. Yet it has made history. On this street, the patron saint of France was beheaded, the Jesuits took their first vows, and the ritual of communicating with the dead was codified. It was here that Edgar Degas and Pierre-Auguste Renoir painted circus acrobats, Émile Zola situated a lesbian dinner club in his novel Nana, and François Truffaut filmed scenes from The 400 Blows. The rue des Martyrs is mentioned in Gustave Flaubert’s Sentimental Education, arguably the most influential French novel of the nineteenth century, and in Guy de Maupassant’s Bel-Ami, a scandalous tale of opportunism and corruption. More recently, Pharrell Williams, Kanye West, and the band Phoenix came here to record songs at a state-of-the-art music studio.

The rue des Martyrs is not long—about half a mile, no longer than the stretch of New York’s Fifth Avenue between Rockefeller Center and Central Park. But its activity is much more concentrated: nearly two hundred small shops and restaurants are packed into its storefronts.

Sciolino and her family took an apartment there, after researching the potential danger of living above a shop selling fireworks. She quickly fell in love with her neighborhood and neighbors, and the longer she stayed, the more she absorbed of the street’s unique, quirky personality, and the rhythm of its new and longtime residents, pedestrians, shops, cafes, and landmarks. She explores a different resident or location in each chapter, highlighting the importance to the street and the wider neighborhood, and looking at the present appearance and role against its historical one, or how the significance has changed. She covers the street’s part in French literature, history, culture, religion, nightlife, music, food and dining.

Grocers are a big focus, as the street is packed with various specialty food shops (cheese, naturally), small groceries, cafes and the like. She explains that writing this affectionate but honest “love letter” to her adopted neighborhood began with the closing of a family-owned fish store, a sad event but an unsurprising one. This sets the scene for the inevitable topic in any look at an urban environment’s past and present: how the old ways are changing and the new ones can be a mixed bag. But then again, change is the only constant, and the Rue des Martyrs has seen that like anywhere else:

The street has been adapting, fighting, and succumbing to change for more than a century. It wins one and loses one. The net result is that something essential remains unchanged.

There’s a whiff of elitism, which I feel bad even mentioning because she makes an effort: she’s quite a generous person and extremely appreciative of the generosity of others. But at the same time, while secondhand shopping, referring to a used mink coat as “luscious,” noting that she’s “never been a mink coat kind of gal,” but accepting the gift of one is kind of icky. And since her secondhand shopping partner is Arianna Huffington, once notorious for not paying her Huffington Post contributors but who delights Sciolino with the juxtaposition of her fancy self with her cheap used finds, the elitism is uncomfortably felt.

It does have some wonderful moments of levity. My favorite is when she desperately tried to rescue a sentimental-value sign from a closed video shop to gift to its former owner. The situation got complicated quickly, and as she resorted to negotiations with a worker about when she could pick the massive thing up and the logistics of doing so, she observes, “By now the workman understood that he was dealing with a lunatic.” I waffled between whether I liked having her as a guide to this street and when I felt like it wasn’t a good match.

It closes on a lovely if somewhat cheesy note: Sciolino hosted a potluck, bringing together her neighbors from the street’s different ends in the two arrondissements it straddles, blending worlds that are vastly different despite their proximity and shared address. There’s a message of kindness and community here, a sense of all-in-this-together, and plenty of history not easily found elsewhere, but my interest waxed and waned depending on the topic and the narrative voice didn’t always draw me in. It has its moments though, and it’s clear why the street and its ways captivated the author. 3.5/5

The Only Street in Paris: Life on the Rue des Martyrs
by Elaine Sciolino
published November 2015 by W.W. Norton

5 thoughts on “One Parisian Street in Profile”