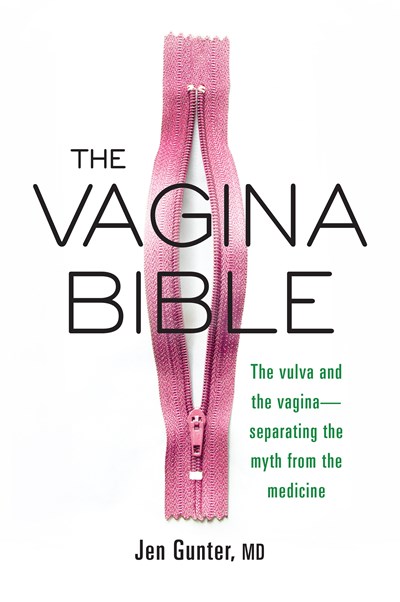 Misinforming women about their bodies serves no one. And I’m here to help end it.

The Vagina Bible is a book that should be owned by anyone who also owns a vagina, and read by anyone who has close contact with one. This review could really end here, but I’ll elaborate in case you’re not convinced.

What I honestly wish for every woman, and I’m not being facetious, is that she find a good gynecologist. To anyone who hasn’t dealt with a bad gynecologist (or, honestly, more than one) that may not seem like a big deal. But oh, how it is.

Dr. Jen Gunter is a good gynecologist. You may recognize her, as I did, from her media interviews debunking myths and general nonsense trends that are good for someone selling something and bad for women and their vaginas. She calls out Gwyneth Paltrow and Goop with her recommendations for vaginal steaming and jade eggs, but there’s no shortage of unfortunate trends and practices that are affecting our understanding of our own bodies and our healthcare.

She also blogs about issues she’s encountered in her practice, especially ones that seem to have patients mired in misinformation, and has a docuseries on CBC called Jensplaining, so she’s seriously dedicated to providing women with facts and eradicating dangerous, frustrating untruths. I could not be more on board with this.

This book is a comprehensive compendium of those debunking and educational efforts — informative with clear, evidence-based reasoning against myths or claims, told in an easily accessible way. She gives examples of her own mistakes, which was reassuring, and sometimes takes a chatty tone that’s perfect for the content, helping to make it memorable. Which is important considering a lot of these myths are pretty firmly entrenched over our lifetimes. Like this old chestnut:

Almost every woman has been told at least once (and often more than once) to wear white cotton underwear as a medical recommendation to prevent yeast infections and other vaginal mayhem. This makes it sound as if vaginas and vulvas are accidents waiting to happen. The vulva can handle urine, feces, and blood, and vaginas can handle blood, ejaculate, and a baby, so this idea that a black lace thong is the harbinger of a vaginal or vulvar apocalypse is absurd.

And sometimes she’s just hilarious, like about how serious it is that you never douche: “DOUCHES: These are cigarettes for your vagina.” You’re not likely to forget the big points here.

She starts with basic anatomic explanations; “everyday and maintenance” topics like Kegel exercises, the effects or lack thereof from food, “the bottom line on underwear”; cleansing; hair removal; menstrual products and mythology; menopause; medications; STIs; conditions like yeast, BV, UTIs; how to explain symptoms to your doctor; rehabbing your medicine cabinet; old wives’ tales and how to use the internet for reliable information. And lots more. It is thorough. She also includes information specifically for trans individuals and for non-hetero sex and issues.

As informative as so much of this was, a lot of it made me angry. I can’t believe some of the things other doctors have done or told me or friends, or that men have been ignorant about or unconcerned with. I had to put it down sometimes and calm down. So much misinformation exists about so much for women, and Gunter makes a good case for why that is. She details how knowledge about female health is actually far behind men’s, for many reasons: medical students couldn’t dissect female cadavers, penises were considered more important anyway, etc. It goes on and on. But it’s disappointing that even today so much bullshit is still propagated as fact.

Or how much useless junk is marketed to women to clean and purify our legendarily dirty vaginas (GWYNETH) or the idea that doctors are willing to cut off labia pieces because someone thinks they’re too big. She traces as many of these back to their foundations in the patriarchy as possible and it’s upsetting. But better to be informed, and it all just seems the more ridiculous in her telling:

I’ve stared at more male butt cracks (gluteal clefts) than I care to remember, whether it was just some guy bending over or gravity-defying pants that appear to hover like magic just above the anus without a belt. What I never hear is that men should seek out plastic surgeons to get their gluteal clefts sewn shut. I also can’t imagine a similar industry for men that profits from surgically trimming penises so they look better in tight jeans.

She has pithy, data-sourced counterarguments for every nonsense claim. Like all the suggestions for various foods to stick up your vagina when something is wrong rather than scientifically approved medicines: “The remedy is most definitely not at the grocery store.”

Or the ridiculous moral-based arguments against certain treatments, like the HPV vaccine: “Vaccinating kids does not make them more likely to have risky sex. This has been proven by studies. (Also, no one worries that teaching kids to buckle up produces unsafe drivers.)”

This isn’t a book to read straight through. Although it’s undeniably fascinating, occasionally mind-blowing and always written in an easy to absorb way, including a summary of main points at each chapter end, it’s a lot to immerse yourself in. It’s still one to read in its entirety, as you may be surprised at what turns out to be helpful, and absolutely one to buy, not borrow. I promise that even if you think you already know what you need to know, there’s more.

And above all, it’ll just make you feel better. So many of the things that have been made out to be women’s fault — in maintaining our own health or just owning the parts that we do, however they look, smell, or operate — are beyond our control or we’ve been misinformed about. And it’s not all ancient prejudices against women. A lot is modern wellness gurus, homeopathy, snake oil cures for problems that don’t actually exist, marketing, and morals.

One point that she repeats throughout and I really appreciated was her fight against the option for treatments, supplements, dietary changes or restrictions that aren’t medically proven but are often suggested with a “can’t hurt” shrug.

I call these types of interventions, like wearing cotton underwear or emptying your bladder after sex, the burden of “well, it can’t hurt.” But they truly are a burden. Every time we make a woman jump through a useless hoop to get better, we add a burden, be it financial, or emotional, or the exasperation of doing so many things and yet realizing that you are running very hard but not getting anywhere.

If there’s something worth trying, she lets you know the how and why of it. Being an informed patient and able to advocate for your own health is crucial, whether it’s with your doctor, partner, or anyone perpetuating ignorance. This comprehensive, empowering, intelligent guide will help.

The patriarchy and snake oil have had a good run, but I’m done with how they negatively affect and weaponize women’s health. So I am not going to stop swinging my bat until everyone has the tools to be an empowered patient and those who seek to subjugate women by keeping them from facts about their bodies have shut up and taken a seat in the back of class.

The Vagina Bible:
The Vulva and the Vagina — Separating the Myth from the Medicine
by Jen Gunter, MD
published August 27, 2019 by Citadel