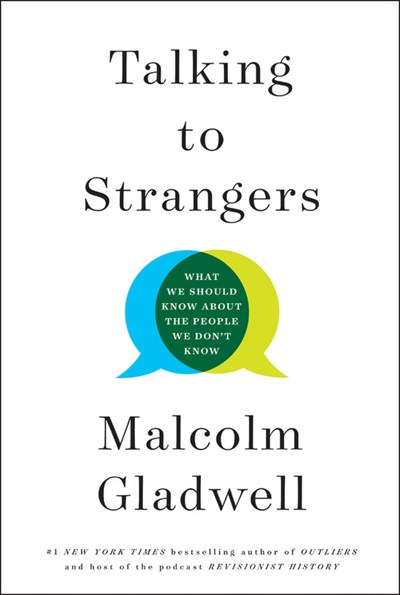 We think we can easily see into the hearts of others based on the flimsiest of clues. We jump at the chance to judge strangers. We would never do that to ourselves, of course. We are nuanced and complex and enigmatic. But the stranger is easy.

This was my first Malcolm Gladwell book. I couldn’t summon much interest in his topics, and the covers repel me (yes, I know we’re not supposed to judge them, but there is something intentionally signaled by cover art and his always scream that I’m going to be bored).

But I was intrigued by the stories featured in this one — including Sandra Bland, Amanda Knox, Sylvia Plath, Bernie Madoff:

In all of these cases, the parties involved relied on a set of strategies to translate one another’s words and intentions. And in each case, something went very wrong. In Talking to Strangers, I want to understand those strategies—analyze them, critique them, figure out where they came from, find out how to fix them.

I can say I’m glad I finally read something of his, and I understand now why he’s such a popular author. This is easily palatable pop psych with fascinating trivia plus memorable examples of his points that readers will no doubt be able to find applications for in their own lives and mindsets. You’ll feel a bit smarter for having read it. But is he right about all of his assertions? I’m torn.

The gist of Talking to Strangers is that our miscommunications, misuse of transparency (meaning that we think we can understand something about people’s interiors by their behavior and self-presentation), and default to believing that people are telling the truth leads to a lot of dangerous, even deadly, mistakes in our interactions with strangers. He opens the book with Sandra Bland, a black woman pulled over by a white Texas police officer for failing to signal.

After a verbal altercation caught on dash cam (and a remarkably mild one at that, obvious if you’ve watched any episode of Cops or Live PD) led to her arrest, primarily because the cop was following a specific mode of policing that caused him to misinterpret circumstance and behavior of this out-of-state stranger, Bland committed suicide in jail three days later. Gladwell asserts that if the officer had known her, he might’ve pulled her over and said cheerfully, “Hey Sandy, be more careful next time,” (paraphrasing).

Sure. But it’s a big yet simplistic leap between that and how we talk to and understand strangers having such great impact. Still, learning about the flawed methodology the cop was applying was revealing and did explain some elements. Again, I’m torn. The evidence is there, but I’m not sure I trust the analytical interpretation.

This had the strange effect of being highly researched and yet feeling anecdotal. Perhaps that’s what made it seem overly simplistic. We already know much of it — that law enforcement misinterprets the behavior of people who are a bit weird or “off” (Amanda Knox), that people in general are bad at knowing when someone’s lying — and although his examples are mostly solid and stories well told, I didn’t get anything groundbreaking here.

Some are poorer examples: In a footnote, he cites a psychologist who argues that Boston bomber Dzhokhar Tsarnaev‘s smirking in court when a photo of him flipping off the camera was shown wrongly influenced jurors, because Tsarnaev is from Chechnya, and different expressions of strength, masculinity, etc. apply instead of American ones of showing remorse. Except he is a naturalized American, and by all accounts was well integrated and acclimated in the US. So that argument could have some relevance, but is unhelpfully broad and lacks the evidential confirmation of cases like Bland’s and Knox’s.

So although enough of Gladwell’s conclusions make sense, and have been reached by plenty of experts before him, I found myself disagreeing with many. One story touched on throughout is of British prime minister Neville Chamberlain personally meeting with Hitler, securing the infamous promise for “peace in our time.” But after taking the Sudetenland, which they’d established as permitted, Hitler annexed the rest of Czechoslovakia and invaded Poland. Chamberlain was flabbergasted, having trusted Hitler’s word.

Gladwell points out he was the only leader among what would become the Allies to have met Hitler in person; that’s why he bought his false promises. Chamberlain trusted Hitler from in-person misunderstandings; that tendency we have, he says, to default-believe people are telling the truth.

But he conveniently avoids any mention that Stalin signed a non-aggression pact with Hitler (technically with Ribbentrop, but with Hitler’s approval) mutually promising they wouldn’t invade each others’ lands or interfere in conflicts. Stalin refused to believe Hitler would break this pact until it was too late. But Stalin never met Hitler in person, so what’s his excuse? Gladwell builds a big argument on Chamberlain’s mistake revolving entirely around meeting Hitler, but just ignores a similar situation involving another leader who didn’t meet him but had the same outcome.

It’s one example of premises being flimsy. I was also especially uneasy with the chapter addressing Brock Turner’s rape case. Gladwell posits that alcohol makes us ineffective communicators (duh), blanks out memory thanks to hippocampus impairment and that’s why we can’t remember signals or signs that we would’ve more easily and accurately interpreted when sober. I refuse to believe that raping an unconscious person falls into any acceptable argument here. It was a weird, inappropriate example.

On the flip side, there are plenty of engrossing stories, and it’s written compellingly. I didn’t even notice that I’d spent an entire evening reading it until it was midnight – it’s one of those. The chapter addressing the suicides of Plath and Anne Sexton was interesting, and the best were the espionage chapters. These were the most insightful: former colleagues, even faced with evidence that their coworker was connected to suspicious circumstances, defaulted to believing what the double agents said. They acknowledged oddities or signs only in hindsight.

These moles — Aldrich Ames, Ana Montes — weren’t even particularly good or savvy spies. Ames didn’t hide the massive amounts of extra money in his bank account; Montes kept her codes in her purse, a shortwave radio in her closet, and a boyfriend specialized in Latin American intelligence who was clueless. That’s on us, Gladwell argues: “The issue with spies is not that there is something brilliant about them. It is that there is something wrong with us.”

But he makes the counterargument, with amusing examples from the Bernie Madoff case, that excessive vigilance isn’t the way to go either. So what to do? I can’t say I felt a strong game plan from any of this, besides be aware of your own biases and trust your instincts, but don’t trust them TOO hard?

Interesting ideas, compelling to read, but either overly obvious or start pulling on a few threads and it unravels. 3/5

Talking to Strangers:
What We Should Know About the People We Don’t Know
by Malcolm Gladwell
published September 10, 2019 by Little, Brown