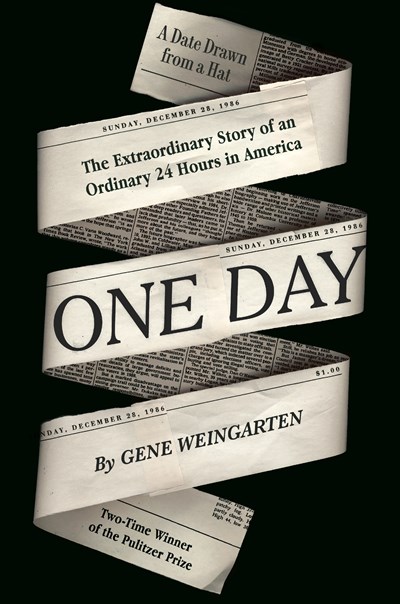 Select an ordinary day at random, report it deeply, then tell it like it happened — from midnight to midnight, the most basic, irreducible unit of human experience. Ideally, the more you’d learn, the more firmly you’d establish that in life, there’s no such thing as “ordinary.”

Two-time Pulitzer Prize-winning Washington Post journalist Gene Weingarten and a colleague developed an interesting idea for a journalism project: pick a date from the past at random and research it from various angles to see what events transpired within those 24 hours and what effect they’ve had since. As premises go it’s a bit gimmicky, but undeniably intriguing nonetheless.

Sitting with this colleague in a restaurant, they allowed two kids and their waitress to select the date, month, and year out of a hat. Disappointment struck: it was December 28, 1986; a Sunday, notoriously the week’s slowest news day, in one of the sleepiest weeks of the year, between Christmas and New Year’s. They considered scrapping that date — no one would know, after all — and pulling another one.

But they stayed honest and saw the project through as it had shaken out. The resulting stories are such a varied mix of topics — haunting, touching, serendipitous, far-reaching in their implications — that it’s hard to imagine they almost considered a different date when this turned out to be such an incredible one. But that’s the point, isn’t it — no day is insignificant.

It would be one day presented microscopically and panoramically, from deep within but also high above, able to see forward and backward in time — applying the added, illuminating benefit of that fourth dimension.

There was something surreal about reading these, organized chronologically beginning at 12:01 a.m., considering the impressive depth and detail that Weingarten provides around each. He builds the story compellingly until reaching its significance is clear, emphasizing meaning especially with the benefit of hindsight. And you’re hit with the thought that all these momentous happenings were taking place on the same day as all the others, just one day contained all this.

If Weingarten wanted to make a point about how much a single, seemingly insignificant day encompasses, how extraordinary even the ordinary is, he accomplished it marvellously. It seems simplistic, because of course this is how things work, but the impact is unexpectedly powerful. “Power can also lurk in the latent and mundane,” he observes, and proves it.

Some of the day’s events led to monumental developments of some kind. A college student’s murder — her body was found on the day — led to the federal government’s awarding “the first national grant for research in DNA forensics to the sexual assault unit at a medical center in Seattle. It would be the start of a revolution in public funding for DNA testing.” Another crime story becomes a record-setting transplant, when a murderer’s heart is implanted in a nursing student.

Other stories include a survivor of a helicopter crash, a group of Russian emigres leaving New York in a propaganda blitz, the lingering effects of a devastating house fire on a baby, and a lawyer in Iowa who knows his gender isn’t the right one. Some stories are more affecting than others, a few were letdowns that lacked the impact others delivered (an early confessional blogger comes to mind here).

But it’s worth it for those that show the brilliant humanity in easily overlooked moments. In a chapter reflecting the burgeoning AIDS epidemic, theater director and choreographer Michael Bennett met with a lawyer to add a codicil to his will, bequeathing a percentage of his estate to AIDS research and treatment. Here’s how that’s played out:

As it turns out, Bennett’s final generosity was literally bottomless. His bequest was permanent, meaning that for the last thirty-odd years, as residuals kept pouring in from all over the country from the hundreds of small and large and amateur and professional performances of A Chorus Line and Dreamgirls and other famous Bennett works, a percentage still goes to AIDS research and to comforting the afflicted.

Weingarten is a skilled writer, to say the very least, but I had some unusual annoyances in the writing, especially the vocabulary. I won’t call out specifics because I haven’t checked against the finished copy, but I think even Pulitzer winners need good editors, preferably even editors from a different (read: younger) generation. I know how arrogant that sounds, but repetition of favorite words and some awkwardly out-of-date phrasing bothered me and was the first issue keeping this from being perfection.

The second is that I couldn’t muster any interest in the sports stories, although I tried to get through them because Weingarten has an exceptional ability to distill meaning and significance from his chosen anecdotes and I was curious what he’d draw from them. But I couldn’t manage it. This shouldn’t deter others, and there were, I think, only two such chapters.

Although the premise is a stunt, and the author admits as much, the end product outshines any residual tackiness from that. He makes a good case for stunts too, pointing out their value in “illuminat[ing] unexpected truths.” One Day also overrides the potential drawback of lacking any unifying thread tying its stories together. They’re just slice-of-life pictures, but they speak volumes. There’s a rich sense the reader is left with, of nothing happening in a void and nothing being insignificant. The ripple effect can be eerie; goosebump-inducing. What an amazing world we live in, these stories remind us, some quietly and some a little louder.

One Day:
The Extraordinary Story of an Ordinary 24 Hours in America
by Gene Weingarten
published October 22, 2019 by Blue Rider Press

10 thoughts on “Slice-of-Life Stories From A Random Day”