Fall publishing season is in full swing and so many new books are out this month. Let’s do some mini-reviews of a few October new releases, shall we?

This book is full of women who are not like anybody else — women who, in their singular ways, stood up for their lives, as they envisioned them, and in so doing, shaped the lives of multitudes.

Can we ever have enough of that kind of biographical writing? I would argue no. Vanity Fair has a reputation for profile pieces that take unique angles in approaching their subjects, and this collects profiles of influential women written by female journalists over the last several decades.

They’re divided by category: comedians, the White House, society and style, “stars”, “renegades”, musicians, the House of Windsor, and a selection by subjects “in their own words.” (Monica Lewinsky’s “#MeToo and Me,” which opens with her running into Ken Starr at a New York restaurant, was a highlight.)

A surprise favorite was “The Lady Has Legs!” on Tina Turner, a comprehensive profile that hits many of the highs and lows of her life in striking detail, like that “36 cents and a Mobil credit card” were all she had with her at the moment she escaped Ike. I also loved Laura Jacobs’ “Our Lady of the Kitchen” about Julia Child, which proposed a lovely idea: “I think one of the reasons that–this is my personal theory–she wanted to write all these recipes down and transmit them to Americans is it was a form of distilling experience, almost like a short story or poem.”

I especially enjoyed the politically themed ones, like a look at Michelle Obama during the first time campaigning with Barack and a portrait of Hillary Clinton from back in Arkansas, including how she handled early scandal.

I found myself less intrigued by the actresses, royals, and “society and style” figures, as distinctive as the angles they took were. It seems you do need some existing interest in most of the subjects, or at least a solid knowledge of who they are, to appreciate these. If enough of them appeal it’s a solid collection celebrating these women, both subjects and writers. (Amazon / Book Depository) 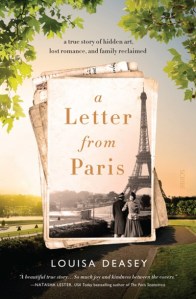 A Letter from Paris: A True Story of Hidden Art, Lost Romance, and Family Reclaimed, by Louisa Deasey, October 1

Australian writer Louisa Deasey got a Facebook message from a woman in France who had found letters from Deasey’s father, Denison, to her grandmother Michelle. It led Louisa to investigate her father’s life in Europe before he met and married her mother. Much of his life was shrouded in mystery, especially since he died when Louisa was a child. She began poring through papers her mother had donated to the library and travels to France to meet this contact with a bridge to Denison’s past, and to reconnect with her father’s first wife.

There’s a lot of repetition as we get her thought process and feelings, and the connection she felt to her “French family” — that is, Michelle’s family. At some point it becomes skimmable as it’s the same lamentations and worries over and over. Deasey seems to feel the need to convince the reader of her feelings or motivations, or to clarify her reasons for immersing in research and the curiosity about her father’s life to begin with, but it’s overkill.

At times the story is touching, and Denison lived an interesting life as a pivotal figure in a tight-knit set of Australian writers and artists in postwar Europe. It’s meaningful to see how this exploration settled the author’s mind and clarified her relationship to the father she’d never really known. The promised aspect of secrets never really materializes though, and an element of excitement is lacking. It’s clear it’s very much of personal interest but as an outsider I didn’t feel invested, and the more curious elements, like his wandering eye and second family with an “unconventional” relationship to his first wife are generally breezed over.

The writing varies; it’s compelling to begin but eventually reads like an unedited diary with added filler. Might be more interesting to readers familiar with some of the Australian scene figures or those involved in difficult familial research. (Amazon / Book Depository)

The Problem With Everything: My Journey Through the New Culture Wars, Meghan Daum, October 22

Essayist Daum touches on the hot-button sociopolitical topics on the cover, drawing on her Gen-X perspective to frame reactions to the cultural moment. Her takes are delivered kindly, even when she knows her often politically incorrect opinions aren’t mainstream, and with a sense of bewilderment as she uses her experience to highlight why the current landscape, like of call-out and cancel culture, feels foreign and potentially troublesome to her.

There are lessons to take from differing generational perspectives, even when there are fundamental clashes with what’s loudest in the public discourse. Above all Daum seems to be arguing for nuance — absolutely worthwhile. But her arguments are thin and scattered, and it’s clear that, as she explains, this book started as an examination of fourth-wave feminism and morphed into something else in the wake of the 2016 election and all that’s come after.

She still demonstrates the ability I appreciated in The Unspeakable, to address larger cultural topics while weaving in her own experience without making it uncomfortably all about her. But these are less focused on the personal in favor of the sociopolitical, and since her arguments were fairly weak or seemed merely for the sake of making a contrarian point, it suffered. Which is a shame, because there are good arguments to be made about nuance within things like #MeToo, and she starts toward it but it’s almost like she’s too frustrated and tired to properly see it through.

She’s strongest when she’s writing about her personal life and how it folds into the wider world. I would love to see her make a return to that, where she often shines, instead of this kind of analysis. (Amazon / Book Depository)

The Life and Afterlife of Harry Houdini, by Joe Posnanski, October 22

Why Houdini? … Why is it that everyone still knows, still cares about, still idolizes Ehrich Weiss, a vaudeville escape artist who died at a time when the Orthophonic Victrola phonograph was still being called “the miracle of the age”? How is it that this little man who slipped from handcuffs and jumped off bridges and shook himself loose from straitjackets still inspires wonder and awe in our cynical and jaded technological world?

After reading Through a Glass, Darkly last year, I was curious about Harry Houdini’s obsession with spiritualism, specifically his frenzied attempts at debunking it.

That’s a common reaction, according to Joe Posnanski, in this latest biographical book about the most famous magician. He makes clear, with some distaste, that it’s not what he finds most interesting: “I don’t care much about Houdini’s late-life exposure of mediums. There are many people, countless people, who are obsessed by this chapter of his life [note from Rennie: guilty!] …The last years were filled with controversy and threats and triumphs; in many ways this was the battle Houdini was born to fight. But I can’t lie: It bores me. I prefer the escapes. I’d rather talk about magic.”

So the “afterlife” of the title refers to how Houdini has lived on in public consciousness and among followers and devotees, and continues to inspire magicians today. This wasn’t what I expected so was disappointing, but that’s probably on me.

Posnanski explores facets of Houdini’s life — and I stress facets, as this isn’t a comprehensive biography — in connection with modern-day magicians and keepers of his legacy, at places like the Houdini Museum in Scranton, Pennsylvania.

It focused too much on other people for my interests, which was really only to learn something about the weirder side of Houdini’s life. But that’s not to say it isn’t good for what it is. There are more than 200 biographies of Houdini, so it takes something special to set one apart, and the approach this one takes manages that. It’s a unique method, to look at significant moments and myths through the lens of those who have been strongly affected and still inspired by them today.

Posnanski also does a fair amount of what Douglas Smith did in his biography of Rasputin, which is to debunk the more persistent myths. My favorite was the story about Houdini’s trick of ringing the Kremlin bells, apparently a tall tale spread by Orson Welles (!) (Amazon / Book Depository)

Have you read any of these? What new fall releases are you excited about?

These titles were provided to me as advance copies courtesy of the respective publishers for unbiased review.