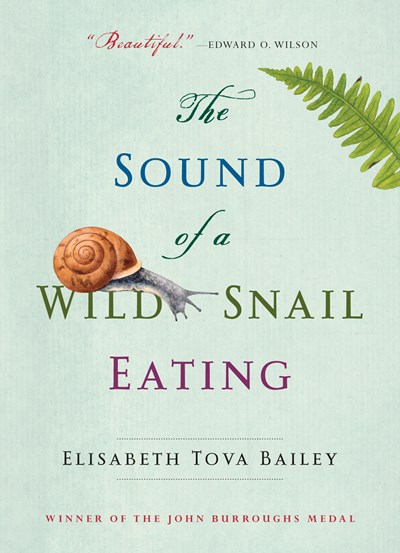 Twilight vanishes the hills into the mountains; then all is lost to the dark.

Elisabeth Tova Bailey was at the end of a vacation, staying at a hotel in an Alpine village, when she started to feel ill. Her health worsened after returning home. The mysterious illness, which couldn’t even be pinpointed as a viral or bacterial pathogen, eventually rendered her bedridden. It had its improvements but many relapses, disrupting her life for years to come.

I had thought I was indestructible. But I wasn’t. If anything did go wrong, I figured modern medicine would fix me. But it didn’t. Medical specialists at several major clinics couldn’t diagnose the infectious culprit.

When the body is rendered useless, the mind still runs like a bloodhound along well-worn trails of neurons, tracking the echoing questions: the confused family of whys, whats, and whens and their impossibly distant kin how.

The Sound of a Wild Snail Eating is a gentle, meditative look at how she made it through a terrifying ordeal and the snail that helped her see beyond herself and her restricted life. Bailey’s writing is thoughtful and peaceful — she’s healthy now and can look back on this from a more secure place. Her writing is so lovely and strangely soothing, and even if you can’t help but feel all of this alongside her, it’s not scary or upsetting as might be expected.

She couldn’t live in her beloved home once she couldn’t care for herself anymore, instead moving to a studio apartment where an aide cared for her. Passing the time in this newly shrunken world each day, in addition to suffering symptoms like dizziness that left her unable to sit up for long, was a challenge all its own.

Time unused and only endured still vanishes, as if time itself is starving, and each day is swallowed whole, leaving no crumbs, no memory, no trace at all.

A friend brought her a pot of violets for her windowsill, including a snail she’d come across in the Maine woods on her way to visit. The snail offered Bailey the prospect of seeing another whole life being lived next to her, and feeling the significance of it, something slow and methodical that she wouldn’t have noticed if she hadn’t been reduced to the snail’s speed herself.

Watching another creature go about its life . . . somehow gave me, the watcher, purpose too. If life mattered to the snail and the snail mattered to me, it meant something in my life mattered, so I kept on . . . Snails may seem like tiny, even insignificant things compared to the wars going on around the world or a million other human problems, but they may well outlive our own species.

Bailey was so affected and changed by watching the snail that when her health finally started to rally, she delved into researched these fascinating invertebrates. The book is peppered with quotes and writings from nineteenth-century naturalists who studied snails and their biology, and Bailey moves between her life with the snail and what she would learn about these creatures and their amazing existence later.

It’s incredible what this tiny little gastropod was able to do for her, when a worst-case scenario illness altered the course of her life — something most of us find hard to imagine, with details I’d never have considered.

In the evenings there was a short but satisfying time when I knew the rest of the human world would join me, if just for the night, in my recumbent lifestyle. When healthy people take to their beds, they sink deeply into a privileged sleep. But with my illness, sleep was diaphanous and often nonexistent. The snail… came to my rescue. As the world fell into sleep without me, the snail awoke, as if this darkest of times were indeed the best of times in which to live.

Bailey draws parallels between her situation and the snail’s, how her circumstances could be viewed negatively but in the snail’s world the same things are just fine. Being homebound is even a good thing, instead of “a sort of vanishing” as she finds herself experiencing in the human world.

Her observations encompass what her illness felt like and the psychic toll it took, along with the slow but steady way watching the snail and learning its habits made her find a way back to herself in this darkest of times. It was moving, sensitive, and gorgeously expressed, and I found there were lessons here with universal connections, not only to an extreme situation like hers. Maybe that’s what made this book and her story such a treasure — she found a way to make this completely harrowing experience and its takeaways feel not only fathomable, but broadly relevant.

And then there are those amazing snail facts she learned once her health improved:

In terms of size, mammals are an anomaly, as the vast majority of the world’s existing animal species are snail sized or smaller. It’s almost as if, regardless of your kingdom, the smaller your size and the earlier your place on the tree of life, the more critical is your niche on earth: snails and worms create soil, and blue-green algae create oxygen; mammals seem comparatively dispensable, the result of the random path of evolution over a luxurious amount of time.

This was an exquisite piece of writing and window into a hard-to-fathom experience, although her considered descriptions of what she felt make it palpable. I’m in awe of what she survived and the resilience she showed, not to mention the graceful way she tells it, while weaving in impressive and surprisingly fascinating details about the little but mighty creature that unknowingly helped her through.

Naturally solitary and slow paced, it had entertained and taught me, and was beautiful to watch as it glided silently along, leading me through a dark time into a world beyond that of my own species. The snail had been a true mentor; its tiny existence had sustained me.

I hope the terrestrial snails, secreted away in their burrows by day across the earth’s vast landscapes, will continue their mysterious lives, gliding slowly and gracefully through the night, millions of years into the future.

17 thoughts on “A Wild Snail and a Story of Survival”