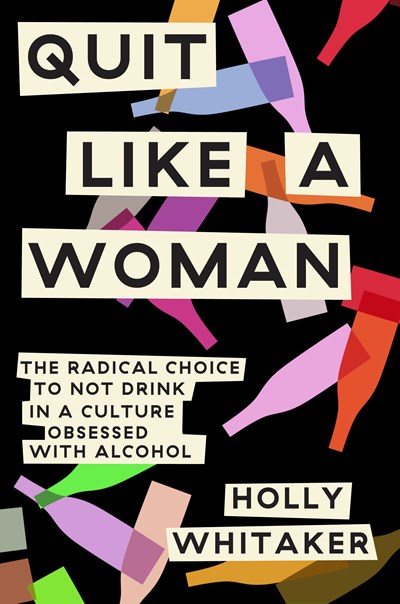 Women are drinking more than we ever have before. Between 2002 and 2012, the rates of alcohol addiction among women rose by 84 percent—as in, it nearly doubled. One in ten adult American women will die an alcohol-related death, and from 2007 to 2017, alcohol-related deaths among women rose 67 percent, as opposed to 29 percent among men. It is a time of radical progression in almost every area of our collective experience—and a time of unprecedented rates of addiction coupled with an almost gross ambivalence toward our personal and societal relationship with alcohol. Here is the time in history where The Future Is Female, the wine is pink, the yoga classes serve beer, and the death toll rises.

As the subtitle of this memoir/cultural feminism study turned self-help book says, we’re obsessed with alcohol. And there’s a strange, powerful, and very purposeful connection between women and alcohol, including how it’s not only been slyly, aggressively marketed to women, but had its dangers massively downplayed and plastered with “Mommy Needs Wine” onesies by our old friend, the patriarchy.

Drinking has become so ingrained in the female code, we don’t even recognize the nearly endless ways it’s pierced our every experience, or even stop to think about the cost of that infiltration.

Holly Whitaker, founder of the Tempest Sobriety School, abused alcohol for years. Of course, like any addiction, it doesn’t arise in a void and was being used as a salve for painful, long-lingering problems. Whitaker was also bulimic, and used casual (and maybe manipulative?) sex as a coping mechanism of sorts as well. There’s a lot going on, but that’s not unusual. Addictive behavior unfortunately has a big crew of shitty friends invited to the same party.

After years of bulimia, drinking, smoking, and using sex to maneuver her career (I am uneasy here, let’s leave it at that) Whitaker finally had her fall-to-your-knees moment, as she describes it. She’d tried AA and hated it, as plenty do, despite it remaining pretty much the go-to for treating alcohol addiction. Which layers on an element of shame, as Whitaker points out, when it doesn’t work for you. Her look at AA’s history and its white male, ultra-religious founding was eye-opening.

Whitaker begins with a frank, highly candid look at her struggles and how her problems snowballed, as well as scientifically outlining how alcohol will always assist that process. You can begin using it to lessen anxiety, ease social interactions, unwind from stress, make sex more enjoyable — any number of these kind of things, but its improving effect on all of them is illusory and the damage very real.

Speaking of damage, by far the scariest information here is a stripped-down look at what alcohol actually is — that is, literally poison. The ethanol we consume is the same as what fuels cars, the same as in rocket fuel. We put that in our bodies. Casually. A lot of it.

If this had ended about a quarter of the way through, it would’ve been a stunning, shocking, call-to-arms that I think is overdue for discussion. But it keeps going, and becomes repetitive and sometimes problematic. It also becomes basically a self-help book around the midpoint, and I don’t like those. Unless something in them really speaks to you, personally, there’s a lot of words that don’t say much or have deeper meaning, and that’s what I felt here.

Whitaker’s aids in recovery include trips to Rome, taking baths with lavender essential oil, yoga, breathing, meditation, and lemon water first thing in the morning (part of the critical method of establishing rituals as stand-ins for drinking and, worth adding, for aiding in overcoming any addiction, compulsive or self-destructive behavior).

But she puts so much emphasis on her own tools that just repeats, and can be obnoxious or even out of reach, for those who can’t jet off to Rome when a head-clearing is in order. Or if yoga classes prove unaffordable (yes, there’s YouTube, but overcoming a serious addiction requires serious commitment and any activity that gets you out of the house, accountable to others, etc. is a boon).

Sometimes she includes things that give me pause, like essential oils and their “specific healing benefits” which just, oh my god, where to begin. How about here. She also mentions kava kava, which is controversial and banned in Germany, France and elsewhere. These are just what worked for her, she’s only mentioning them as personal examples, but it makes me uneasy because there’s no discussion of whether these actually have any merit and what their side effects can be.

It’s also bothersome that some of the cited information seems off, which concerns me about bits that I don’t know off the top of my head. For example, she says that caffeine has a half-life you might still feel “up to ten hours after you consume it.” OK, but that’s the extreme upper end of its possible half-life, maybe even exaggerating it, and the average is 5 hours. I hate this kind of easily parroted information so casually relayed that’s either wrong or misleading. The reasoning is sound: limit caffeine early in the day so you’ll sleep easier, but exaggeration is unhelpful and makes me suspicious.

Nonetheless, I would still recommend this unconditionally to anyone struggling with addiction, alcohol or otherwise. Because you never really know what’s going to work for you and speak to your specific pain and struggle. She mentions Eckhart Tolle several times as being one of the tools in her toolbox — the arsenal of things that help her stay sober, navigate difficult times and conquer cravings.

I picked up The Power of Now at a pivotal moment too, and ultra-cheesy as it sounds, that book helped me climb out a deep, dark hole of traumas that were replaying over and over and for which I had no coping mechanism. I can only assume from its mega-popularity, mass-marketed and perhaps watered-down Buddhism as it is, that it’s had that effect on a lot of people. Which; good. Whatever your tools are, whatever weird or embarrassing or cliched thing helps you get beyond your pain and start repairing yourself without creating more damage in a different way, GOOD. That resonated with me and I was glad she mentioned how his writing specifically helped her, and it’s why I’d still say this could potentially be worthwhile for anyone starting towards addiction or trauma recovery, or sobriety, or just circling the idea that it’s time to break up with alcohol. Just with caveats about some of the information, and that you’ll need to have something in common to really benefit from it.

There were many points raised that are good to keep in mind, regardless of whether you’re dealing with addiction or recovery of any sort. Like that emotions don’t last for more than 90 seconds. How helpful is that? No matter how intense the feeling of heartbreak, loss, anger, isolation, or overwhelming craving for alcohol or doing something self-destructive is, if you can ride it out for 90 seconds, it’s over. That may be oversimplified, and I’m not sure at what point a 90-second emotion turns into a lasting state of mind, let’s say, but it’s one useful technique that makes seemingly unbearable moments bearable.

What prolongs them isn’t emotional wiring gone awry but the stories we lay on top of them that keep our brains dumping more of those chemicals into our system. A prolonged emotional experience is the result of the stories we keep alive in our heads.

So if you can find such helpful bits in her personal story and/or advice, this is well worth it. It didn’t focus as heavily on the historical background as I wanted so to understand more about women’s specific relationship to alcohol and why it’s become the way it is now, besides just 1) money and 2) patriarchy. Maybe it really is just that simple. And the medical and scientific aspects alone are fairly astounding and terrifying, and will certainly make you think twice about a glass of wine even if you’re not addicted.

I found myself thinking about it more positively after I read it than while actually reading. Her message is solid and you can absolutely take from it what you need to, including a wealth of other cited books to investigate. And any alternative to AA deserves attention.

I use my voice, even if it is shaky, even if it is sometimes too angry. I don’t let people convince me that I’m not kind because I am holding a ground that so many women before me were murdered or tortured or imprisoned for holding, or trying to hold.

Quit Like a Woman:
The Radical Choice Not to Drink in a Culture Obsessed with Alcohol
by Holly Whitaker
published December 31, 2019 by Dial Press

35 thoughts on “The Complicated Story of Women, Alcohol, and Sobriety”