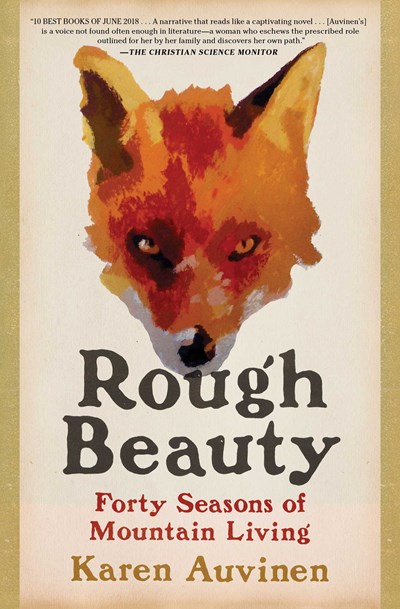 March was thick with anticipation—the pendulum between winter and spring, between dormancy and growth—the month of hope, the month of change. Its arrival meant winter was certain to end. By then, I’d had nearly four and a half months of cold and isolation. And although I loved the quiet—days that were meditative and curving, nights that were icy and full of dreaming, and the kind of luxurious deep sleep that comes when you’re wrapped in layers of blanket and down—that didn’t mean it was easy.

Rough Beauty opens with a fire and ends with a flood, giving the drama of one woman’s life near-Biblical proportions.

I’d lost everything so suddenly and so unexpectedly that the pieces existed now only as vague memories, as rain that does not touch the earth, a presence haunting the horizon.

This is less a story of living in nature and more of a traditional memoir that happens to have a woodsy, mountainous, isolated setting in the Rocky Mountains. Poet and writer Karen Auvinen endured a series of tragedies – including losing 20 years’ worth of writing work, and writes here about rebuilding her life and the joys she was able to find amidst a series of tragedies, setbacks, and lingering old traumas.

I’d scrapped and punched my way to the present moment; it had taken me years to build this fire. What remained was misshapen: my own skin and bones, the years I’d spent walking away, mistaking opposition for independence. It had all led me here.

For forty seasons, Auvinen retreated to a cabin in the Rockies to focus on her writing in the solitude of nature and a pared-down way of life. But as anyone who’s purposely removed themselves from a busy urban setting knows, it’s not always as blissful or peaceful as your imagination of such a scenario might’ve convinced you. Nature can be brutal, in its own behavior and in what it can make you feel or ruminate on.

The lack of community eventually will begin to affect even the most self-sufficient introvert. For Auvinen, it leads to questions about identity and belonging, the latter of which is one of those core-shaking hurts that’s hard to explain when it’s not  right, but Auvinen manages to capture something of it in words, impressively: “Placelessness was a grief deeper than all that had happened.”

The fire that incinerated most of her belongings and her irreplaceable writing, leaving only really her truck and her dog, Elvis, added to this difficulty. But she works to make the best of it, and to learn something about herself and her place in the world.

Real strength, I’d come to realize, lies not in resistance but in softness, the willingness to go unguarded into a new day.

Auvinen’s writing is gorgeous, and it’s clear that her solitude led to deep, meaningful reflection, not only about her present but her past. It comes across as the kind of introspection that most of us would love to be able to get but can’t always access. There are troublesome areas in her past, perhaps not surprising for someone who finds themselves wanting to withdraw. It seems to have been the right decision, as the way she writes about her family and relationships and what she’s drawn from them was surely tough to confront but revelatory.

As an adult, I’d learned to walk away from this kind of crazy—the color of which painted most of my childhood. I remember distinctly the day I realized not all families were like mine, that what passed for normal for us was a cocked and loaded gun. At first I’d felt a gushing relief—it wasn’t me, after all—but this recognition had been followed by a grief so dark and hollow and black, I thought it would swallow me whole. This was my family.

Those among us who can relate rejoice.

Where I didn’t like this was how much it came to be about her dog, Elvis. He was her sole companion for most of this time so that makes sense, and (please don’t hate me) I have to admit I’m not a dog person so it’s just not something I find all that interesting to read about. For those who are, this will probably be much more relatable.

Unfortunately, even for a hard-hearted non-appreciator of dogs like me, I have to tell you upfront that Elvis does not survive this book. Which adds to the tragedies that Auvinen has survived, and is devastating to her. So it’s not surprising that such a big portion of the book is about him, and what he meant to her, and perhaps that’s why I pulled so many of my favorite quotes and excerpts to remember because there really were a lot of them. But they still ended up feeling minor compared to how much of the book was about a dog.

But what’s amazing about the way she writes is that so much of her story has the potential to become maudlin but she finds the ways to tell it without making it obnoxiously sunny; rather really showing what experience has taught her. I always find this so helpful to read — how others have pulled meaning from these kind of gut-wrenching experiences that alter the landscape of your life.

She even finds a happy ending of sorts, observing poignantly, “Yet the world fills in the gaps it makes.” She met her husband shortly after Elvis died, and his simple but lovely artwork of flora and fauna punctuates the book (like the cover fox.)

It’s worth reading for some of the raw, emotional writing, and observations on nature but will be most appealing if you share the author’s dog affinity, otherwise something of the passion of it all might be lost on you.

I’d fought so hard, shoving myself against things, rolling rocks uphill—determination the metal that made me so damn tough. If there was one thing I knew, it was my own strength. But I was beginning to see there was strength in surrender too. Living on Overland Mountain taught me that. The alchemy of wild places is that they work on you the way wind works on rocks, the way twin trickles flowing in opposite directions on Milner Pass high in the Rockies become the Cache la Poudre and the Colorado.

6 thoughts on “Writing on Loss and Solitude From the Rockies”