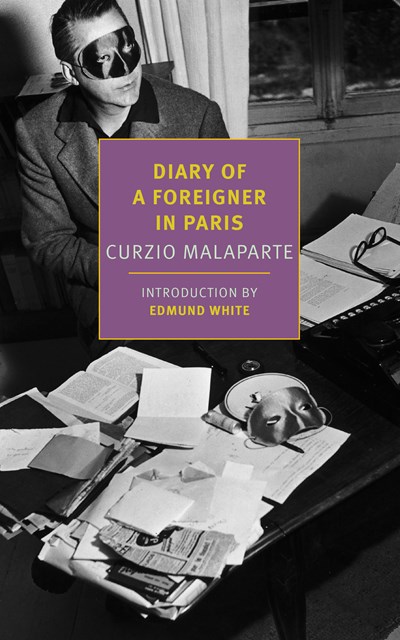 Diary of a Foreigner in Paris, by Curzio Malaparte (Amazon / Book Depository)

Italian war correspondent and author Curzio Malaparte is such an oddball figure. I really enjoyed his book Kaputt, about his experiences as a war correspondent in Eastern Europe during the Second World War, but I remember being unsure what was fiction and what was reality in it. He seemed to have almost too much of a knack for being in the right place at the right time and overhearing the right things, and some scenes were too outlandish.

He’s known for blurring those lines heavily, exaggerating and inventing to flesh out his stories, but at the same time he’s clearly observing actual events more often than not. Edmund White writes in the introduction to Diary of a Foreigner in Paris, translated anew from French and Italian for a New York Review of Books classics edition, that Malaparte was a compulsive liar — or at least a prevaricator for the sake of art, behavior that’s connected to a theory from another author that “Italians prefer beauty to truth”.

So knowing what to believe becomes quite the conundrum, especially when there are greater ethical issues at play. Malaparte is a particularly thorny example here because he was an admitted Fascist who may have switched sides when it became clear which outcome the Second World War was going to have. Or at least this influenced how one could read Kaputt. I found this book to be less questionable except for its sometimes tedious recounted dialogues.

This is his personal diary, sort of, because it seems he always intended it for publication, having said that he wanted it to be a “portrait of a moment in the history of the French nation, of French civilization, that coincides with a particular moment in my life, the story of my life.” As translator Stephen Twilley points out in his note, “the protagonist of virtually all his books is ‘Malaparte,’…a slightly embellished and heightened version of the empirical author in his experiences near the center of European politics and culture in the first half of the twentieth century.” So any notion of this being written personally is pretty much nonexistent.

Which is fine, after all his position in history is one of the things to really appreciate about Kaputt — that juxtaposition of the personal with greater events of contemporary European history, including (in)famous historical figures. But as with that book, there’s just always that nagging suspicion of truth, and how to read this if it’s unclear whether it’s fact or fiction and what his intentions are. A scene Malaparte relates where he supposedly got away with insulting Mussolini’s neckties to his face is a majorly suspicious example.

But that aside, he’s in Paris, his dream city, having finally returned after 15 years away. War is over, Europe is rebuilding, there are new possibilities for art and literature and society, and as always, Paris is a good place to be for all this.

Malaparte’s strength, to me, is in his observational skills. His writing always reminds me of the opening of Anna Akhmatova’s Requiem, when a fellow Leningrad resident waiting in line to deliver packages to imprisoned loved ones asks if she could describe this scene. Malaparte is a master at this kind of emotion-stirring observational description of the bleakest moments, but imbued with a savage twist of humor. Or just lovely-to-picture imagery, like when he describes a particularly hot day in Paris as leaving the city “wrapped in a shroud of heat that lifts the houses into midair, like in Chagall’s dream.”

He details here what it was like to return to Paris after the war. He writes about feeling more at home in France than anywhere else he’s traveled, and yet the simultaneous paradox of always feeling like an outsider there too. He muses on French attitudes and aftereffects of the war, and goes to parties and events with the literary high society of the day.

I expected to like this more, but it felt too raw and unpolished. Glimmers of his wit are there, but much of it was a slog. He also seemed to put on some intellectual airs to try and compete with the French writers and philosophers he admired, or sometimes felt snubbed by, as in one scene depicted here, or didn’t seem to think himself on a par with. Reading intellectual musings on literature and philosophy doesn’t grab me that strongly, or I wasn’t in the mood for it, at least. I just wanted his sharp or poignant observations around behavior and atmosphere. There’s a little of that here, but not enough.

I wouldn’t recommend  this to anyone who doesn’t have prior familiarity with him, and if you do you definitely need to be interested in something more analytical than a typical diary. It has its gorgeous lines characteristic of his writing, and evocative scenes, but also lacks some cohesion. It’s an interesting historical document, to be sure, as well as a study in truth and fiction, if you can separate them.

Diary of a Foreigner in Paris
by Curzio Malaparte
translated from the Italian and French by Stephen Twilley
published May 19, 2020 by New York Review Books

8 thoughts on “Curzio Malaparte in Paris”