Under the Sea Wind and The Sea Around Us, by Rachel Carson

The island lay in shadows only a little deeper than those that were swiftly stealing across the sound from the east. On its western shore the wet sand of the narrow beach caught the same reflection of palely gleaming sky that laid a bright path across the water from island beach to horizon. Both water and sand were the color of steel overlaid with the sheen of silver, so that it was hard to say where water ended and land began.

One highlight of quarantine reading lists was discovering that naturalist Rachel Carson, she of Silent Spring (one of, if not the first, adult nonfiction books I ever read!) had written a trilogy of books about the sea, which have become quiet classics of nature writing. Claire at Word by Word recommended them, and they sounded like gentle, peaceful reads perfect for distracting (somewhat) from the current atmosphere. 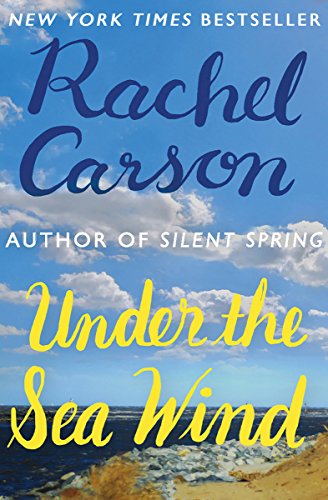 The first of this trilogy, Under the Sea Wind, originally published in 1941, was actually Carson’s first book. Carson said it was her favorite of her books, which always makes me read something with a different eye, knowing it means so much to the author themselves.

It’s written poetically, something that, when it’s done well and not overly melodramatic or overblown, makes for absolutely sublime nature writing. The book’s sections move physically and thematically through parts of the ocean itself, beginning with the sea’s edge at a stretch of North Carolina coastline seen through the life of a shore bird, moving to the life cycle of a mackerel in the open ocean, and ending with an anguilla eel who follows instinct to migrate from the river to the sea.

It took me a little while to get into the form and style, because although this is nonfiction and actually quite scientific in parts (although in the best of ways, imparting a wealth of information readably), Carson gives names and an identity of sorts to the animals she tells these stories through. I didn’t love this at first; it felt a bit silly, honestly. But it was something I got used to and when I did, it proved itself to be a remarkable tool for illustrating these life cycles, their interactions with a myriad of other creatures — varieties of fish, shrimp, birds, crustaceans, minute organisms, and the predators that await these tiny forms of life was they grow and venture further.

Above all, it feels like a gentle reminder that the world is so much bigger than we are, or what we think we are. Even looking at a vast, glassy sea surface hardly speaks to what’s underneath. These are tiny, easy-to-overlook creatures that Carson emphasizes, showing brilliantly their places in the ecosystem, and the immortal, unending flow of season into season as it happens from the water and its shores.

To be reminded of your place on earth, and the relative insignificance of it as you watch, as if through a camera, the goings-on of so many different forms of life following the impulses of their predetermined biology and realizing what great effect this all has on life in and out of the water is humbling.

Carson’s skill for weaving ideas and themes of biology and ecology into a gorgeously poetic narrative feels pretty unrivalled. Her writing gave me chills at times. And it was peaceful, and strangely reassuring. The universe is so vast, so much of the ocean still unexplored, and there’s so much flourishing life beyond our own worries and problems. We need reminded of that sometimes.

“…the blackness was displaced by a strange light of a vivid and unearthly blue that came stealing down from above. But only the straight, long rays of the sun when it passed the zenith had power to dispel the blackness, and the deep sea’s hour of dawn light was merged in its hour of twilight. Quickly the blue light faded away, and the eels lived again in the long night that was only less black than the abyss, where the night had no end.”

“No beating of tropical sun on the surface miles above can lessen the bleak iciness of those abyssal waters that varies little through summer or winter, through the years that melt into centuries, and the centuries into ages of geologic time. Along the floor of the ocean basins, the currents are a slow creep of frigid water, deliberate and inexorable as the flow of time itself.”

Ten years later in 1951, Carson published The Sea Around Us, which won the National Book Award in 1952. Although it shares the poetic tone and blends science and nature writing into a highly readable and accessible form, this book is much more scientifically focused and loses some of the narrative structure that made Sea Wind so unique. It’s not a detriment though; I liked this book just as much if for different reasons.

Eventually man, too, found his way back to the sea. Standing on its shores, he must have looked out upon it with wonder and curiosity, compounded with an unconscious recognition of his lineage. He could not physically re-enter the ocean as the seals and whales had done. But over the centuries, with all the skill and ingenuity and reasoning powers of his mind, he has sought to explore and investigate even its most remote parts, so that he might re-enter it mentally and imaginatively.

It explores how the oceans were formed, how life grew in and from them, how they’re changing in response to human interaction and the complicated, integral interplay of ecosystems. This all feels so crucial to understand, because our treatment of the oceans has only deteriorated since Carson wrote this. It’s easy, I think, to be removed and just see them as blue expanses on maps, or where you try to get to for vacation, instead of linchpins in Earth’s ecology with complex, ancient ways of sustaining and supporting all of the planet’s life.

Carson takes a much more serious approach to ecology and conservation here. It’s saddening to think it was 1951 when she was issuing dire warnings that weren’t heeded as they needed to be: “The mistakes that are made now are made for all time. It is a curious situation that the sea, from which life first arose, should now be threatened by the activities of one form of that life. But the sea, though changed in a sinister way, will continue to exist; the threat is rather to life itself.”

I found myself wishing that science textbooks I’d used were written more like this, because it would’ve made me much more interested in these topics than I ever was otherwise. But my enthusiasm did wane somewhat in its final portions, which focused heavily on the mechanics of the tides and lost me a bit. There are more technically written sections in this one, and I think it felt more pronounced since it’s elsewhere so readable. But her meditative descriptions and observations are so worthwhile. More than anything you can feel how much she cared about this, and wanted to motivate others to respond and care as well.

I could also tell, even with my limited knowledge on this subject, that some of it was slightly outdated, and Carson’s writing had a remove around processes that she wasn’t able to see herself up close, like what she’d witnessed and described in Sea Wind. Still, it’s kind of astonishing to consider what we were capable of witnessing, even 70 years ago.

In its broader meaning, that other concept of the ancients remains. For the sea lies all about us. The commerce of all lands must cross it. The very winds that move over the lands have been cradled on its broad expanse and seek ever to return to it. The continents themselves dissolve and pass to the sea, in grain after grain of eroded land. So the rains that rose from it return again in rivers. In its mysterious past it encompasses all the dim origins of life and receives in the end, after, it may be, many transmutations, the dead husks of that same life. For all at last return to the sea—to Oceanus, the ocean river, like the ever-flowing stream of time, the beginning and the end.

Since reading these two I’ve found myself so drawn to ocean-related nonfiction (maybe impending summer helped). What’s your favorite nonfiction about the sea?

14 thoughts on “Rachel Carson’s Nature Writing On the Sea”