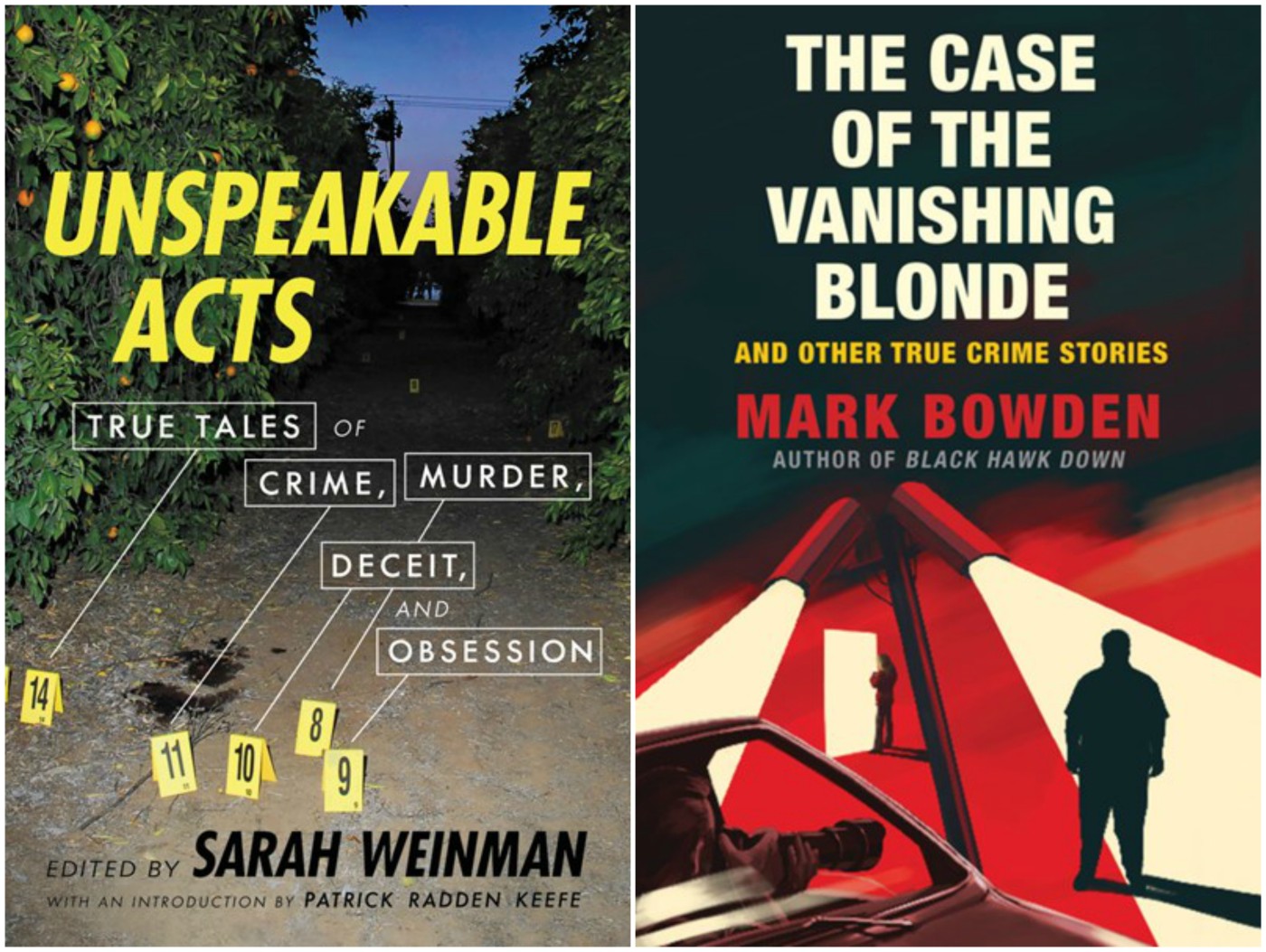 Two new books of long-form true crime nonfiction are out this month, and they’re both pretty good. Let’s get into it.

First up is gifted narrative nonfiction author Mark Bowden’s The Case of the Vanishing Blonde. My introduction to Bowden was through his true crime stories, and I kind of prefer him there to his full-length books. He just has such a way with storytelling in this form.

None of the six pieces anthologized here from throughout his career are new, but they’re interesting to read together because they’re all so different. They’re also intriguing in that way that Bowden has in his writing: It’s clear that he takes on stories that genuinely interest him thanks to strange twists or unusual elements in how they were solved.

I loved the two of these I’d read previously: “The Body in Room 348,” a perplexing mystery of a sudden death in a locked hotel room that was solved by PI Ken Brennan, the central figure in three of these pieces, and “A Case So Cold It Was Blue,” about the 1986 murder of Sherri Rasmussen and the arrest more than 20 years later of Stephanie Lazarus, an LAPD officer and Rasmussen’s husband’s ex-girlfriend. It’s a cold case that’s been covered endlessly across true crime programming since Lazarus’s arrest, but Bowden’s was my introduction to it and remains the best piece of journalism telling this story, in my opinion.

All the bad things said about [crime stories] are true–they exploit tragedy, they are voyeuristic, they generally lack any broader social import–but they are unfailingly fascinating.

In a brief introduction, Bowden lays out his feelings around crime stories clearly — that his editors, beginning when he worked at the Philadelphia Inquirer, loved these stories for the age-old “if it bleeds, it leads” reasoning. And that’s certainly true for many lurid headline-grabbers, but I disagree on its applicability to plenty of stories too, especially nowadays and for the most part for the ones told here.

Not every piece has a wider-reaching social impact, but several do. “The Incident at Alpha Tau Omega,” which tells the story of the frat house gang rape of a Penn student in 1983, is haunting and has unfortunate echoes (the men were given laughably light sentences) in the present handling of campus sexual assault, like in the treatment of Chanel Miller and her rapist.

One surprising piece, “A Crime of Shadows,” describes an online undercover police detective’s sting operation to ensnare a child predator. Except Bowden shows that the trap and its results weren’t as black-and-white as the official narrative would have them seem, and neither is the accepted narrative around “the fear of online child predation,” which he says “has grown far out of proportion to the actual problem.” This was a fascinating and alarming story.

Unfortunately, Bowden doesn’t go deeper into why he’s so invested in telling true crime stories, which seems like a missed opportunity since he’s really so good at it. These are undeniably fascinating and hard to put down, but I would’ve loved to hear more about his work and choices. Nevertheless, this is an excellent collection and shows why he’s a master in the genre. The Case of the Vanishing Blonde: And Other True Crime Stories, published July 7, 2020 by Atlantic Monthly

The Real Lolita author Sarah Weinman edits this collection of recent narrative true crime. Despite the hideous cover (It really rubs me the wrong way, I’m not even sure why) these are mostly quite good. Weinman divides the pieces into sections: narrative features, “Where Crime Meets Culture,” and justice and society. And it ends up feeling like a well curated selection, with no repetitive themes and always deeper, more thoughtful implications, which I really believe is why true crime has captivated, not just as a recent trend as some think, but since always.

Although all previously published, most of these were new to me, but one of the most affecting pieces here I wrote a bit about before. That’s “The Reckoning,” journalist Pamela Colloff’s 2016 story about Claire Wilson, who survived the 1966 shooting at the University of Texas. I’d also read the BuzzFeed story about Gypsy Rose Blanchard, which is interesting enough.

Several of the pieces here were exceptionally strong. Jason Fagone’s “What Bullets Do to Bodies,” which follows Dr. Amy Goldberg, a trauma surgeon and department chair at Temple University Hospital in North Philadelphia, is haunting. Goldberg sees the absolute worst, and says “people have to confront the physical reality of gun violence without the polite filters.” It’s a story that stays with you, uncomfortably so.

Others look at dubious forensic science like blood spatter evidence, the lack of impetus in searching for missing trans people, a romance con artist, the story of missing children spotlighted in Soul Asylum’s “Runaway Train” music video, the bizarre story of two young girls who thought Slenderman, an internet character, had commanded them to kill, and an examination of Ted Bundy and the culture around him that manages to say something different and relevant despite how much has already been written to the point of exhaustion on him.

There are a few pieces that didn’t have quite the same impact as others, but overall it’s a solid collection that examines a range of moral, ethical, and social issues. Unspeakable Acts: True Tales of Crime, Murder, Deceit, and Obsession, published July 28, 2020 by Harper Collins

I received advance copies of both titles courtesy of their respective publishers for unbiased review.