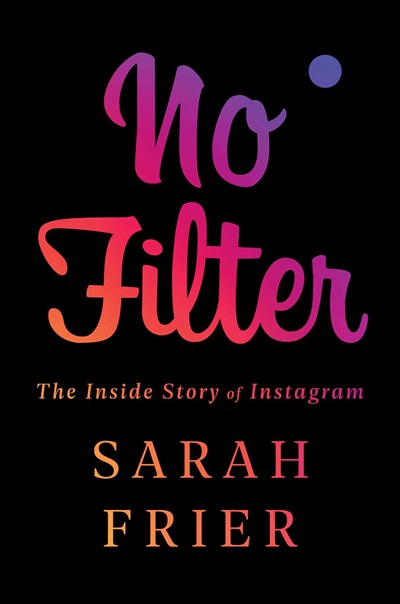 Book review: No Filter: The Inside Story of Instagram, by Sarah Frier

Of all the social medias, Instagram has always been a bit different. Before its acquisition and absorption into the Facebook behemoth, it started out artsier than the rest. Founder Kevin Systrom was in Italy with an expensive camera. His photography instructor confiscated the device, and gave him an old plastic one instead. Stanford graduate Systrom was enamored with the purposely glitchy-looking, square photos it took, and Instagram’s aesthetic was born.

Enlisting the help of friends and colleagues, including engineer co-founder Mike Krieger, Systrom developed an app called Burbn, a sort of rival to popular check-in app Foursquare, but with Systrom’s surprisingly tricky-to-achieve dream of adding photos.

Frier covers the overwhelming triumphs along with a number of issues that have plagued the app’s development over time, including that as it became more popular, users took greater risks to take more impressive photos, attempting to rise to the pressure of more followers upping their standard for content. As well as the monetization of using the app, the double-edged sword of drawing celebrities to the platform, and the trauma of filtering through dangerous or abusive content.

Then there’s the massive impact that it’s had, unparalleled by any other social media platform, on business and marketing. It’s changed the game completely. Somehow, naively, I never really grasped how ubiquitous Instagram has actually become, maybe because I still use it the same way I did when I first started using it, in around 2013-2014. That is, to take pictures of mostly outdoorsy scenes that I like and make the colors prettier. And I like to follow other people who do the same, especially in cities and countries that I enjoy looking at.

It turns out this is basically how Systrom originally envisioned people using it, once it evolved from the initial Burbn stage. The artistic aesthetic is what he strove to emphasize, and insisted on maintaining even after being swallowed by Facebook with its clunky, decidedly un-lovely layout and primary drive towards maximizing profit instead of highlighting art and creating inspiration. He wanted people to pay more attention to what’s around them and make art from it, even with then-crappy smartphone cameras. Just like he learned to do with his boxy plastic one in Florence. At the heart of it, that’s still what Instagram is to me, and I love it for that.

The thornier side is influencer culture, which is covered a lot here. It’s something I’ve mostly happily managed to avoid. But my god, what a weird business it is. Of course advertising has changed fundamentally with the rise of omnipresent social media, but the influencer side of this is so bizarre. And depressing, because meticulously curated feeds aren’t representative of real lives, although they do begin to seem that way. Not to mention the likes of the Kardashians, who are conjured throughout the book as examples of masterfully exploiting the app for personal enrichment. They post according to a schedule maintained by overlord Kris Jenner, and Kim Kardashian West earns $1 million per post. Barf.

At the same time, Frier tells stories of people whose lives were changed, brilliantly and beautifully, by Instagram. Users were selected by the app’s small, arts-focused core team, without even knowing why, to be featured on the Instagram main page or list of recommended accounts. Their follower count exploded and they quickly shucked their day jobs for full-time content creation. It’s an amazing modern-technology fairy tale, and it made me wonder how this will all look in the future — how it can be maintained with people’s need for new and constant content, and how Instagram will continue to evolve.

The villain of this saga is Mark Zuckerberg, whose MO is simple: whatever companies he acquires are intended to guide all users back to Facebook. He purchased Instagram for a then unprecedented magic number of $1 billion in 2012, and he’s got long-running feuds with any app developer whose company he can’t consume, including Jack Dorsey of Twitter and Evan Spiegel of Snapchat. The Snapchat drama here was perhaps most fascinating, because having never used it I didn’t realize that the mega-popular feature of Instagram Stories was actually directly copied from Snapchat. Facebook creepily has a way of monitoring what other apps its users are spending more time on, and analyzing this to find out what they should cannibalize or create. Hence we have Instagram Stories, which also served the interesting function of releasing some of the pressure on users to create beautiful, curated content. Stories became the go-to for less artsy, more down-to-earth, temporary content.

In a classic case of with great power coming great responsibility, Instagram was employed, along with Facebook, to spread misinformation in a targeted campaign against Hillary Clinton in the 2016 election. Due to Facebook’s loosely overseen ad-buying program, that platform was a considerably worse offender, but Instagram was affected too. It’s quite interesting to see how these unforeseen issues that accompany massive popularity are dealt with, and Frier lays out the drama and aftermath step by step.

It’s written in a style that reminded me very much of Bad Blood, so it’s very readable and well done. It does get a bit repetitive, as the main issues faced in these companies become predictable, seeming to arise in slightly different forms over and over in the small world of social media apps. But as a revealing glimpse behind the scenes into a product that so many people use, even depend on for livelihoods and wealth beyond imagination, it was fascinating and informative, with some cautionary lessons to keep in mind.

No Filter: The Inside Story of Instagram
by Sarah Frier
published April 14, 2020 by Simon & Schuster

28 thoughts on “Inside Instagram: A Social Media Fairy Tale with Silicon Valley Drama”