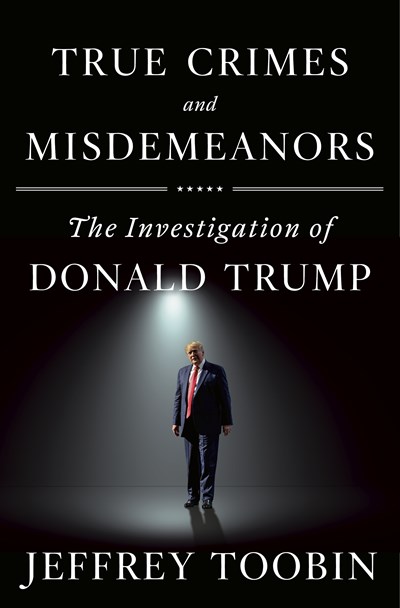 From the moment in an early chapter when lawyer, former federal prosecutor, and legal analyst Jeffrey Toobin refers to Donald Trump’s “hypnotizing swirl of orange hair” and notes that “Mueller had a head like an Easter Island moai and a demeanor to match,” I knew this long-anticipated book was going to be a treat.

Toobin is one of my favorite writers and commentators on subjects of white-collar and political crime. He has a clear, well-organized style and the amazing gift of breaking down complex legal and financial topics so that they’re comprehensible for the layperson. Delightfully, he has that hilarious ability of certain attorneys to infuse potentially dry legal writing with fair but funny commentary. (Like: “In addition to the self-evident lunacy of the comparison, Loudermilk was factually wrong.” This is why I never mind editing legal documents, they’re often more amusing than you might think.)

Nowhere in recent memory has this ability to explain and analyze legal processes felt as important as in connection to the crimes that have been committed by Trump and those around him. True Crimes and Misdemeanors closely examines the legal snafus that have characterized Trump’s tenure, beginning with his firing of James Comey and the Mueller investigation, through to Trump’s impeachment for asking the Ukrainian president Volodymyr Zelensky to investigate a political adversary.

For many liberals, Robert Mueller (I’m sorry – Robert Swan Mueller III, as I learned here) was a figure onto which we projected our hopes and dreams of removing a treasonous autocrat from the White House. Mueller was so reticent and quiet during the years of his investigation that both Democrats and Republicans could effectively project their ideas and desires onto him without anyone really being the wiser. According to Republicans he was biased and on a witch hunt; to Democrats, he was a justice-wielding savior.

In reality, he was doing the task he’d set himself to do from the beginning, nothing more and nothing less. We meet the team of attorneys he assembled to assist him and get insight into his decision-making. While demonstrating clear respect for Mueller’s background, experience, and methods, Toobin also shows why the Mueller report didn’t itself lead to impeachment, and criticizes some of Mueller’s moves as he shows how they were gleefully exploited by Trump and his goons.

A big one was his decision not to interview Trump in person: “Mueller had every reason to pursue what certainly would have been the single most important piece of evidence in this investigation.

Significant page space is devoted to Rudy Giuliani’s role in swaying the investigation, and his blundering into derailing it. He started the talk about pardons, which was the beginning of the end. “Giuliani might have sometimes looked silly on television, but he delivered real accomplishments for his client: he set loose the president to turn the Republican base against Mueller; he used pardon talk to shut down the pipeline of cooperators; he cleaned up the facts of the Stormy Daniels situation so the president was not continuing to defend a false version of what transpired.”

Of course, later Giuliani would be responsible for architecting (to use a dumb Ivanka Trump verb) the Ukrainian mafia-style matter that led to impeachment, which causes Toobin to say of his work that it “must rank among the most disastrous pieces of advocacy in the history of American lawyering.” That’s more like it.

Then there are the Three Amigos — former Secretary of Energy Rick Perry, former Ambassador to the EU Gordon Sondland, and special representative for Ukraine negotiations Kurt Volker. That’s their name for themselves; I pictured this ghoulish gang as more like Oogie Boogie’s henchmen. They’re so outrageously incompetent it’s a wonder they “achieved” anything at all, but the way Toobin describes these three comes across rather comedic without intending it to be. I mean, it would be funny if they weren’t undermining American democracy and viciously exploiting a country desperately struggling to right itself amidst volleys of corruption, war, and with Russian soldiers on its eastern border.

Toobin lays out the genesis of the Ukraine quid pro quo issue as it first takes root, and, no surprise, for one of the pettiest public figures we know, Trump’s distrust and dislike of pro-Western forces in Ukraine stemmed from a grudge.

Speaking of quid pro quo, I found it odd that Toobin says “Democrats had mostly stopped using the phrase ‘quid pro quo.’ (This was wise because most of their constituents spoke English rather than Latin.)” Really? I hadn’t noticed that its usage abated, but if it did, I can’t believe it’s because Democrats thought we’re too dumb to understand what it is (I know Trump didn’t understand what it meant, but I’m talking about the rest of us now). I mean: quid pro quo, Clarice. Of course we know what it means!

Along the way of examining bigger legal predicaments and the crimes that led to those in Trump’s orbit who pled guilty, like Michael Flynn, Roger Stone (who doesn’t use the correct form of your/you’re: unforgivable), Michael Cohen, and Paul Manafort, Toobin portrays the circus-like atmosphere of Trump’s reactions when he’s called out for all the bullshit he and his minions get up to. Trump writes like a middle school girl. He said Jeff Sessions should give a speech that included the lines, “I know for a fact b/c I was there. He didn’t do anything wrong except he ran the greatest campaign in American history.”

Describing the week of May 2017 in relation to Trump occurrences, Toobin references the John le Carré line, “There are moments that are made up of too much stuff to be lived at the time they occur.” So I felt reading this book and absorbing all of this. I don’t mean that negatively whatsoever. Every day feels immeasurably longer under this administration. Even if you’ve followed news closely, which I thought I had, I’d missed some things. Like that Lt. Col. Alexander Vindman’s twin, Eugene, was fired by Trump from his White House posting the same day his brother was (for testifying in the impeachment). Toobin rightly calls this horrifying development (brother Vindman wasn’t involved) “a particularly sinister (and North Korean) touch.” It’s hard to read these things, especially with Vindman’s speech reprinted here in full, reassuring his father who emigrated from the Soviet Union that he’ll be ok for telling the truth — this is America. And Trump’s getting away with it.

Even if you know most of what’s covered here already, as I would think anyone who’s so inclined to pick this book up does, Toobin’s commentary and analysis are priceless. He says it’s true that Trump is, as many have wondered, a narcissist, but it’s more than that:

This is described as a “real-life legal thriller” and that’s no publisher’s exaggeration. Even though most of this narrative is known, Toobin even manages to end many chapters on cliffhangers. A thorough, impressive and readable analysis, with a warning of what’s to come if he’s allowed another four years.

True Crimes and Misdemeanors:
The Investigation of Donald Trump
by Jeffrey Toobin
published August 4, 2020 by Doubleday

30 thoughts on “Investigating Donald Trump, and Why It’s Failed”