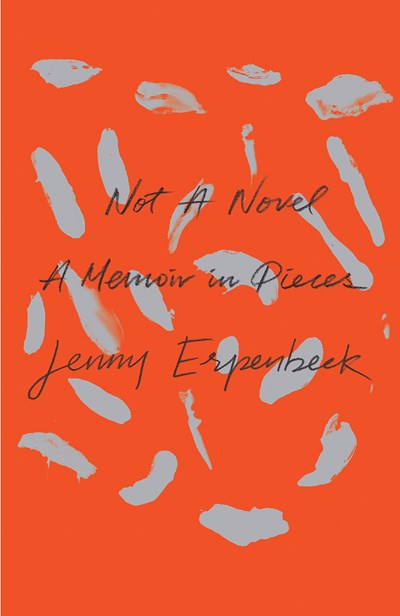 Book review: Not a Novel, by Jenny Erpenbeck, translated by Kurt Beals

If the language that you can speak isn’t enough, that’s a very good reason to start writing. As paradoxical as it may be: The impossibility of expressing what happens to us in words is what pushes us towards writing. Whenever I haven‘t been able to understand something, haven’t been able to capture it in words, that’s when I’ve started writing.

Jenny Erpenbeck, a novelist who’s popular enough in translation and massively so in her native German, writes eloquently and with quiet passion in her newly translated collection of personal essays and speeches, Not a Novel. The first section, “Life,” contains memoir-based essays, recollections of her childhood in East Berlin and ideas around change, memory, the passage of time, and the surreal melding of disparate worlds.

I absolutely relished the essays in this section; they’re written almost achingly beautifully, especially when she writes about her mother’s death and the apartment and things she left behind. She portrays this foreign world, and how it felt to a resident when it was suddenly relegated to the past, so vividly. Erpenbeck writes that in collecting these texts, that she’s “looking back for the first time at many years of my life, at the thoughts that filled my life from day to day during that time.”

One image from “At the Ends of the Earth,” of the glowing clock she could see across the wall on what must be the facade of the Berliner Zeitung newspaper building was haunting: “Throughout my entire time in school, I read the time for my socialist life from this clock in the other world.”

Or her description of the infamous “ghost” subway stations in Berlin:

The wind blew old paper and dry leaves to the bottom of the steps, where no one entered for thirty years; as children in the East, we could sometimes hear the sounds of the West Berlin subways through the ventilation grates as they passed beneath the East without stopping, we knew the warm air that drifted up to us from those inaccessible air shafts, but we learned that just as the municipal dairies and coal shops could disappear forever, there were also paths beneath our feet that were not meant for us, airplanes overhead in which we would never fly, we heard the construction workers on the scaffolding in West Berlin hammering and drilling, and we knew that an entire world that seemed so close could remain inaccessible nonetheless.

“Literature and Music” explores her literary influences. Fairy tales, quintessential German storytelling, get their due, as do novelists Hermann Hesse and Thomas Mann and poet Edgar Lee Masters. She also teases her themes in examining some of her own novels and plays. I love when an author does this — analyzes themselves and where they were coming from. I remember sometimes thinking in literature courses that some analysis felt to me like the TS Eliot poem — “That is not what I meant at all; That is not it, at all.” I so love these kind of insights straight from the source.

Still, this section was the least compelling for me, being mostly unfamiliar with her fiction and more inclined towards personal essays and political topics. But her thoughts around writing are marvelous to read:

I think we want to write because we find it hard to make ourselves understood.
Because we find that things fall by the wayside when we speak.
In fact, as strange as it sounds, the most important reason that we write is probably that we are at a loss for words.

The lectures and speeches of the third section, the almost deceptively simply named “Society,” address her activism particularly on behalf of refugees. Erpenbeck seems to have gotten involved in this work and awareness during the height of Europe’s Middle Eastern refugee crisis in 2014-2015. She writes poignantly and sensitively about what was quite a fiery moment in Europe, set against her experiences in a divided Germany.

Erpenbeck compares the backlash against refugees in Europe, as well as the US’s current general stance towards immigrants, to the euphoria of the wall falling in Berlin, asking “Why is it that the opening of the border in 1989 was something wonderful, but today voices cry out for new and stronger borders?” Indeed a conundrum.

She also attacks the racist, insensitive notion of “shithole” countries, noting that “This distinction between life that is worth something and life that is worth nothing is a distinction that was made under Hitler, too,” referencing this in light of a conversation she had with a Princeton professor who happily confessed that she urged Angela Merkel’s advisor to accept Syrian refugees as they were better educated than others.

Her words about the current state of politics in the US are more scathing:

This country, for example, which was a place of refuge for the poor and the lost of Europe, still suffers today from the massive violence that was inflicted upon the indigenous Americans and upon the “slaves” imported from Africa. This country wants to show the whole world the happy ending of history, and yet it fails to arrive at an understanding even within its own borders, as we’ve seen day after day for 150 years.

Some favorite quotes, which I think can convince better than anything I can say (I know this is quote-heavy, but even in translation her writing is effortlessly gorgeous):

“I myself lived right in the center of a construction site that could only be there because nothing, or almost nothing, remained from before — without even understanding what I was experiencing. And that’s probably always the case: It takes us a whole lifetime to unravel the mysteries of our own lives. Layer upon layer of knowledge accumulates upon the past, revealing it anew each time as a past that we certainly lived through, but couldn’t even begin to understand.”

“But everything that can’t be seen there anymore lives in my head now instead, more vivid than ever. Only for awhile, of course, since memories are engraved in mortal flesh, so as I grow older, those memories too will grow blurred and confused, until ultimately they are wiped out along with me, once and for all, so that there, on the same spot where I walked around in this world with my memories of everything imaginable, someone else can walk around and remember other things.”

Not a Novel: A Memoir in Pieces
by Jenny Erpenbeck
translated from the German by Kurt Beals
published September 1, 2020 by New Directions

8 thoughts on “Jenny Erpenbeck on Life, Literature, and Activism”