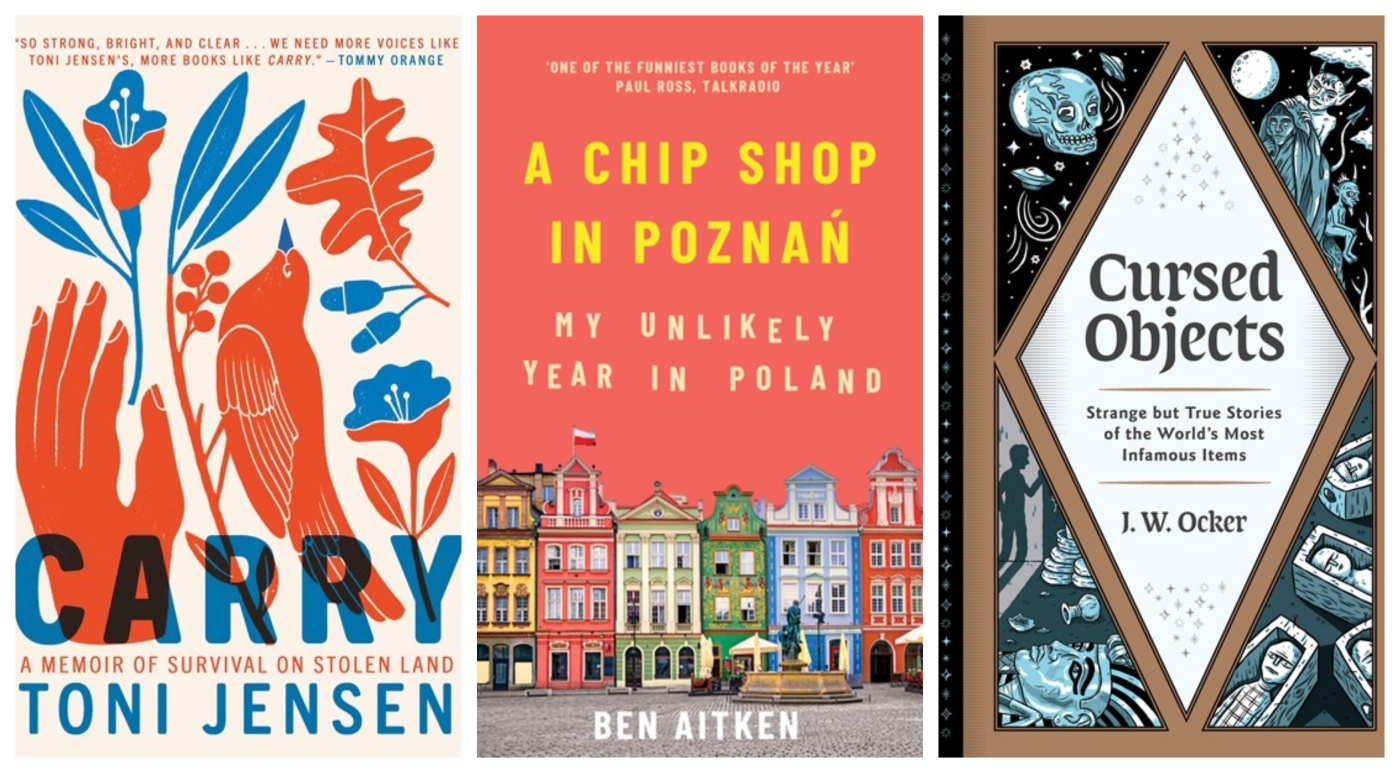 What the title says! I’ve been trying to think of themes or ways to combine reviews because I have such a backlog and I finally just gave up. These have nothing in common except they’re being released this week or next. Let’s talk about them!

Métis writer and professor Toni Jensen opens her memoir, Carry, with a scene that will resonate with every woman. A chance encounter in nature with two men that suddenly turns from ordinary to harrowing. She describes a man gesturing her out of her car with a handgun with a smile, while “say[ing] things that are incongruous with his smiling face.”

Not that we’ve all had a gun pulled on us, but that dissonance between what a man says and the look on his face. It gave me chills.

I had chills often reading this, actually. Jensen confronts stereotypes, particularly of Native Americans, and interprets them in relation to herself and her family. It addresses her relationships, the birth of her daughter, and working at universities as a Métis woman. The thread running through it all are haunting encounters with gun violence.

There’s a tone of melancholy that runs throughout and it suited the material so well. Jensen manages to sound both profoundly strong and yet weary, not because she’s been hit with so much but because look at the state of this fucking country (those are my words and impression, I don’t want to put that all on her).

The portions around gun violence read the strongest. This is a harrowing subject any way you take it, but Jensen has had connections to more than her fair share of shootings and the threat of them, including what seems like an ever-present threat for college professors in their courses, or the fear when it happens to colleagues. It’s stomach-turning. This is no way to live, or to die.

Because all roads used to lead back to that house, and it is a measure of time and hard work that they no longer do.

A story told in bits and pieces is around her dysfunctional childhood home and abusive father. He later falls ill with Lewy body dementia, and she considers her complicated feelings for him, how she has more affection for her dogs. “This is what it would be like, day-to-day now, with my father if my heart were a different heart. If we loved each other differently. Each day I would watch him cross and hold my breath and hold my heart steady and I would walk around to meet him.”

This, in my opinion, is memoir at its absolute best, when a writer is forced to examine something in themselves that’s so uncomfortable to think or say but they have to say anyway. This has moments of brilliance but overall I found it disjointed and at times repetitive. I noticed a few points where facts or details were repeated, which made it seem less like a cohesive memoir and more like interconnected essays. It also didn’t establish much about who Jensen is, it just jumps right in and we get something of a portrait in fragments.

But it’s haunting, has a powerful voice and a lot to show and say about violence against women in many forms, and gives ample food for thought. It also teaches — in one of my favorite anecdotes — the importance of bringing the proper sized bag of snakes.

In 2016, as his native Britain prepared to vote on a referendum to leave the European Union, travel writer Ben Aitken moved to Poland, source of many of the UK’s immigrants. He wanted to experience living in a place that often gets a negative rap in Britain, and is notorious for low pay and difficult working conditions.

And he wants to understand, most of all, the culture of this historically beleaguered country. I couldn’t have been more on board with that, because Poland is a place that never gets the attention it deserves, in my humble opinion. It only gets press for the bad stuff, and granted, lately, with the election of a far right-wing government and rollback of LGBTQ rights, that’s been very, very bad. I don’t even know what to say about how disappointing I find that, and how badly I think it bodes for the country’s and citizens’ futures.

But the fact remains that it’s a vibrant, culturally rich place with so much to see and do and a lot of friendly, curious people who are known for being warm and welcoming when you’re on their turf. It just doesn’t often get its dues as a destination or credit for its attractions. It’s not much written about either, as Aitken himself notes, with basically just one other outdated travelogue as precedent.

So without speaking the (extremely difficult) language or knowing anyone, he moves to Poznan, a city but not one of the major, more cosmopolitan ones, and takes a job in a chip shop, plus teaching English and a few other small endeavors. He lives there for a year, and spends a lot of time drinking, partying, flirting, traveling to Polish destinations, and talking with locals while attempting the language.

It was at times very funny and served his purpose of showing a different side of a country that’s always in the news for the worst reasons. Economically, he also demonstrates how difficult it is to survive on standard wages, underscoring the decision of many to seek work elsewhere in the EU or UK. Brexit happens while he’s there, marking a deep schism in relations and hovering like a black cloud over his temporary expat life and what this says about national identity and international connections.

Where it didn’t work was one of the same points where it did — the humor was a drawback when it didn’t land. It’s also a bit long, especially when so much of the action is taken up with drinking and hangovers (to be fair, alcohol is cheap there and such an ingrained part of social life that I understand its role here, but it’s not always entertaining to read about).

And ultimately, it’s just a bit light and aimless. But the point was to show a charming side of the country apart from its troubled politics, and he does. It also sends a message that unity is what’s most important — we’re more connected than national borders indicate, and it’s to everyone’s benefit to experience other cultures firsthand, rather than blindly judging those who leave with no context.

Ocker, author of several previous books on topics grim and gruesome and host of the podcast “Odd Things I’ve Seen” writes this compendium of cursed objects. It’s a unique subject, he explains, because actually, there aren’t all that many (in)famous cursed objects, especially considering the world’s plethora of hauntings.

Ocker writes for the skeptics (of which he’s clearly one, interestingly enough) that “another, less paranormal definition of a cursed object is an object that gathers stories to itself — and more specifically, tragedies.” So it’s not all magic, more tragic realism, and I liked that approach. Objects do hold a lot of power and symbolism, and it only seems a natural extension that this could sometimes get very dark.

In sections of museum objects, graveyard items, stuff from the attic, strange stones, cursed objects for sale, and a section that rightly asks “Why Aren’t These Objects Cursed?” he covers mummies (one busy mummy had a hand in sinking the Titanic AND starting World War I!), Ötzi the Iceman (I had no idea he was considered cursed, with a hiker eerily dying near where he’d found Ötzi — “almost as if the mountain needed a replacement,” Ocker writes), Dybbuk boxes, dolls, chairs, paintings, jewelery, and all manner of creepy cemetery stuff.

These make for very good stories, and he pokes holes in the fantastic where he can, but it can be uneven. It faltered in those that seemed like there must be more logical explanations but the narrative here didn’t bear it out.

My favorite by far was the Hope Diamond, maybe because it’s the only object I had a connection to, having been dazzled by it as a kid at the Smithsonian in Washington. It had an even weirder history than I knew — did you know that one of its owners, Evalyn Walsh McLean, temporarily pawned it to raise money for the kidnapping ransom of Charles Lindbergh’s baby?

In the final section, “The Curse in the Machine,” he includes some oddities like the story of “Gloomy Sunday” — “the Hungarian Suicide Song,” cursed phone numbers and video games, and the origin story of chain emails. I learned a surprising amount from this book.

The biggest highlight was the unexpected humor. Some of these were told hilariously, making for fun reading, and making me think his podcast must be worth checking out.

Any of these pique your interest?

I received advance copies of these titles for unbiased review from their publishers.