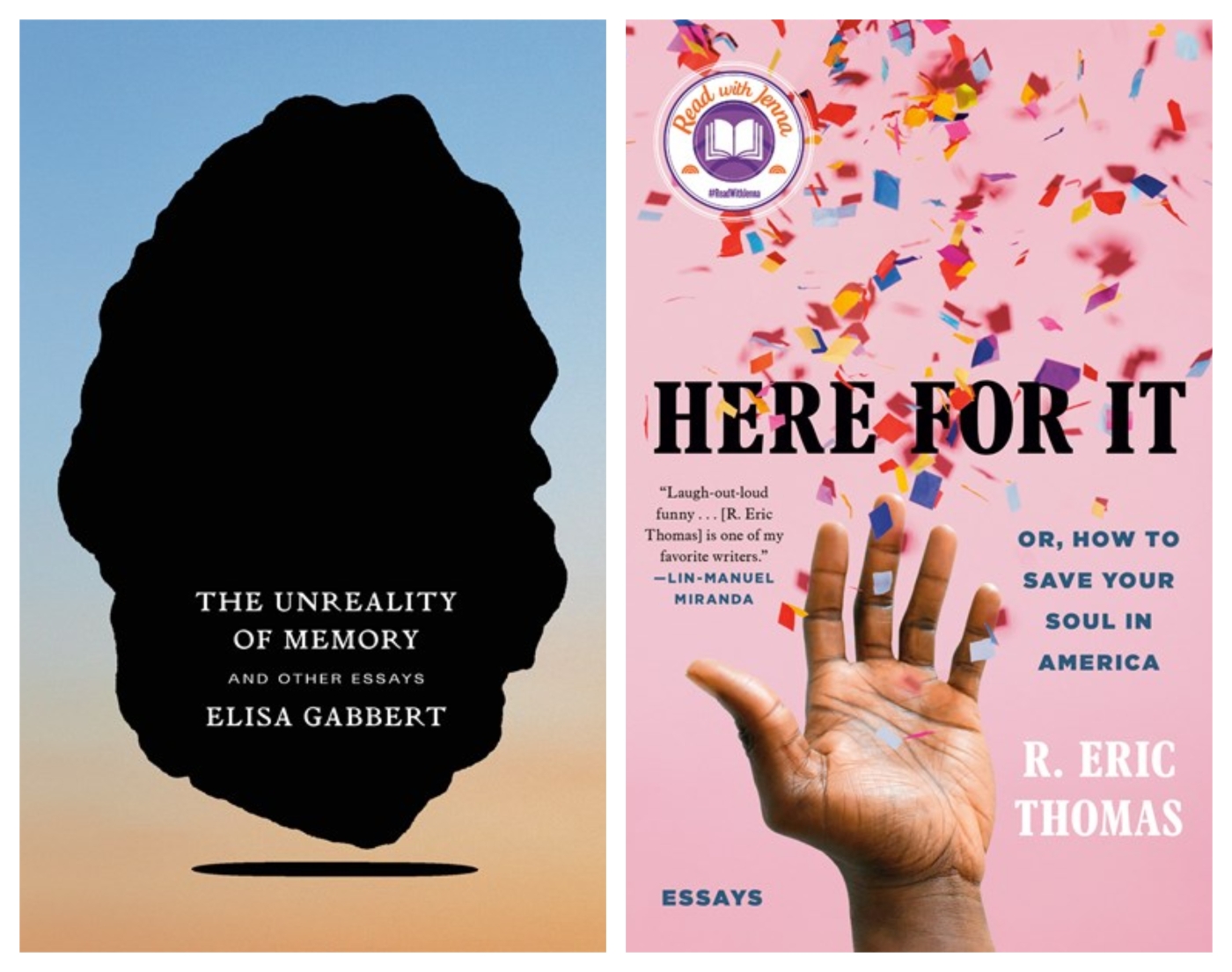 Essay collections can be wildly mixed bags: there are usually some that sing and others that are duds. I’ve already had one life-changingly glorious essay collection this year, one that made me not hate pandemic writing, so what were the odds of two more outstanding ones in the trash dump that is this year? Yet here we are; the bright spot of 2020 is clearly essays.

Poet Elisa Gabbert’s The Unreality of Memory opens with “Magnificent Desolation,” about how she became fixated on manmade disasters — first Titanic, then Chernobyl and 9/11. This is had-me-at-hello material.

The essays in this section all address disaster in some way, both personal and larger-scale. She examines topics like hysteria, through the Salem Witch Trials, apocalypse, global warming and, eerily presciently, the looming threat of contagion and pandemics in “The Great Mortality”. As I’ve mentioned, other sources have been predicting our current state in no shortage of detail.

Gabbert analyzes our relationship to disasters, and why we’re drawn to consuming information about them, so exquisitely. Her voice and methods spoke to me. I loved everything about her tone, the writing, and the socio-psychological points she made. It’s almost hard to put into words what was so special about her treatment of these subjects, but similarly I felt my thoughts aligned with hers so often, yet I would’ve struggled to put these same ideas into words.

These topics aren’t always easy to read, but Gabbert almost makes it so because her explanations make such sense, and speak to something universal in our behavior and understanding. And they slot ideally into the present moment, like when she describes the “resort to magical thinking” that happens “when we don’t understand the cause of a disease or how to treat it.” Her own understanding of epidemiology and how it’s really the “microbes and the insects that run things, ” remind[ing] us who’s in charge…by transmitting disease, often with the help of small animals, including rodents and bats” came from a book for young readers. Her analysis often begins like this, on a very basic level, and she builds it into an emotional crescendo with intelligent but never condescending prose.

The other two sections contain essays on memory, perception, and social conditioning woven through with notes from Gabbert’s extensive reading and thoughtful parsing of her experiences. I feel like it’s worth mentioning that essays like these can quickly feel pretentious, over-analyzed, or just kind of exhausting, especially if the author brings too heavy of a poetic touch. These were pitch-perfect though, that kind of writing that seems to have peeked into a little corner of your own brain.

“Don’t journalists always have an agenda, and isn’t their loyalty to the agenda first? Shouldn’t we treat them like vampires — never invite them inside?” On the Janet Malcolm/Joe McGinniss/Jeffrey MacDonald controversy. (This case and its journalistic treatment is having something of a resurgent cultural moment right now; I’ll get to it later this week.)

“My theory is that when we’re young, we prefer the second kind of happiness; we take a lot of risks because the lows improve the highs. As we get older, as the pressures of conformity increase and the lows take their toll, we strive for the first kind of happiness. But we continue to prefer our painful memories — stable life may be happier, but unstable life is more interesting. It’s as though being happy on a day-to-day basis doesn’t make us happy overall.”

“Loneliness and longing and nostalgia do feel sometimes like varieties of happiness, like something to indulge in, like when I read old emails on purpose to make myself miss someone.”

“If this world was strange and magical to me then, it’s even more strange and magical now, for being remote. it’s hard for me to believe it no longer exists; it’s not a place I can go to. I can see it in such lush and minute detail.” This was from a piece describing her grandmother’s house, and the fallibility of memory, among other aching but beautifully ideas.

This book was wonderful; it made me think, it disturbed and somehow soothed, and made me more curious about why certain things or even feelings hold the strange fascination they do.

The Unreality of Memory: And Other Essays, by Elisa Gabbert, published August 11, 2020 by Farrar, Straus and Giroux (I hate the cover and double-hate when a book I love has a meh cover! UK edition is better.)

R. Eric Thomas is a writer for Elle.com, namely a humor column called “Eric Reads the News,” but I didn’t know him from that. I would never think to read elle.com, but apparently he’s quite the internet sensation. It’s easy to see why — he’s quippy, irreverent, sensitive, and his experiences resonate more than I imagined possible.

Thomas details his childhood as a Black, gay man and how that’s affected the way he moves through the world, including his experience at Columbia University, living in New York, and in connection to his relationship to the church and his marriage to a pastor, among myriad other subjects, shot through with the gamut of emotions from joy and wonder to deep sadness and regret.

It’s easy, I guess, to look back now and say that everything turned out okay and Jay has moved on and I’m married and we all lived happily ever after, as if none of the sadness left a mark, as if winter never came, as if now is all that matters. But that place in me that compulsively cried to everyone who would listen is still in me; the bad times don’t go away just because times are good.

It truly is laugh-out-loud funny, and constantly takes unexpected but welcome turns. Some anecdotes have melancholy or even gravely serious undertones, like one recalling a high school friendship during one of those pivotal figuring-yourself-out phases, when another person indelibly influences that process and becomes marked in memory forever.

When I was a strange, uncomfortable boy, I met a melancholy, cerebral girl. And none of that exists anymore. But for me it’s not locked away in the past. It’s unresolved, as if there is still a glimmer of possibility somehow. It’s Christmas lights strung across a barn ceiling in anticipation of a magical night, or the release of an album that will change Madonna’s life and ours; it’s dusty books waiting to be put back in order.

His experiences with sexuality and racism are both illuminating and heartbreaking. This is how he considers his own name and what it’s given him: “Robert Eric Thomas is an intentionally racially neutral name, as my parents didn’t want others to be able to see my name on a job application or resume and discriminate against me. It was a beautiful and sort of heartbreaking gift. And, as far as I can tell, it has helped me in my life. I’ve had a lot of job interviews with racists.”

In addition to seeing the world through Thomas’s eyes; that is, the brilliance and ebullient discovery of it even while learning the harsh realities of your own place in it, he also peppers his storytelling with those kind of cliched chatting with a friend about your mutual grievances/agreeables moments. He writes about how he’s “obsessed with how bad the past must have smelled,” and, having spent an inordinate amount of time thinking about that myself, I just wish I could be friends with him.

And I was right there with him on how living in the country seems so much more menacingly scary than the city: “Are there bears in the city? No, there are not. […] Are there Babadooks and Mothmen in the city? Honey, the rent is too high for all that.” I died! “And you know what lives in the woods? Horrors limited only by your own imagination (and, I guess, your knowledge of woods and the creatures therein).” EXACTLY.

He had an awkward start in relationships (join the club) and there was something reassuring in how he told these stories, because some of this stuff is traumatic — at least on the milder end of the trauma scale, and the way he infuses it with humor, and just the honesty of telling it in the first place, was wonderful. More than anything, I felt grateful that he’d put all of this into words and shared it.

Because it was my first long-term relationship, I didn’t know what a reasonable expectation for two people trying to make a life together was. That’s the thing that romcoms never teach you and short stories about rich white couples who live lives of quiet desperation are too far gone to cover: What is the act of making it? What’s a red flag and what’s just a weird personal detail that you can spin into a charming anecdote? The line is thinner than you think.

This came out just pre-Covid, but even in its lighthearted stories, there are eerie echoes of what’s to come. Although I guess there was so much warning that finding these prophetic moments isn’t hard, and he is a political/current events columnist who’s constantly observing minute political and cultural shifts. Still: “We are not going to band together and listen to a bunch of scientists to save humanity like Jake Gyllenhaal in a disaster movie. Sorry. You know how I know? Because a bunch of scientists are telling us how to save the world right now, and half the world isn’t listening to them.” And that was before the current disaster. Sigh.

It’s heavily pop culture-referenced, with frequent Whitney Houston cameos and 90s pop-cultural touchpoints enhancing his stories. I suppose if these are unfamiliar something fundamental might be missed here, but I thought they worked perfectly. The current ones are delightful too:

There’s always a huge, complicated system for subjugating people in dystopias. There’s always an oppressive hierarchy. And the people at the top, well — the bureaucracy is astounding. Do you ever think about that? Who is pushing paper in the Capitol? Who is the Housing and Urban Development secretary in Gilead?

Here for It is a bit of everything — current events commentary; touching and hilarious glimpse into Thomas’s life and lessons learned; utterly delightful.

Here For It: Or, How to Save Your Soul in America; Essays, by R. Eric Thomas. February 18, 2020 by Ballantine Books

12 thoughts on “Exceptional Essays: The Unreality of Memory; Here For it”