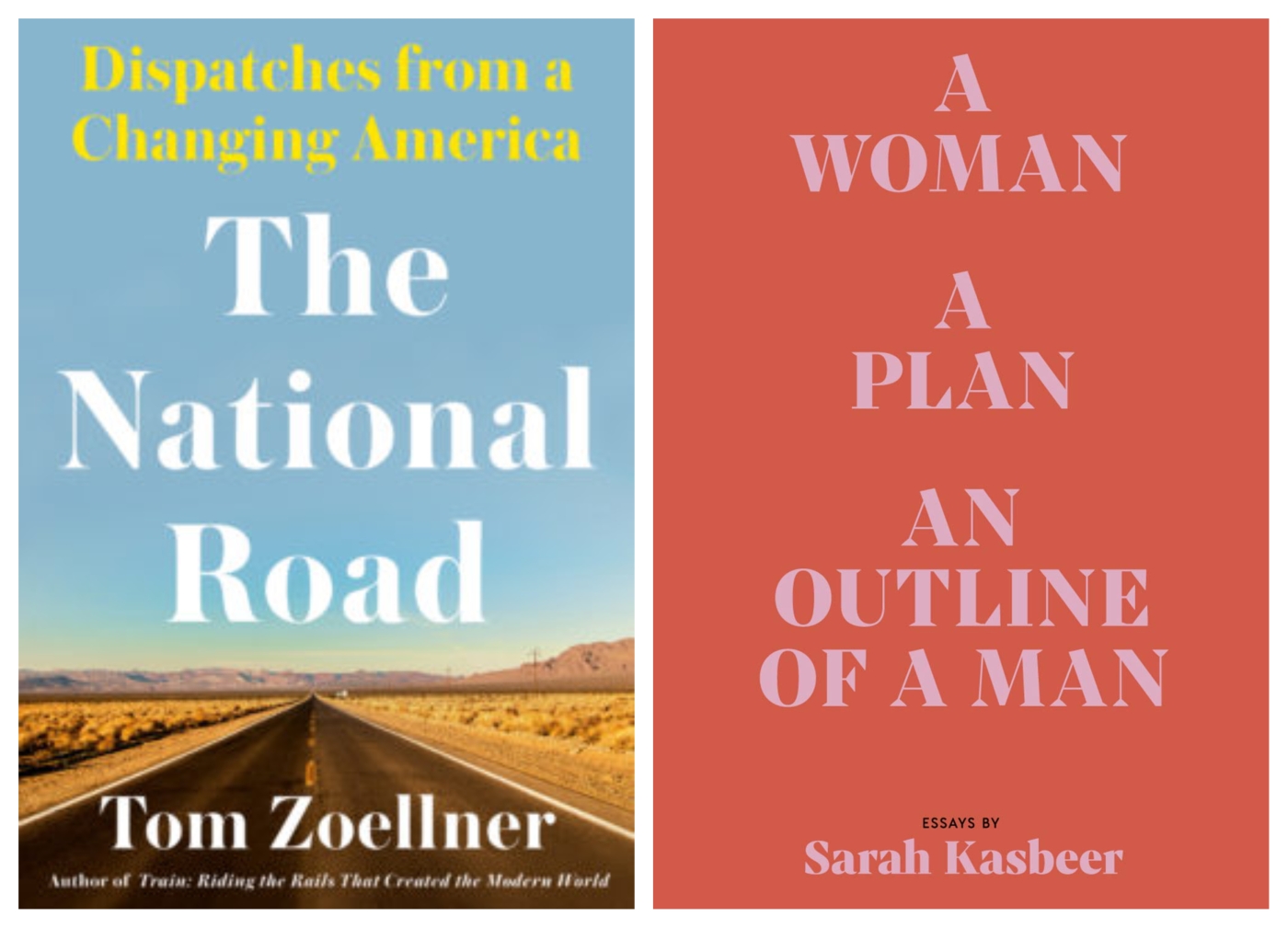 Two new essay collections out this month, both with weird, different looks at aspects of Americana.

First, Tom Zoellner’s The National Road: Dispatches From a Changing America, which “attempts to paint a picture of ‘American place’ in this uncertain era of political toxin and economic rearrangement. These are observations collected from thirty years of traveling through the United States and topics of more recent reporting. I had hopes that the “whereness” of America might be perceived through its territorial shards and fragments.”

This is endlessly fascinating, but my enjoyment was uneven. I liked some a lot, and sometimes his writing blew me away, but it also had an almost academic, lofty tone and I ended up skimming.

Zoellner doesn’t actually focus on the politics of the current moment, which is a relief or a disappointment depending on your preference. Rather he looks at many topics that tie into the current political climate — poverty, race, sex and morality, America’s unique brand of national pride and patriotism among them — and weaves these into tightly specific locations, exploring what place and “home” can mean for people and politics.

We all carry maps of our country — however big or small — around in our minds, a web of association and memory, and understand ourselves through their reading. It is a physical kind of patriotism.

One passage in “Your Land,” which points out that “home as a physical place is a shifting concept” was especially resonant, naming objects or landmarks that hold special significance to him, although they may not appear so strikingly meaningful. I loved this because having moved around often in my adult life, I’ve found how almost magically powerful these kind of associations can be, and how strange it can seem that they’re not at all meaningful to anyone else. I loved sitting with this idea for awhile, and his vivid descriptions, and considering what it meant.

This of course leads to the idea of the value of “retracing” our pasts, another recurring theme here, and one especially poignant as these essays span so much time: “Life feeds best on new experiences and does not benefit from endless retracing, but I sometimes cannot escape the draw.” Can any of us?

The essay “The National Road” is about Dollar General stores, and how they’re changing the suburban landscape, for better or for worse (worse, almost universally for worse). The nutrition of the food sold there is abysmal, and they almost inevitably spring up in areas that desperately need wider, cheaper access to nutritional food. He quotes, “The Dollar General method is the curious inverse of the Ray Kroc method, seeking not growth but decline,” highlighting Dollar General’s proliferation in economically declining or stagnating rural areas.

So the new national road is paved with dollar stores, cutting across the country through areas where the population most needs to stretch their (often fixed) incomes and has the fewest options for doing so. This was a depressing but illuminating story that speaks volumes about our current political mindset in regions where decline is rampant and possibilities bleak, and this was pre-Covid.

One powerful piece, “At the End There Will Be Strangers”, is about the demolition of his grandmother’s house, making way for a mansion, and ideas around memory’s fragility and the significance of place, even as those who come after us have no such emotional connections to the same spots.

Also this: “There is such unexpected beauty in the visual bric-a-brac of the roadside: those great sad homes on the edges of small towns in western Maryland lit by electric candles in front of window curtains…” Shriek! I grew up in just such a house in that exact location! He’s hitting close to my hometown as the National Road actually runs through it, and the house I speak of sits directly on it, so that was a surreal moment, although I’m surely assuming too much.

Still, exciting to see anything about this area in print (actually the region got a brief mention in Liar’s Circus too, but nothing evocative like here). So when this makes personal connections they’re powerful, but when not I had trouble appreciating it.

The National Road: Dispatches From a Changing America, by Tom Zoellner, published October 13, 2020 by Counterpoint. Bookshop.org

We make sense of violent events by choosing to deny that they happened — or by blaming the victim. This is true even if the victim is yourself.

Sarah Kasbeer’s A Woman, A Plan, An Outline of a Man circles ideas of trauma and how to make sense of it many years later, after it’s been simmering for awhile. It affectingly opens with an epigraph from Anna Akhmatova: “You are so many years late, / Nevertheless I am glad you came” which is quite fitting for its topics.

Kasbeer grew up in Illinois before moving to New York City, and these pieces draw on her adolescent experiences particularly around sexuality and the sort of microtraumas that eventually lead to things bigger and badder. Am I explaining this well? I mean the little pains and experiences that build up to lasting insecurity, and to cope with ever heightening mental pain of it all we self-medicate in various ways — casual sex being a big one here — that scar us more.

There are two main traumas that Kasbeer traces, retelling both multiple times in different ways across various essays. The first is an assault by her teenage boyfriend, who served prison time. The second is a rape that occurred while she was living in Chicago. She has complicated feelings around both, and seems to tell them to make sense of them, and examine how those perceptions have evolved with time.

There’s something quietly terrifying in all of it, because a lot of what she describes isn’t entirely harrowing — these two major traumas aside, obviously — I think they’re events that are quite common for many teenage girls and young women growing up in the US. I say this from a purely anecdotal perspective, but one nevertheless universal among every woman I’ve spoken with intimately, and as the #MeToo era has shown, assault, harassment, and worse are omnipresent.

At times she employs a sharp black humor, and the writing is often poetic. Elsewhere a concept builds that never quite lands, like in one essay about Fiona Apple, herself a model of sorts for many women as she’s always been open about her rape at a very young age and lets the pain of this experience and others appear raw and unfiltered in her music. It seemed a good fit for Kasbeer to explore something, but it never quite coalesces into deeper meaning. And sometimes these stories felt uncomfortably intimate, and I felt myself squirming at things like peeking into her therapy. A real appreciation for confessional writing is necessary, and I expect it will greatly appeal to those who have that.

More than anything, this made me excited to see what she’ll write in the future, because there’s promise at its core. I can’t actually say I enjoyed these — I felt shaken, disturbed, annoyed, and perhaps deeply uncomfortable at the memories it shook loose from my own teens and high school experiences. Although that should probably be a testament to some power in it. (published October 1, 2020 by Zone 3 Press) Bookshop.org

I received advance copies courtesy of the respective publishers for unbiased review.

7 thoughts on “New Essay Collections: The National Road & A Woman, A Plan, An Outline of a Man”