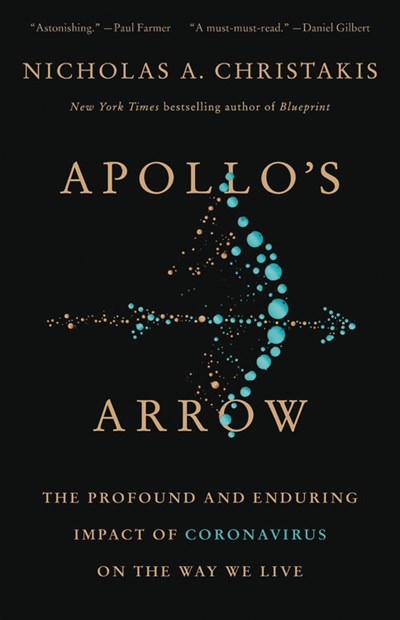 It seemed to me that the novel coronavirus was a threat that was both wholly new and deeply ancient.

Yale sociologist, public health educator, and former hospice physician Nicholas A. Christakis’s Apollo’s Arrow covers the coronavirus pandemic, drawing comparisons to previous plagues and pandemics from history and mythology, and gives educated insight into what possibilities and scenarios we face in the future. I’ve never felt like more of an underachiever since he wrote this whole book in the last few months, but also, how commendable. The information compiled here is accessible and a welcome weapon against the excesses of misinformation and conspiracy that have proliferated this year.

I hope to help others understand what we are confronting, both biologically and socially, to outline how humans have faced similar threats in the past, and to explain how we will get to the other side of this, which we will, albeit after tremendous sorrow.

He uses the oft-employed butterfly effect metaphor, of a butterfly flapping its wings in China and causing a tornado in Texas, or any number of similar variants on location, distance, and natural disaster, to describe the virus’s spillover as “a tiny thing that we cannot see that made a move we could not observe.”

He goes on to explain how basic, important epidemiological concepts function, like R0 — the number of people that one infected person can further infect — and uses these as predictors to interpret what we’re facing. The book also looks at historical precedents and how the same tools served before, like how contact tracing identified asymptomatic super-spreader Typhoid Mary. Christakis explains scientific concepts in layman’s terms, making this an invaluable reference.

Perhaps one of the biggest, clearest points he makes is that you need to wear a fucking mask (my words, not his). Here are his, based on a policy analysis done with Yale colleagues in April, put in terms that even a money-obsessed corporate business demon who only cares about the economy can understand:

We found the growth rate of death was 21 percent in countries without mask norms and 11 percent in countries with such norms. If every household in the United States used cloth face masks, it would conservatively generate at least three thousand dollars in value per household from the reduced mortality risk arising from the reduction in spread of the virus. Indeed, even if masks reduced the transmission rate of the virus by only 10 percent, our models indicate that hundreds of thousands of deaths would be prevented around the world, creating trillions of dollars in economic value. This is a big effect of a small thing.

He emphasizes that the six-foot distancing standard is likely optimistic; so again, put a piece of cloth over your face. It is absolutely the very least you can do.

In looking at past disease outbreaks, like that of SARS-2 in 2003, he compares that virus to the variant currently plaguing us and clarifies differences between a deadlier virus but one that’s more difficult to transmit (Ebola, for instance) and the effects of easier transmissibility we have now, using this information to emphasize the importance of testing asymptomatic people.

On the forward-looking front, there’s a lot of good news and bad news. Let’s get the potentially biggest, baddest news out of the way first: Christakis posits that things won’t be entirely back to “normal,” however we’re defining that moving forward, until 2024, which is what he identifies as the post-pandemic period. Until then, we’ll “still be recovering from the overall clinical, psychological, social, and economic shock of the pandemic and the adjustments it required.” (You can take a break to breathe into a paper bag here if necessary.)

The good news is that there’s nothing new under the sun, except perhaps new variants of coronaviruses. But otherwise we’ve seen all this before in numerous iterations. I think I most appreciated the sections addressing prior pandemics and showing how our behavior, which at times this year has been so disappointing and reprehensible, isn’t new either. In some way this is reassuring, in that we’ve acted horrible and mistrusted science before and still, eventually, we get through it thanks to the better qualities of humanity.

Christakis explains that we’re currently on an inevitable path to herd immunity “advertently or inadvertently,” and clarifies what that means and why employing it as go-to strategy, as some advocated, is madness. I also found it very interesting that historically as well as presently, international border closures have not been overwhelmingly effective, mainly because by the time the pathogen has spread it’s already too late, and border closure becomes the old standby of other-blaming.

There’s a vagueness (understandably!) around many assertions here, and some are more this-or-that scenarios. Which, obviously — no one is psychic and we’re basically all riding this thing out day to day with even experts sometimes disagreeing on best courses, analysis, and everything else. But it did make for a general unsatisfying feeling at times, which is maybe unfair for me to even mention because what more could be expected of a book this current?

His criticism of the US government’s pandemic response was measured and careful, and he only sporadically mentions Trump himself. He does say that “It’s hard to overstate the Keystone Cops flavor to this stage of the country’s pandemic response,” in February and March which is darkly hilarious until it sinks in and then it’s just dark.

He also refers to the people who take second-place to the Trump administration as the worst, referring to Alex Jones as “the Sandy Hook massacre denier who appears to endlessly search for ways to profit from other people’s sorrow” (that should be on his business card) in a particularly enlightening section that addresses my eternal nemeses, wellness bloggers and herbal-remedy purveyors, who saw public confusion as opportunity.

It was interesting to consider how things might change in the future. Christakis points out that we easily forget how the world used to be. The 1918 influenza pandemic emphasized how unsanitary spittoons and “public spitting” were (I feel like too many ghouls still do this anyway).

Speaking of the 1918 flu pandemic, it’s the one referenced most often in comparison to our current situation, but Apollo’s Arrow shows how many other times we’ve been confronted with the pathogens that are far more numerous than us in the world, been brought low on a global scale, and eventually, weakened but changed, rebounded and began again. It’s exhausting, heartbreaking, and challenging in ways we couldn’t have imagined but it happens and we’ll get through it.

I know many people are looking to avoid delving deeper into this topic, but I promise it feels better to be armed with knowledge than any alternative. Apollo’s Arrow is data-driven, not alarmist, and there’s plenty here about our human “capacities for altruism, cooperation, and teaching,” which Christakis gently reminds can’t be destroyed by viruses and are what’s guided us through past devastation.

So that’s a lot of words to say this can be a tough, scary read, mainly just because of the uncertainties that remain, but it’s so worthwhile for how informative and enlightening it is. I’ve been thinking of it often since reading it. I learned so much that feels useful, if not crucial. It’s a vital guide for understanding what we’re going through and still face.

But blind hope is a fickle companion for our woe. It is not enough. Still, by forcing our gaze to the future, hope can serve another purpose: it can motivate us to prepare.

Microbes have shaped our evolutionary trajectory since the origin of our species. Epidemics have done so for many thousands of years. Like the myth of Apollo’s arrows, they have been a part of our story all along. We have outlived them before, using the biological and social tools at our disposal. Life will return to normal. Plagues always end. And, like plagues, hope is an enduring part of the human condition.

Apollo’s Arrow:
The Profound and Enduring Impact of Coronavirus on the Way We Live
by Nicholas A. Christakis
published October 27, 2020 by Little, Brown Spark

I received a copy courtesy of the publisher for unbiased review.

14 thoughts on “Past and Future of the Pandemic”