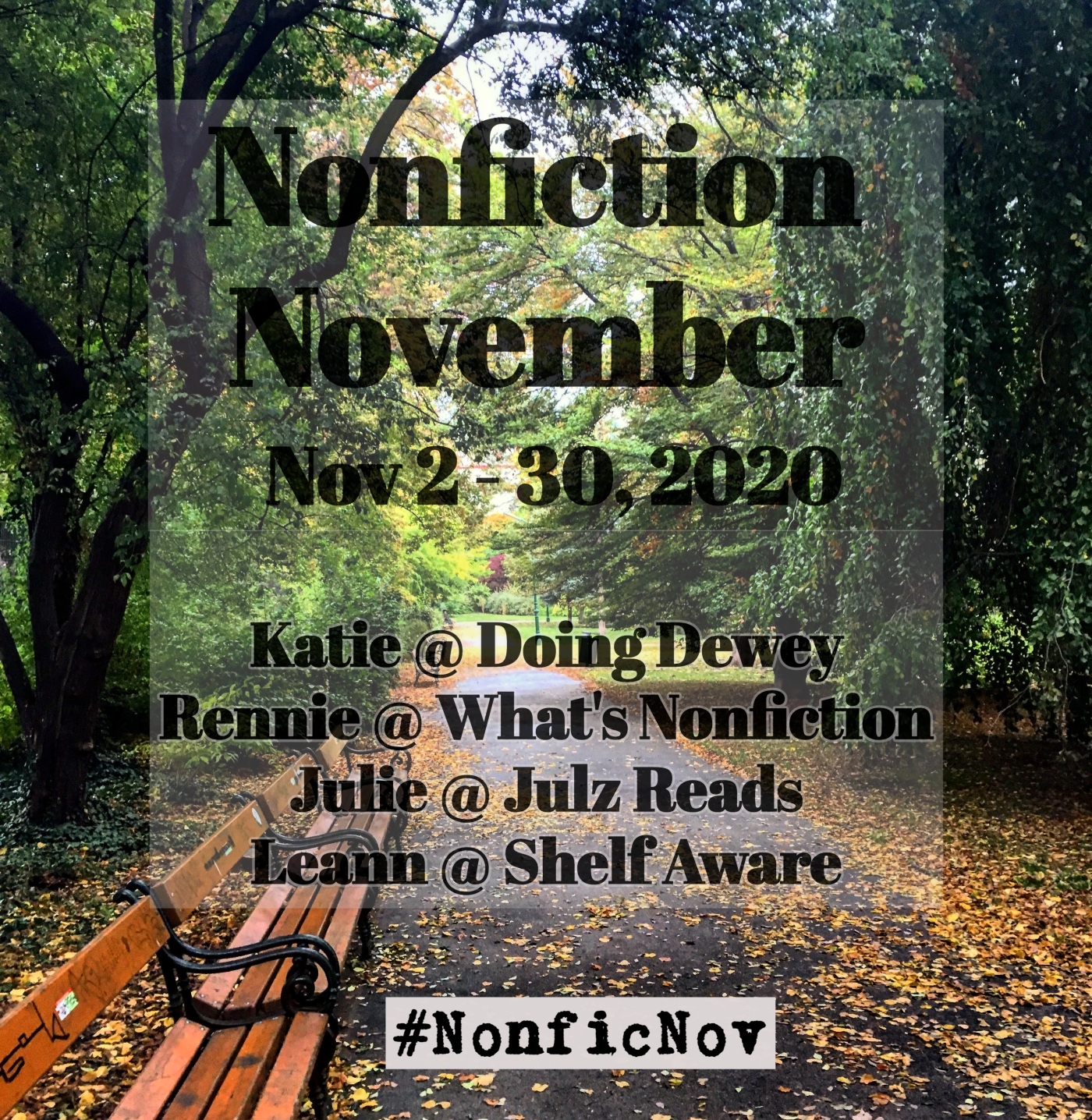 Happy first (second? what is time?) day of Nonfiction November!

I’m even more excited than usual to celebrate nonfiction right now, mainly because 2020 hasn’t been a spectacular reading year for me (in addition to every other reason it’s been the worst, obviously). My attention has been spread unusually thin and my reading is basically half of what it’s been the last few years. So I’m extra delighted to have Nonfiction November happening to help motivate and make me feel more like myself again, at least in terms of reading.

Don’t forget we also have an Instagram challenge if you’re not up for blogging — see the daily prompts from @Shelf_Aware_ and @JulzReads. I want to try to take part in the Insta-side of things this year too but no promises, because life, 2020, etc. Feel free to connect with me though: @rennie.ssance as I’d love to see your #nonficnov posts (but also, mine’s not strictly a bookstagram, so fair warning).

So our prompt this week:

Week 1: (November 2-6) – Your Year in Nonfiction (Leann @ Shelf Aware): Take a look back at your year of nonfiction and reflect on the following questions – What was your favorite nonfiction read of the year? Do you have a particular topic you’ve been attracted to more this year? What nonfiction book have you recommended the most? What are you hoping to get out of participating in Nonfiction November?

As usual, I’ll use this prompt more to look at what trends and topics I gravitated towards. (Since I only read nonfiction and my year’s favorites wrap-ups will come next month, I try not to be redundant.)

My biggest trend was reading about (public) health-related topics. Quelle surprise! Information saturation was one thing I found helped to soothe the multitude of horrors this year threw at us.

David Quammen’s Spillover was a compellingly written, super-informative look at zoonoses, how they cross from animals into humans, what we know about combating them, and what it means for the future.

Biography of Resistance is an accessible, fascinating-if-chilling look at the dangers in misuse / overuse of antibiotics. Yes, I know we don’t need one more thing to worry about in terms of public health this year, but our collective misunderstanding of antibiotics disturbs me endlessly. No matter what we’re sick with, too many people seem to think an antibiotic cures it, and this has caused serious issues of resistance with no new antibiotics in the pipeline. It’s worth understanding, and Muhammad H. Zaman is an excellent writer and historian, drawing stories from around the globe and across decades to put this problem and potential solutions into clear context.

Nicholas A. Christakis’ Apollo’s Arrow was an up-to-the-minute analysis of what’s happened this year, how it compares to past pandemics and plagues, where we’re headed, and what’s important to know about epidemiology as we try to get there. I found it massively helpful in understanding how and why we’ve reacted as we have (conspiracy theories and wretched behavior in such circumstances is sadly nothing new).

I’ve also found myself reading more about health and the body in general, a topic that, given my extreme squeamishness most of my life, surprised even me. Bill Bryson’s The Body (I haven’t reviewed it yet and not sure how to, really!) was an immediate favorite — surprisingly, since I’m meh on his other books I’ve read.

James Hamblin’s Clean: The New Science of Skin, about how we fuss with our skin too much and overspend on useless products, was similarly informative, funny, and personally very helpful. Hamblin is an MD and writes on popular health topics for The Atlantic. I just finished his previous book If Our Bodies Could Talk, which was also interesting and debunked weird but long-held ideas and myths in health and medicine, although it’s not quite as revealing or surprising as The Body or Clean.

I’ve had a lot of luck with outstanding essay collections this year. My favorites:

Here For It: Or, How to Save Your Soul in America; Essays, R. Eric Thomas

The Unreality of Memory, Elisa Gabbert

So You’re a Little Sad, So What? : Nice Things to Say to Yourself on Bad Days and Other Essays, Alicia Tobin

Not a Novel: A Memoir in Pieces, Jenny Erpenbeck

The Age of Skin, Dubravka Ugresic (review coming for the release on 11/17)

As a bonus, those last two are by women in translation.

I had an inexplicable draw towards ocean-related nonfiction this year, starting with two of Rachel Carson’s books about oceanic ecosystems and processes. Then two on whales — Philip Hoare’s excellent work of nature, history, and culture The Whale: In Search of the Giants of the Sea and the so-so but still enjoyable Fathoms: The World in the Whale by Rebecca Giggs, plus the fantastic, world-expanding Deep: Freediving, Renegade Science, and What the Ocean Tells Us About Ourselves, about the extreme sport and a look at underwater worlds at different depths and human interactions there.

I’ve also been loving follow-the-money stories, especially the eerie, shocking, well-written and occasionally darkly funny Dark Towers: Deutsche Bank, Donald Trump, and an Epic Trail of Destruction, Flash Crash: A Trading Savant, a Global Manhunt, and the Most Mysterious Market Crash in History, and Putin’s People: How the KGB Took Back Russia and Then Took On the West.

My current read is Jane Mayer’s Dark Money: The Hidden History of the Billionaires Behind the Rise of the Radical Right, a book I don’t know why I waited so long to read and perhaps pre-election week wasn’t the best timing, but every American voter should read it. Billion Dollar Whale: The Man Who Fooled Wall Street, Hollywood, and the World is the next follow-the-money on my list.

On the other hand, this year I’ve read way less in two categories I usually read widely in: food industry/foodoir and true crime. I found it difficult to focus on foodie titles and abandoned more than I finished, and my interest in non-financial true crime was low.

How’s your year in nonfiction been?