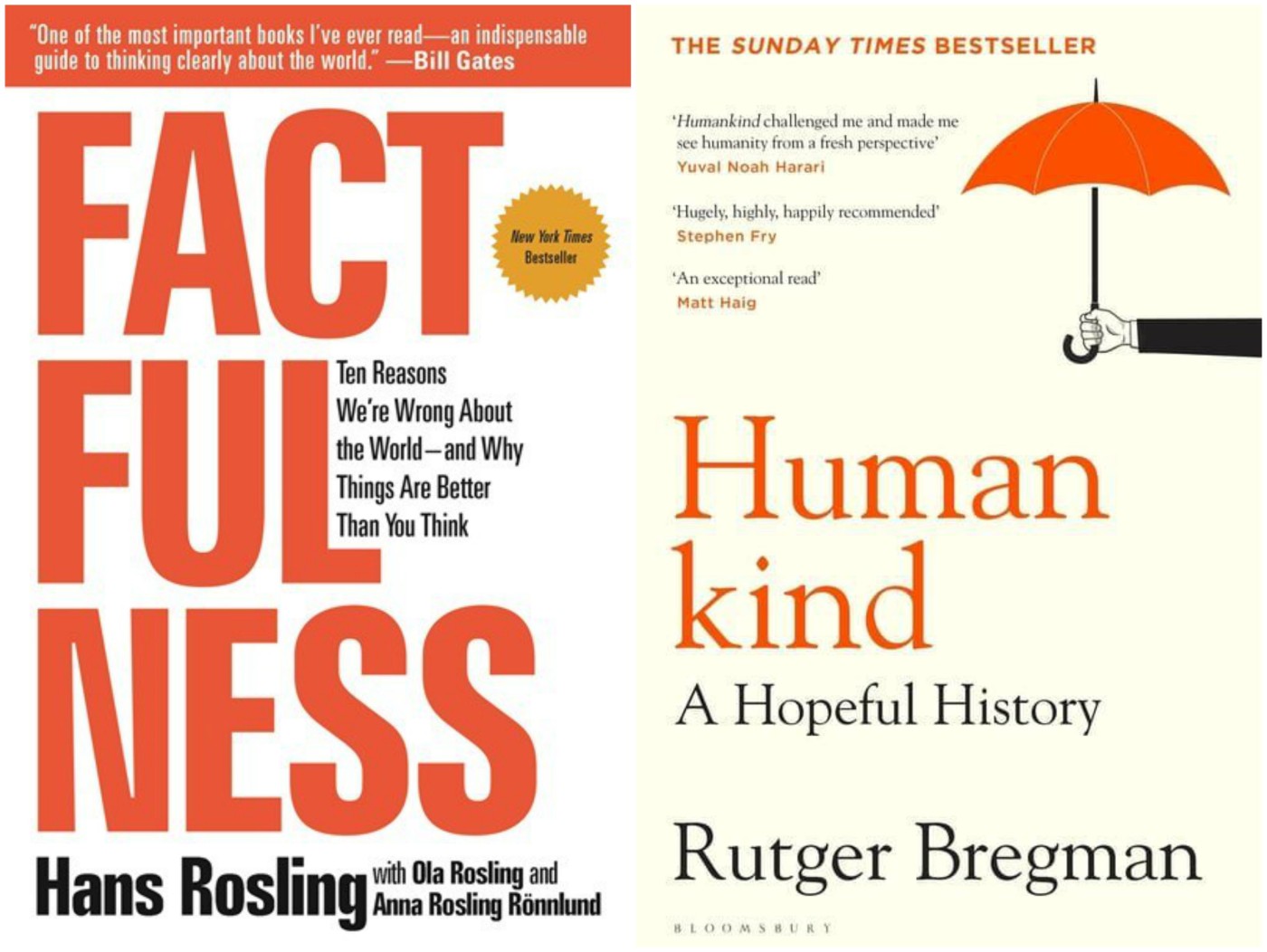 As we know, 2020 has been the living worst. A helpful balm for the seemingly endless parade of horrors this year has thrown at us is reading some facts about how the state of the world and humanity in general aren’t as horrible as they might seem or feel. Let’s investigate.

First is Factfulness: Ten Reasons We’re Wrong About the World–and Why Things Are Better Than You Think, by Hans Rosling. Rosling was a Swedish doctor, global health researcher, and Professor of International Health at Karolinska Institute in Stockholm. He wrote Factfulness with his son Ola Rosling and daughter-in-law Anna Rosling Rönnlund.

The book stemmed from the premise that during his work as a public speaker, he asked many people across widely varied social groups simple questions about global trends — like around poverty, the prevalence of girls worldwide being educated, whether terrorism is increasing, etc. — and despite high levels of education and worldly experience, most of these people got the answers wrong. The widely held perception tended towards the doom and gloom; that things were on the whole getting worse.

But Rosling was a data junkie and his masses of research showed otherwise — we’re living in the best of times, despite what the news might zero in on. So with the aid of many charts (so, so many charts) he shows what’s really happening and offers helpful tips for news consumption to avoid the sensational and cherry-picked bad news stories, as well as how to process stories and information yourself to make sure that it’s factful.

It’s very TED Talk-y, so your appreciation of it will probably depend on how much you enjoy that style. And how much you enjoy charts. I can take a few, but this was a bit much. Still, the overall messages were meaningful and helpful. And I liked the book better as it went on — it didn’t grab me at the beginning but perhaps, like the general progression of the world he’s arguing for, it got better.

Among his tips for sifting the factful from the fictitious or skewed data is being able to distinguish between a level (bad) and a direction of change (better): “Convince yourself that things can be both better and bad.” That’s a simple truth but an easily forgotten one. So I pulled several helpful ideas from it, but maybe I’d heard too much about this book already, as I wasn’t as surprised by a lot of the bottom lines as the people he quizzed were.

I also felt a bit skeptical about some of the data, which was often surprisingly non-specific, like around the global increase in girls finishing primary school. It’s a bit of an abrupt conclusion, too. I don’t mean to sound cynical (we’ll come back to that) but I kept thinking, “And?” Finishing school while female is already a massive achievement, particularly in certain parts of the world, I’ll grant you. But primary school is just that — primary. It says nothing about secondary education, work prospects, if higher education can be pursued, etc. I’m not trying to diminish the significance, just considering the wider context, I suppose.

The sections around how many people worldwide are lifting out of poverty were the ones I learned the most from. I especially liked his analysis of Africa and Asia as the world regions that will move into the fore of international business, finance, and the like in the near future. This was fascinating.

Rosling calls himself “possibilistic,” which is a good way to be. I didn’t find this overly sunshiney or unrealistic, just a good analysis of the bigger picture and possibilities for where things are going. Of course, it was published in 2018, and it would be interesting to see how some of these topics, particularly economic ones, have been impacted by the events of 2020.

His son and daughter-in-law write about finishing the book after his death from pancreatic cancer in 2017, and I think their description of him and his passion for his work made me appreciate it more. In an adorably sweet anecdote, they emphasize how he felt about the world: “concerned and full of joy.”

And now something to temper your cynicism. It seems the longer I live the more cynical I inevitably become. I thought the premise of Rutger Bregman’s Humankind: A Hopeful History sounded interesting — that humankind is on the whole decent and good, not war-mongering, vicious, and angry. But I expected to be a tad disappointed like by Factfulness and for there to be a lot of cherry-picking. I’m skeptical about the kind of Malcolm Gladwell-y books that set out to prove a big theory at whatever cost and conveniently ignore any pesky facts that impede that.

Bregman, a Dutch historian, systematically moves through 200,000 years of history, ticking off the points of a Hobbesian worldview and debunking them using case studies from across disciplines, including some very well-known or infamous examples. He draws from archaeology, anthropology, prehistory, popular culture, and genetics and biology. There are so many stories told and all of them written in a massively compelling way. I couldn’t wait to read this every night.

The basic idea is that veneer theory, the label drawn from Thomas Hobbes’s concepts of human morality and applied to many of our social structures and responsible for a lot of our systems, is inherently flawed. So his argument is that a perception that life, and humans thereby, as being “nasty, brutish, and short” is fundamentally wrong — the opposite, actually. (I admit I don’t know much about Hobbesian philosophy and totally thought those were just Tom Waits lyrics from “Come On Up to the House”. I learned a lot from this book!)

Bregman’s strongest case might be the real-life Lord of the Flies, including parallels he draws between reality TV and the book, its literary precursor. Both have the premise “that human beings, when left to their own devices, behave like beasts.” (Survivor‘s creator read the novel multiple times.) But as we learn more about its author and the real-life incident of shipwrecked boys, it’s clear that it’s fiction from a disturbed person and actual events differed significantly.

I found one of the most affecting stories to be his recounting of the visits of North Dakota’s top prison officials to Norway, which has instituted a very different system of prisons to that in the US, resulting in lower rates of recidivism and more successful returns to society, not to mention the basic humanity it allows guards and prisoners. The flip side is the infamous Stanford Prison Experiment, a longtime sticking point for Bregman in developing his theories, until he looked closer. Turns out it’s a lie-filled mess! The researcher responsible, Philip Zimbardo, also contributed to the dangerously incorrect broken windows theory, which has led to some extremely terrible policing in the US.

He also looks at the Milgram experiment (that of administering shocks despite a subject’s obvious pain, used often to explain the Nazi just-following-orders defense), the already debunked Kitty Genovese/bystander effect, and what really happened to the population of Easter Island.

That’s where I hesitated a bit in loving this book unconditionally, because although the theories from the likes of Jared Diamond and others can be challenged, Bregman’s ideas about what happened leave the Easter Islanders in a much better light but have something truly awful to say about other humans. So this felt to me like the most cherry-picked, although I liked the way he told the history.

But overall it’s reassuring and hopeful — there are many systems that can benefit from dismantling our pessimistic Hobbesian worldview. A lot of lessons here that I needed.

Have you read either of these? Any books making you feel better about the state of the world / those in it lately?