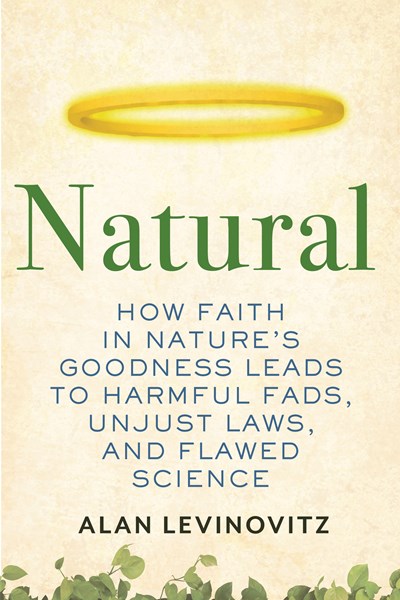 An unexpected benefit of lockdown (we have to take little joys where we find them) has been getting to virtually snoop through people’s bookshelves in Zoom meetings. Some journalists have done the good work of putting together lists of titles they’ve spotted on shelves during interviews.

Dr. Fauci’s books made it into one of these features, and included a title that grabbed me so hard I couldn’t put the library hold in fast enough: Natural: How Faith in Nature’s Goodness Leads to Harmful Fads, Unjust Laws, and Flawed Science, by Alan Levinovitz.

This tearing-down of the pedestal on which we place anything “natural” is something I’m deeply interested in thanks to two excellent books I constantly reference: The Angry Chef and Bad Science. Although Natural also examines specific instances of “natural” products or foods purported to be superior, like vanilla flavoring, for example, it focuses more on where this underlying idea came from, why it’s so deeply entrenched across cultures, and how it’s causing dangerous legislation to be enacted on unsound principles.

Levinovitz, a religious studies professor at James Madison University, emphasizes that this isn’t merely a US-based belief, either: “Variations on the idea of “natural goodness” are ubiquitous in all intellectual traditions, ancient and modern, East and West.” The peeling back of layers around topics like food, processing, medical treatment, supplements versus pharmaceuticals, brands like Goop’s “aspirational” use of natural cosmetics and beauty products versus chemical-laden junk for poors, and just generally using the argument that natural is better to justify your position on everything from vaccines to vanilla is an important undertaking, and a complex topic that actually ends up quite simple once those layers come off.

At the very heart of it, this entire thing boils down to:

“Nature” is another term for God; “natural,” a synonym for holy.”

This includes a sort of obsessive worship of an idealized, mythical, paradise-type past where our ancestors ate from the pure land and lived blessed, charmed lives because of it (he likens it to the creation story), never mind that we currently live longer, better, safer, and healthier than any other time in existence by most applicable metrics. We could just end this discussion here, really. This idea, of natural equating with holiness, has since bled into so many facets of our lives, health and healthcare, and consumption that it’s borderline ridiculous. Maybe even more so considering how flexible the concepts of nature and the natural are. Levinovitz somewhat brilliantly sums it up thus: “Natural goodness sounds great in theory, but in practice it’s a mercenary ethic that anyone can hire to fight for their cause.”

That includes what our definition of nature even is, and what’s so worth emulating about it — he makes a sobering point by referencing Werner Herzog’s documentary Grizzly Man, in which the film’s doomed subject saw empathy and wisdom in the stare of the bears he lived with, but Herzog saw hostility and indifference.

Again, this is the heart of it. We automatically give credence to the idea that anything natural has to be better because it hasn’t been soiled with dirty manmade greed or ulterior motives, and yet you can bend and twist its definition to whatever cause you need it to serve.

He even says that “good science is no antidote” to this problem: “Justifying same-sex marriage by pointing to homosexual activity in primates, or to genetic determinants of sexual orientation, only repeats the fundamental mistake of seeking morality in the mirror of nature.” This was an interesting reframing I hadn’t considered, because I’ve felt that leaning more heavily on science as an antidote seems to be the best option for dispelling the cult of all things natural. I do still believe that, but there’s a lot more to consider here.

I didn’t always enjoy — or follow well — the religious theory, even if it was broken down fairly well for the most part. It still read pretty densely. The strongest chapter, and the one I got most out of, was around those who eschew modern medicine in favor of “natural” healing techniques that are untested, unproven, or, most often, ineffectual. Levinovitz makes a sympathetic, sensitive case for why people go this route, and his look at it felt comprehensive and, actually, heartbreaking. Sometimes it’s because all else is tried and failed, other times it’s lack of access to treatment or medication, justified mistrust of the medical establishment, and so much more.

The book is worthwhile for this chapter alone, and likewise for his message that “Open-mindedness about people’s sacred rituals may be a virtue, but doctors and scientists should repudiate anecdotes and practices that are not supported by evidence, religious or otherwise. Hope is important, but it’s clearly malpractice to promise […] that thanks to the healing power of nature, ‘everything you struggle with can be easily solved.'” I couldn’t agree more.

The legal aspects promised did feel a bit thin to me, but in the medical chapter Levinovitz cites one case involving Native American beliefs that were manipulated and exploited and led to legal issues over who has the right to refuse proven medical treatment. This is simply fascinating, and religion’s role in medicine I’m excited to read an entire book about.

The best statistic around religion I took from it was a quick look at widespread belief in the power of prayer in medical healing — the prevalence is much more than I imagined, and I’d already assumed it was high: he quotes a 2004 Newsweek poll that found “72 percent of Americans ‘praying to God can cure someone — even if science says the person doesn’t stand a chance.'”

This is a tricky area that unfortunately, for a multitude of reasons, is already very far gone. Natural is a good look at how we got here.

21 thoughts on “From Vaccines to Vanilla: Getting to the Heart of Our Obsession with “Natural””