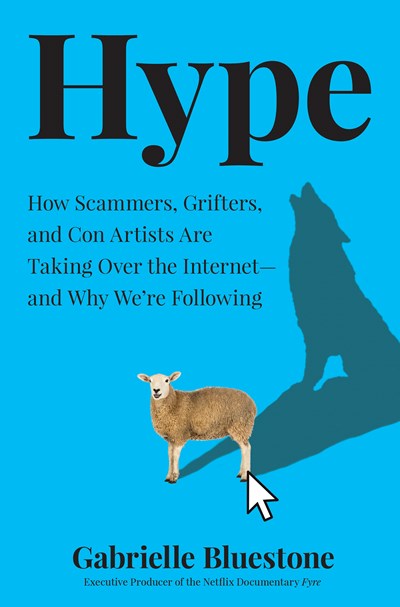 Hype: How Scammers, Grifters, and Con Artists Are Taking Over the Internet―and Why We’re Following

The story of the Fyre Festival, which saw Instagram influencers tricked into promoting a music festival on a private Bahamian island with luxury accommodations, gourmet dining and a picturesque setting, only to turn out to be a few rain-soaked tents with cheese sandwiches in a gravel pit with no celebrities, hasn’t interested me. I couldn’t believe there were multiple documentaries and podcasts dedicated to the saga of rich millennials fooled into wasting money on an Instagrammable event intended to boost their social cache.

But it turns out there’s more to the story, mainly to what it says about the current social culture, including our social media obsession, and our tendency to put what we want to believe over instincts that something’s wrong or too good to be true. Hype: How Scammers, Grifters, and Con Artists Are Taking Over the Internet―and Why We’re Following, by Vice journalist and executive producer of the Netflix Fyre documentary Gabrielle Bluestone, promised a wider take in the context of other recent internet grifters and our social media-primed susceptibility to the scams. This topic is irresistible to me, and the book is a must-read if you feel similarly.

The experts call this a post-truth world, a concept that arguably originated with Friedrich Nietzsche but took on particular urgency after it was named Oxford’s 2016 word of the year. It’s most commonly invoked to refer to Trump’s election and Brexit, but I see it playing out everywhere, whether it’s the influencers we take style cues from, the experts we turn to for health advice, or the consumer reviews we consult before making purchases. We believe what feels right, and there’s plenty of evidence for us to gather once we’ve already decided the conclusion.

The narrative is built around that now-infamous Fyre festival and it’s the most examined story here, beginning with its perpetrator, Billy McFarland, who has quite a history of defrauding investors of various millennial-targeted ventures. Building on McFarland’s place in this specific moment of obsession over wanting to be seen and a fixation on controlling our perceptions and online personas, Bluestone looks at other influencers and the “rampant consumerism framed as individuality” – a good summary of social media’s swerve towards marketing in recent years.

Bluestone loops in stories of other web-savvy entrepreneurs who have been less than forthcoming about their business problems and missteps at the expense of their investors or followers, like WeWork’s Adam Neumann and Instagram fashion blogger Danielle Bernstein. It can be depressing, as I always find it to be learning about these people and this superficial culture and how much money it involves, but Bluestone mostly focuses on emphasizing the ridiculousness of it all. Or maybe I read it that way since I already came to it thinking that. There’s not a lot of actionable information, but at least it’s a warning of the dangers of succumbing to glossy, carefully filtered messaging and marketing, and influencer envy.

It could’ve been tightened, because the research and some intriguing key concepts are there but it doesn’t feel streamlined or sufficiently organized. The analysis is strong when it happens, but there’s not quite enough of it, instead focusing on the actual stories of grifts and grifters. Entertaining as they are, and maybe there’s some schadenfreude element, it still feels a bit anticlimactic ultimately. At times the narrative can be confusing, although this tends to be the case when fraud and subjugation are involved. At one point she writes “None of it made any sense,” which basically summed up the entire Fyre story to me.

I didn’t like that the majority of quotes were used in their entirety without editing for clarity, i.e., very colloquial speech, which made wading through them for the meaning a test of patience (as a fellow millennial I know how hard it is to break oneself from reliance on “like” when speaking, but it should’ve been cleaned up for writing like this).

Elsewhere some quotes seem strange presented without sufficient commentary. This gave me pause: Calvin Wells, “a venture capitalist who tried to whistleblow on the Fyre Festival,” uses an example of how the money and fame from pulling off something like Fyre was motivational, saying that you could be “working a quiet job at the Sprint store making $60,000 a year plus health care” or aim for mega-weath like McFarland. Is this a Lucille Bluth “It’s one banana, Michael, what could it cost? $10?” moment? (RIP Jessica Walter!) Does a Sprint store job really pay $60K plus healthcare? I had many moments of feeling like I lived in a different reality than the figures involved here, and I think that’s probably a very good thing.

She closes by tying the idea of false narratives into one of the biggest conspiracy-theory dramas to play out on social media recently, the coronavirus and the Trump administration’s handling of it. She quotes infectious disease expert Dr. William Haseltine: “Belief trumps facts every time.” That seems to be the lesson here unless we actively work to disallow it.

(One last thing on Trump: apparently he once marketed “a urine-test kit which promised to diagnose vitamin deficiencies.” Why did we always hear about the steaks and the vodka and the airline-gone-bust and not this?! Did anyone else know about this? It’s the first I’m hearing. Why is he so weird and why does he love everything that’s garbage?)

It’s a worthwhile read for some warning about the dangers of trusting too deeply in what we see on social media. This tends to be a punchline about the baby boomer generation, but it’s applicable to millennials and whatever the generation after is too. Bluestone deftly shows how we all can be suckered by hype and artifice, and how con artists and scammers adapt their tricks and tools to the changing social media structures. It’s page-turning and sometimes jaw-dropping, a good look at why we’ve become primed by internet culture to accept what we want to believe over the obvious truth. (Would make a good read-along with Sarah Frier’s No Filter, about Instagram and the culture it’s built.)

Hype:
How Scammers, Grifters, and Con Artists Are Taking Over the Internet―and Why We’re Following
by Gabrielle Bluestone
published April 6, 2021 by Hanover Square Press

24 thoughts on “Conning Culture: Hype in the Social Media Age”