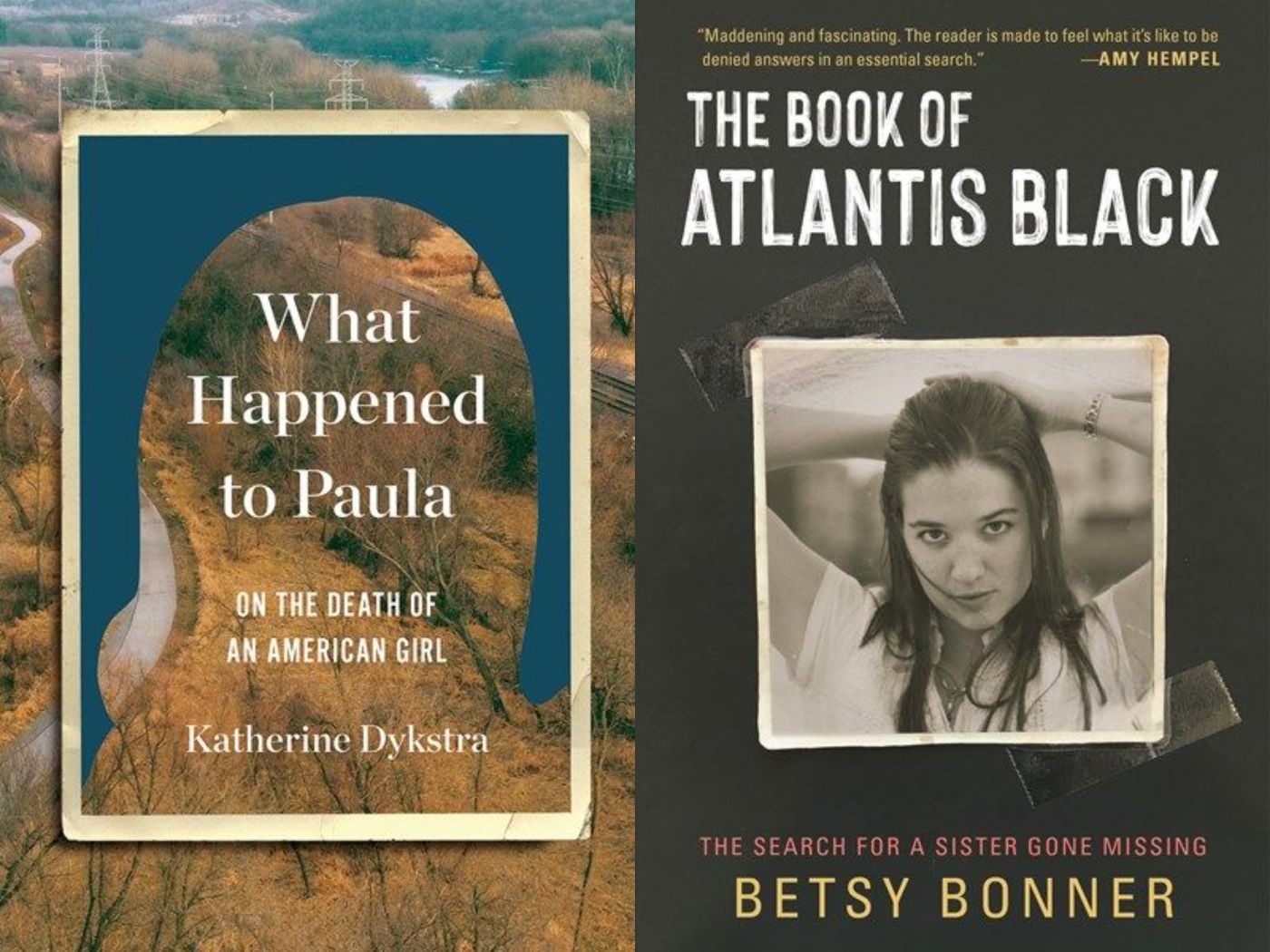 What Happened to Paula: On the Death of an American Girl, by Katherine Dykstra

Katherine Dykstra’s mother-in-law roped her into the story of Paula Oberbroeckling, an 18-year-old from Cedar Rapids, Iowa, who disappeared one summer night in 1970. Her remains were found a few months later but a cause of death was never determined.

Instead, the lack of answers and decades of speculation around what happened to her gave rise to a number of narratives and theories, the most prevalent of which was that she’d died during an illegal abortion gone wrong. She’d also been dating a Black classmate, which had led to such friction with her mother that she’d recently moved out of her family home.

Dykstra’s mother-in-law had collected a wealth of information and files but had hit a wall in her attempt to make a documentary, and so Dykstra, a writer and teacher, took a fresh look instead.

She tells the story by retracing what’s known of Paula’s life and her last night, and juxtaposing it with a sociological study of what the framework of life in America was at the time for young women of her age and background. It was a dangerous one even for women with plenty of privilege, as Paula had, thanks to the attitudes towards women’s rights and safety that led women to be incredibly vulnerable.

The investigation into a local doctor who’d allegedly given illegal abortions with some dangerous outcomes was fascinating, as was Dykstra’s parsing of how Paula fit into the social structures allowed to women in the 1960s.

Unfortunately, this is also part memoir, and it falls into the easy trap of making things about the author that shouldn’t be. I’m not sure where this insistence on showing why a story matters to you came from or why it’s become such a mega-popular genre. I suppose because when memoir is woven into a crime story and works, it does so brilliantly — We Keep the Dead Close, The Red Parts, and The Fact of a Body are excellent examples. But when it doesn’t work, it’s irritating and distracting.

Dykstra does great work in showing how Paula was both hemmed in by the standards of her time but also a self-assured, forward-thinking rebel, anti-racist and unwilling to accept her circumstances because it’s what was expected of women. In showing things about her story that are universal; namely, the danger of limited options for women’s reproductive choices as well as the danger of assault and sexual violence, she weaves in her own experiences and some from her mother-in-law. To some extent, this works because it does underscore that universality, horrifying as it is, and creates so much empathy for Paula and her peers in a time when they were denied the dignity of a safe, legal medical abortion, among other things.

But elsewhere, the links feel tenuous. Dykstra tells a melodramatic-feeling story about taking the morning-after pill after a broken condom incident, I think it was. I was rolling my eyes at how minor the episode came across although it was built up as an event of great significance on par with others here which are truly disturbing, such as her mother-in-law’s assault by an abortion doctor. The drama of a Plan B pill was not a story that belonged here, at least not in the level of detail it received. I skimmed some memoir sections because the interest just wasn’t there, although Dykstra is a compelling writer. It all feels like filler to both Paula’s story and to the greater social issues.

Otherwise, it’s pretty compelling, Paula’s life and memory are handled sensitively, and although it does feel ultimately unsatisfying (as much work and research as the two women have put into this, Paula’s case remains unsolved), that’s not the author’s fault. It’s a testament rather to how important she made Paula’s story feel as a sociological episode, regardless of what led to her death, and how much she brought of this woman, only a teenager when she died, to life.

Paula had danger lurking around every corner. Because of the era and because of her familial situation, there was no one to advise Paula on how to respond to domestic peril, nor did she likely have the voice or the vocabulary with which to combat it herself. Place this climate of normalized violence adjacent the movement toward sexual liberation and you have a dangerous dichotomy. On one hand, violence was implicit and accepted; on the other hand, the push toward sexual freedom necessitated trusting the opposite sex. These forces were in direct opposition. Women are encouraged to embrace the very people who could hurt them without repercussion.

published June 15, 2021 by W. W. Norton. I received an advance copy courtesy of the publisher for unbiased review.

The Book of Atlantis Black: The Search for a Sister Gone Missing, by Betsy Bonner

I haven’t gotten around to reviewing it since last year because I’ve become so blogging-incompetent (I even put it on my favorites list without reviewing), but a mildly sort-of crime/memoir hybrid I thought worked well on both levels was The Book of Atlantis Black. Atlantis Black was the name grunge musician and artist Nancy Bonner sometimes gave herself. After her mysterious death in a Tijuana hotel room, her sister Betsy set about unraveling the mysteries of both her life and death, as far as either one could be understood.

A question remains as to whether it was even Nancy who died in Mexico, although I didn’t find that to be as much of a mystery as I think the author wants it to be, to keep her own hopes alive.

Nancy was my canary, ahead of me in the dark.

Bonner writes that Nancy wanted to be remembered and admired, and that’s what she strove for with her art. She says that writing the book was partly her effort to do that for her sister. It is so hard to love someone who’s an addict and unable or willing to do what they must for their mental health, and it takes an exhausting toll on everyone around them. The fact that, as difficult as Nancy could be, her sister still wants to celebrate her life’s achievements and triumphs, including her dogged artistic pursuits, without glossing over its darkness struck me as very admirable.

Although she addresses a lot of Nancy’s wrongdoing, other details were brushed past, like stalking behavior connected to her romantic interest in a very young neighbor when Nancy herself was significantly older. I suppose it’s meant to be attributable to Nancy’s mental illness, but it felt odd that sometimes Bonner was blunt about the truth (“My sister was not the worldly woman she thought she was. She was a sad, pitiful creature. If she couldn’t kill herself, she’d find someone to kill her.”) and elsewhere lets things go without commentary or insight.

Bonner has a dreamy writing style, quiet and often poetic but dark and meditative. This is much more biography/memoir than anything crime-related, as she vividly illustrates telling scenes and incidents from their childhood and complex family story, including a manic-depressive, suicidal mother who, according to Bonner, she “barely knew.” Nancy too would become stubbornly, opaquely unknowable, and what is known is clearly enough to drag Bonner into this investigative rabbit hole of trying to find some answers about why Nancy’s life took the course it did.

I’m not convinced there’s much of a mystery around her death, but the book does leave you with a general feeling of being unsettled, perhaps because the mere idea that we can hurt ourselves as badly as others can is a painful one, as is the knowledge that life with unmanaged severe mental illness is so heartbreakingly dark and difficult. It’s easy to see why Bonner felt compelled to write about her sister, despite the delve into so many painful, uncomfortable family memories. It’s a compelling testament to what Nancy accomplished artistically in her life as well as a stark portrait of that life in free fall towards an early end.

18 thoughts on “Two Mysteries: What Happened to Paula and Atlantis Black”