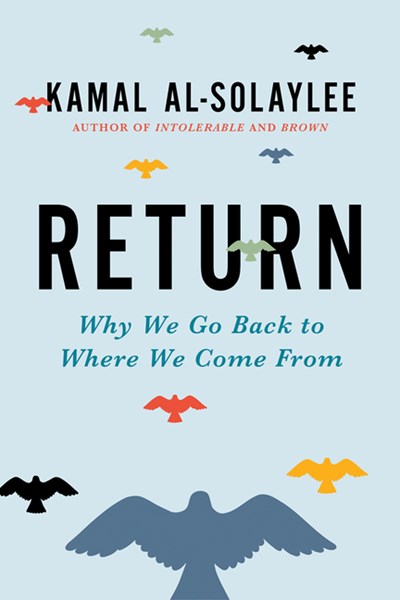 Return: Why We Go Back to Where We Come From, by Kamal Al-Solaylee (HarperCollins, September 7, 2021)
Buy it used or new at SecondSale.com

Immigrants, no matter our origins and skin tones, share a common delusion: we think we take pieces of our homelands with us and leave parts of ourselves behind whenever we choose or are forced to resettle elsewhere. The truth is that those homelands, lodged in our memories, in our brains and in our DNA, have been loosening and tightening their grip on us at will. Homelands dictate when we leave and predict when we return. Author Elif Shafak, a Turk by birth and a Brit by citizenship, describes homelands as castles made of glass. “It is easy to forget they are there… and go on with your life, your little ambitions and important plans, but at the slightest contact the shards will remind you of their presence. They will cut you deep.”

Canadian author Kamal Al-Solaylee became fascinated with the idea of return to one’s homeland after immigrating when he realized how strong his own pull to reconnect with his Yemeni roots was. This was especially curious considering Yemen’s unstable environment, fraught with war, poor economic conditions, and ever present threats of danger and violence. As a gay man who already struggled to find acceptance of his sexuality with his family members, its appeal for Al-Solaylee seems even more questionable, not to mention having established himself in comparatively safe, socially rich Canada.

And yet it remains. Visiting a family property, he wanted to experience living there, and the call of his roots only intensified, along with his desire to regain his skills in Arabic, his original language. Most strongly, there exists an overwhelming “human desire to spend the final chapter of life closer to the land that shaped its earlier stages.” He points out that although many disciplines, from politics to literature and everything in between, have extensively studied, explored, and created narratives and theories around the reasons for leaving one’s homeland, “Returns, however, remain unexplored.”

I wholeheartedly agree and have noticed the dearth of scholarship or even anecdotal writings on this subject myself, mainly because I also left my homeland and felt the strong pull to return. Now I live split between both, not really a long-term solution, but the best option when that desire became unbearable.

The question is why the call to home strengthens and intensifies with time, sometimes against logic and reason. Over a number of years Al-Solaylee interviewed returnees from a range of countries, with both different and similar reasons for leaving and returning. He focuses on the Basque region, Jamaica, Northern Ireland, Taiwan, Ghana, Israel and the Palestinian territories, as well as well as pandemic returns and the Back to Africa movement.

I found it interesting that some “returnees” had never actually lived in their “home” countries to begin with, rather they were groups like ABC – American-born Chinese, whose connections to these lands were through parents who had immigrated. Of course this is an entirely valid exploration within this subject, but I hadn’t considered it as much. I guess that’s very self-centered because I want to better understand my own experience, and kudos to Al-Solaylee for incorporating such a wide range of experiences and motivations into this study.

I found these stories less compelling though, as I think the idea of doing the hard work of leaving your homeland, finally integrating in a strange country, then swimming upstream to go back is a much curiouser phenomenon than wanting to experience the land of your ancestral heritage which kind of makes more sense to me, but again, I’m viewing all this through the lens of my own experience and questions I want answered.

Interestingly, he also looks at the idea of return post-Covid, when going back to where you came from took on an urgent meaning, especially in light of places like the United States, with no universal healthcare and hole-riddled social safety nets.

For now, and in one hell of a silver lining, the expression “go back to where you came from” no longer sounds to me like a racist chant or a threat. It’s something that millions of people have done and will continue to do, by choice or as a last resort. I feel an urge to join them and to be part of an ongoing, multi-destination narrative about return to roots. Return encompasses and transcends race, geography, and history.

At a symposium on migration and integration, he “asserted that returns suggest defeat, failure, and exhaustion, while migrations reinforce agency, action, and resilience.” This is another element I find so fascinating; again, maybe because that was the narrative I framed so long for myself, but I think it hints strongly at why this is a less explored subject.

Although the conditions for both immigration and return were different for many of the returnees, I nevertheless found a lot of their interviews ran together and felt similar. Perhaps most compelling were the returning Jamaicans, who first had to fight against especially strong racism and discrimination when integrating abroad, particularly in the UK, then automatically became targets for robbery and murder when they returned to retire in Jamaica. Whole organizations exist to try and give advice to returning Jamaicans on how to not be victimized, and since targeting them has become its own business, it defied logic to understand why they’d do it anyway.

It all seems to come down to those couple of simple concepts: people want to be buried where they came from, and the desire to go back only grows stronger with time. This can feel unsatisfying though, because I wanted to better understand the reasoning behind these ideas, maybe the psychology of it, and that’s not really here. It’s the interviewees’ stories, much in their own words, set against the political, social, and economic contexts of their homelands.

It can read quite academic in tone and heavy on the politics, which led to me skimming sections that didn’t feel as relevant to me as the topic I wanted to read about. The writing that he does, including his own feelings about return, is lovely, but I can’t say I enjoyed or wanted to read something more politically or academically-focused.

But this is an excellent opening of the door into a very under-explored area of research, scholarship, and personal writing. As Al-Solaylee identifies, we consider successfully integrating and “making it” in another country as the success story, and going home as the tail-between-your-legs acknowledgement of failure, when there’s obviously something much more psychologically complex and nuanced at play. I hope this is the beginning and that other writers and researchers pick up on this topic.

12 thoughts on “The Under-Explored Topic of Returning Home”