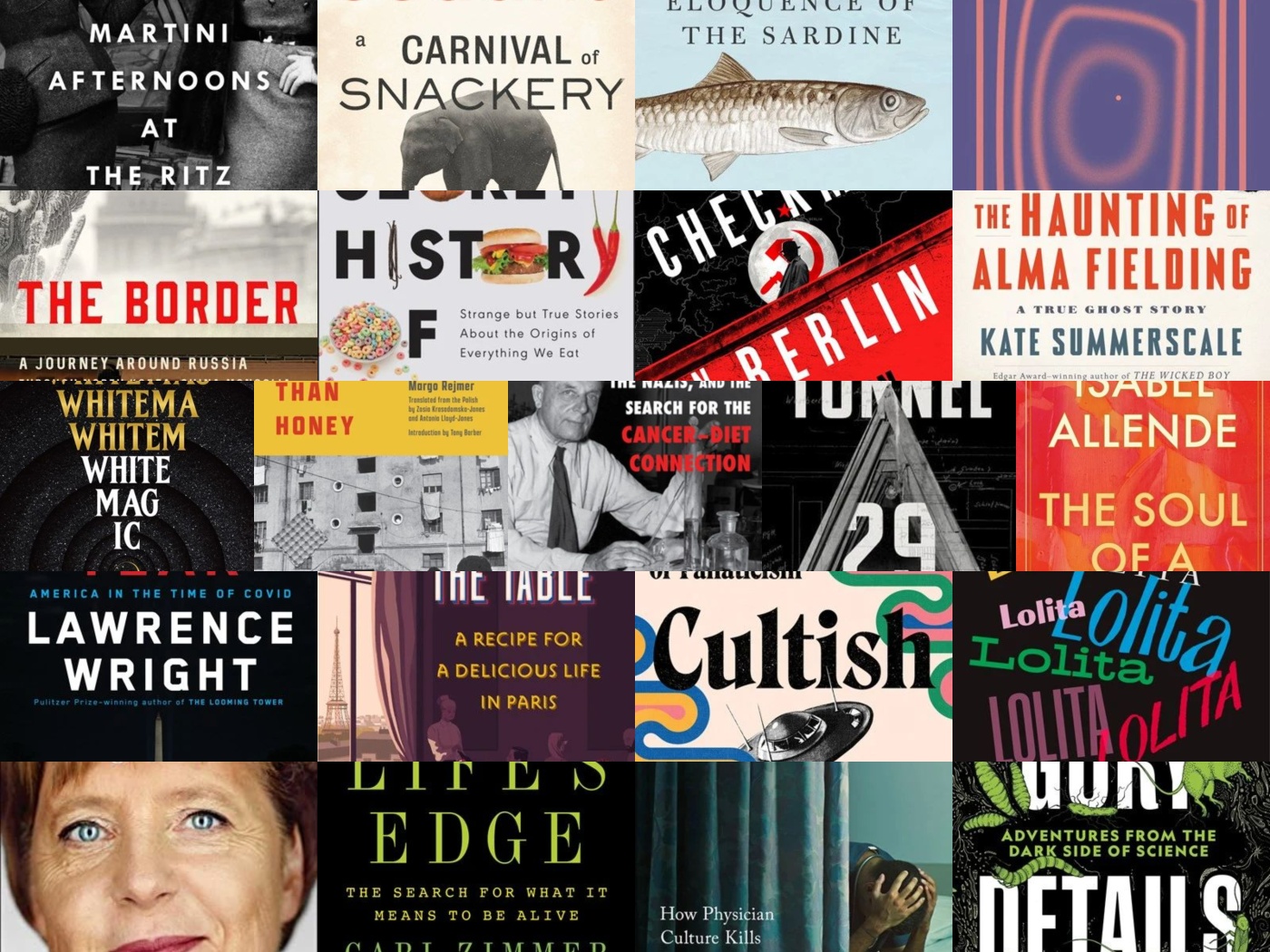 Eking in at the veeeery last minute, I’ve compiled my new release favorites of 2021. Let’s dive in!

Unsurprisingly, nothing surpassed Elissa Washuta’s White Magic for me. This memoir-in-essays is like nothing I’ve ever read before, although I’ve come across a lot of memoirs that attempt similar things less successfully. This uses a blend of the cultural touchpoints from Washuta’s life, from childhood computer games like The Oregon Trail to her fixation with Stevie Nicks’ music (especially the sublime Silver Springs) and the mythos of her relationship with Lindsey Buckingham, to explore Washuta’s recovery from trauma, including the generational trauma of her Native American lineage.

Woven through are her dabblings in modern witchcraft, as she implements elements from this alongside Native beliefs and practices as part of her arsenal of survival strategies and reforming identity. Not to mention healing from the years she spent misdiagnosed as bipolar, its own kind of trauma.

After reading this I read Washuta’s earlier memoir, My Body is a Book of Rules, and it was fascinating to see the evolution of her writing from that book to this one. She writes there something about how she got a professional education in writing, learned all the rules, and then wrote however she wanted to anyway. I can’t think of a better way to describe her writing, which is technically highly crafted but also its own completely wild, experimental thing. You know those books or authors that somehow write thoughts you’ve had deep in the recesses of your own mind, somehow saying exactly what you’d felt or wanted to put into words? This was that for me.

It isn’t for everyone: it’s not your typical linear arc of resolution story, it’s sexual and explicit (generally I don’t love this, but it worked here) and brutal in descriptions of the violence or trauma she endured. It’s a book that I desperately hope finds those who need it, because for the right reader, this is a masterfully creative, stunningly written, and powerfully reassuring read. (SecondSale.com)

A very close second is the long-awaited second volume of David Sedaris’s journals, A Carnival of Snackery: Diaries (2003-2020). I had such a book hangover after finishing the first volume in 2017 and couldn’t have been more excited that this year finally delivered the follow-up.

It was everything I’d hoped for. It’s mesmerizingly entertaining to get this peek into how his wonderfully weird brain works. Maybe a little voyeuristic but I find his diary entries strangely reassuring too — other people get upset by and ruminate on dumb bad encounters with strangers for way too long too, or have thoughts that even shock you, the thinker of them. Even the way he writes about sad or sentimental moments is poignantly lovely.

And also — not to have read his diaries and decided the most important element was me — but his style of reflection and the way he observes and interacts with people makes me look at the world around me differently. We overlook so much even in seemingly mundane moments or simple interactions and he’s so good at finding meaning or humor or connection or pure amusement in them. He makes me a little more able to do that for myself too, and bless his gruesome, grotesque little heart for that.

He’s not everyone’s cup of tea so if you were even lukewarm about the previous diaries or are sensitive about language or shocked at sudden mentions of dicks or worse don’t even bother. If you loved the other book and don’t mind his particular brand of utterly un-politically correct boundary testing or absurd and macabre sense of humor, you’ll be equally devastated to reach the end of this volume.

I’m disappointed that this is really the end of his diaries now and only if he lives another 20 years will we get another volume. I really hope he does live that long, but I don’t want to wait. (SecondSale.com)

The rest of my favorites in no particular order (links to reviews):

Lolita in the Afterlife: On Beauty, Risk, and Reckoning with the Most Indelible and Shocking Novel of the Twentieth Century, edited by Jenny Minton Quigley (SecondSale.com) – Like with any anthology, these essays from a wide range of authors on the controversial novel are not all standouts. I was particularly bugged by a few that did that ~twist~ of reimagining things from the perspective of another character (Charlotte Haze; Cheryl Strayed doing a Dear Sugar letter written by Lolita at age 80-something; groan) and I didn’t love that a couple were by writers who’d never actually read Lolita, were asked to contribute, read it, and wrote a piece in the aftermath. Every other piece basically serves as a testament to why this is a book you should mull over for awhile. A few get a little overanalytical or I just didn’t quite agree with the argument or it hardly seems worth making (like you’ll never convince me Lana Del Rey and her shtick convey a message worth hearing).

Complaints aside, the good in these was stellar. I loved that a common thread running through many, sometimes that the writers seemed to be working out themselves, was that this is a story of a too-common annihilation of a young girl by a too-common monster who hides in plain sight. I think that’s a truth many have trouble sitting with and is why people have such extreme negative reactions to the book. Some truths are hard to know.

The varying cultural perspectives are what really make this valuable: Bosnian writer Aleksandar Hemon looks at Nabokov’s ability to bend his non-native language to his own singular usage, showing others who feel torn between cultures how they can use language to do this too; Iraqi activist Zainab Salbi writes about how it’s legally ok for girls as young as nine to marry adult men in Iraq; there’s a lot of thoughtful, insightful analysis of both flawed movie versions and their places in Americana as well as what damage they’ve done; looks at Nabokov’s personality and quirks and how astonishing it is that a Russian author could write a book in English that captures so much that’s so particularly, distinctly American, right down to the road trip. Many writers share their own experiences of various iterations of abuse, often how they process it through the lens of other stories, like Lolita.

The “afterlife” of the title is post #MeToo, according to Mary Gaitskill’s essay. So there’s a lot of examination of what this all means today, also post-Jeffrey Epstein, ideas around consent, triggers, and similar in the public discourse, and even the question of whether Lolita still deserves its lofty position in literary relevance today – Morgan Jerkins’ “Lolita, #MeToo, and Myself” ties so many of these concepts together brilliantly.

Of course it deserves its renown, and not to be cancelled (apparently the New York literati wanted to at one recent point, and the consensus seems to be that despite its initial publishing difficulties, it wouldn’t be published at all today) but there are a lot of complicated things going on here, and I think it’s taken us this long to finally understand some of the messages at the core of Lolita, of what monsters and the quite ordinary destruction of women looks like and how men can get away with so much if they’re white, handsome, funny and really, only killing another white guy is the line too far, even if he was a pedophile too. And Nabokov wrapped it all in language so unusual and beautiful that it’s easy to get lost in the poetics of it, even when you reread it while older and are struck by a horror you missed at an earlier time (guilty).

The Haunting of Alma Fielding: A True Ghost Story, by Kate Summerscale (SecondSale.com)

Three Martini Afternoons at the Ritz: The Rebellion of Sylvia Plath and Anne Sexton, by Gail Crowther (SecondSale.com)

Life’s Edge: The Search For What it Means to Be Alive, by Carl Zimmer (SecondSale.com)

The Border: A Journey Around Russia, by Erika Fatland, translated from Norwegian by Kari Dickson (SecondSale.com)

Gory Details: Adventures From the Dark Side of Science, by Erika Engelhaupt (SecondSale.com)

The Soul of a Woman, by Isabel Allende (SecondSale.com)

The Plague Year: America in the Time of Covid, by Lawrence Wright (SecondSale.com)

Cultish: The Language of Fanaticism, by Amanda Montell (SecondSale.com)

The Eloquence of the Sardine: Extraordinary Encounters Beneath the Sea, by Bill Francois, translated from French by Antony Shugaar (SecondSale.com)

Ravenous: Otto Warburg, the Nazis, and the Search for the Cancer-Diet Connection, by Sam Apple (SecondSale.com)

My Place at the Table: A Recipe for a Delicious Life in Paris, by Alexander Lobrano (SecondSale.com)

Uncaring: How the Culture of Medicine Kills Doctors and Patients, by Robert Pearl (SecondSale.com)

Mud Sweeter Than Honey: Voices of Communist Albania, by Margo Rejmer, translated from the Polish by Zasia Krasodomska-Jones and Antonia Lloyd-Jones (SecondSale.com)

Checkmate in Berlin: The Cold War Showdown that Shaped the Modern World, by Giles Milton (SecondSale.com) – I haven’t reviewed this one, but it’s smoothly written narrative nonfiction about the pivotal days of the end of the Second World War in Berlin and the transition into the Cold War. It emphasizes the larger-than-life characters who were negotiating this fraught historical period from the American, British, and Soviet sides. I feel like I’ve read a good bit from this particular era and place but there was still so much here that was new to me.

The Secret History of Food: Strange but True Stories About the Origins of Everything We Eat, by Matt Siegel (SecondSale.com)

The Chancellor: The Remarkable Odyssey of Angela Merkel, by Kati Marton (SecondSale.com)

Tunnel 29: The True Story of an Extraordinary Escape Beneath the Berlin Wall, by Helena Merriman (SecondSale.com)

In Memory of Memory, by Maria Stepanova, translated from Russian by Sasha Dugdale (SecondSale.com)

That’s a wrap for this year! My biggest thank you to everyone who reads and comments here: thank you for your support, your kind words, thoughtful conversations, and your friendship. Wishing you a happy and healthy new year that’s full of books you love.