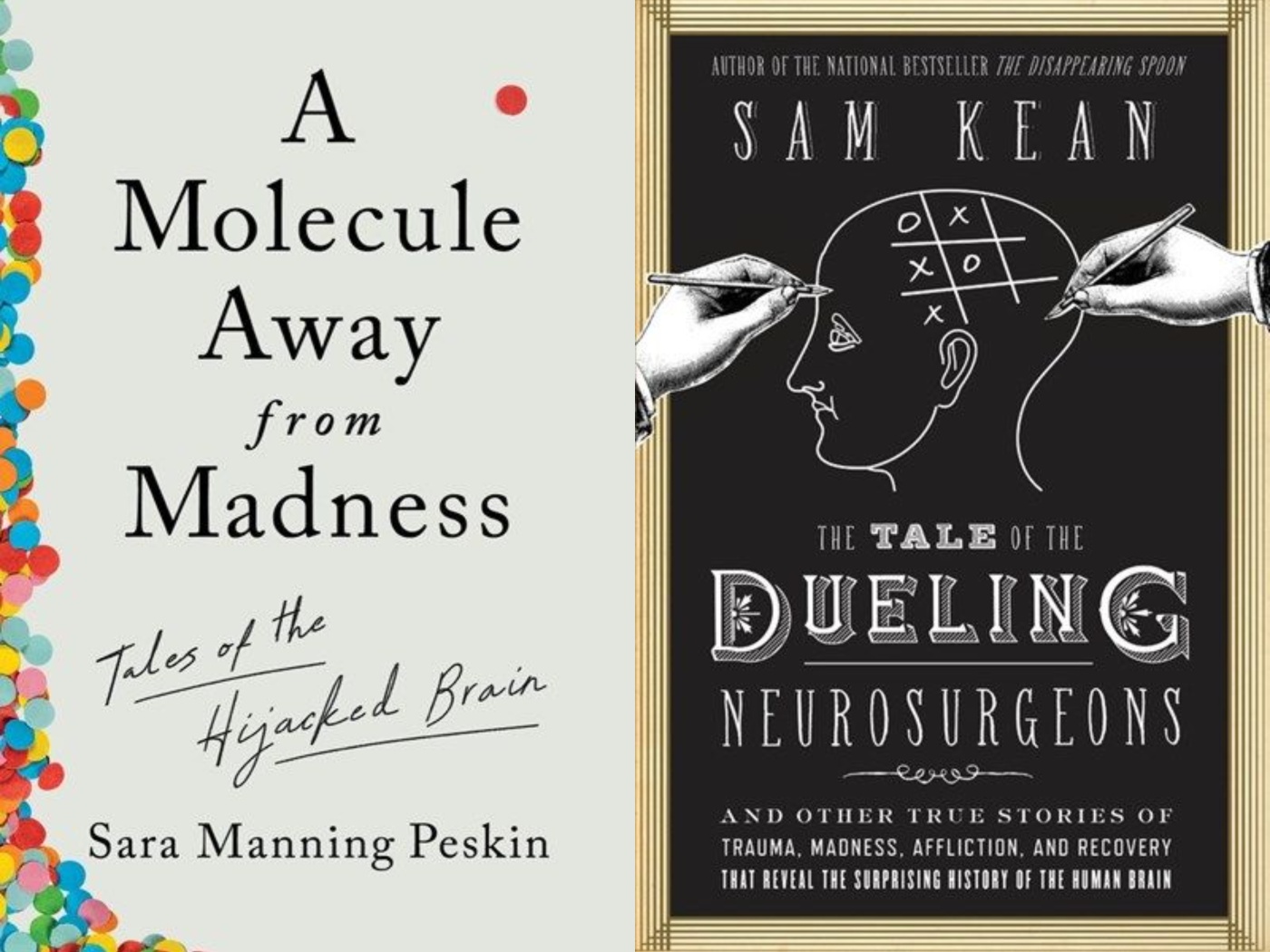 A Molecule Away from Madness: Tales of the Hijacked Brain, by Sara Manning Peskin, published February 8, 2022 by W.W. Norton. Used or new @SecondSale.com

The new book A Molecule Away From Madness: Tales of the Hijacked Brain by Dr. Sara Manning Peskin explores the hairline between normal functioning and utter disaster in the brain. Sound scary? It is. But it’s also a fascinating look at how science in this area of cognitive abnormalities is progressing, and what we’re learning about external influencing factors on cognitive decline.

There are already solutions to some of the conditions described here — including happy endings for some of the patients — but others, like Alzheimer’s, remain untreatable. Most menacing are the illnesses that lurk in DNA, and Manning addresses here several children who have to face the genetic tests after a parent succumbs to a hereditary illness.

I was left with a feeling of unease about how easy it is for one molecule, or a single genetic mutation, to change everything — to be the difference between life and death, and especially to be the factor that changes a life into one that’s terrible for both the person suffering the illness and their loved ones, but ultimately this feels hopeful, believe it or not. We’ve come a long way, and genetic testing has allowed us to avoid potentially heartbreaking mistakes, like conceiving naturally instead of with targeted medical help when that could lead to devastating illnesses in a child.

It’s reassuring to understand something about the progress being made, like that Peskin sees the future of medicine around cognitive disabilities moving in the direction of understanding how factors like genetic mutations, environmental pollutants, and substances like drugs or alcohol work in individuals and their specific body/brain chemistry, as opposed to generalizations about how dementia or Alzheimer’s function.

Some of the case studies were really surprising to me, like an examination of Abraham Lincoln’s outbursts of rage, which Peskin traces to his usage of a medication made from mercury, although the historical record remains murky on whether he not he was actually prescribed the drug.

Others feel more familiar, like another bizarre case of anti-NMDA-receptor encephalitis, the condition Susannah Cahalan was diagnosed with in Brain on Fire, this time involving the perception that the afflicted was living in the zombie TV show The Walking Dead.

It’s very readable and accessibly written, and never becomes too technical or esoteric to lose the lay reader. It manages to be both highly entertaining and deeply informative popular science around a topic that’s becoming increasingly important as genetic testing for specific inherited diseases becomes more affordable and widespread, and precision medicine becomes accordingly more promising. I received an advance copy courtesy of the publisher for unbiased review.

This also ended up making a great coincidental read-together with a book I read a few weeks ago, Sam Kean’s The Tale of the Dueling Neurosurgeons: The History of the Human Brain as Revealed by True Stories of Trauma, Madness, and Recovery, published in 2014. Popular science writer Kean takes a more historical route with the stories he tells, and imbues a lot of humor into the history (don’t skip the footnotes!). I’m glad I read this one first actually, because it had some overlap with Peskin’s book, but Dueling Neurosurgeons went more in-depth on the case they had in common and I felt did it more justice.

This was the story of kuru, a mysterious neurological sickness that only affected members of an isolated tribe in Papua New Guinea. The story around the scientists investigating this puzzling, deadly illness is pretty wild itself, and eventually highly unsettling. Although Peskin addresses the major plot points of it, Kean just does it more thoroughly.

This also has more of a focus on medical history and developments, dating back to the 1500s, as opposed to current and future treatments. Kean shows how the groundwork was painstakingly laid so that our understanding of cognitive functioning could develop over time, and how it came about opportunistically, often through mistakes or misunderstandings. He uses very compelling and often perplexing stories — “neurological curiosities” of things like phantom limb syndrome, the brains of Siamese twins, and patients with mysterious viruses, severe brain injuries (the classic Phineas Gage), or other conditions (like surgery with unanticipated side effects — that of “Patient H.M.“, Henry Molaison) that have helped us better understand how exactly the brain works.

Kean is also very good at incorporating the human element into these stories, so it never feels dry or even that distant, despite how far in the past some of these stories are. He weaves together so many telling details from the lives of patients and clinicians as well as social commentary on the times to explain incidents. Occasionally some of the medical science was a bit heavy for me, but at least Kean makes a sincere effort to cover the mechanics of it, and it’s more on the individual reader for how much you can comprehend (these sections aren’t very extensive though, so losing the thread a bit didn’t hamper my enjoyment of this).

6 thoughts on “Two Collections of Brain Mysteries and Cognitive Curiosities”