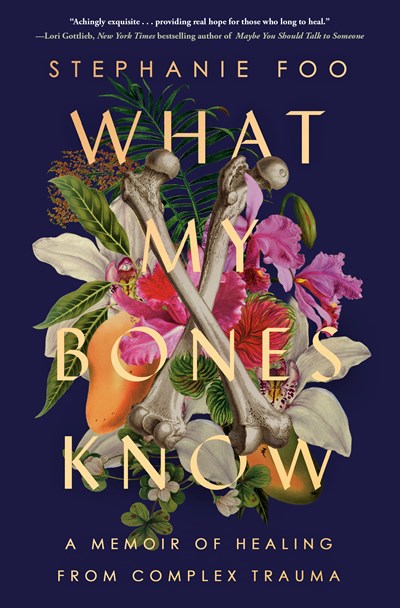 What My Bones Know: A Memoir of Healing From Complex Trauma, by Stephanie Foo

Hatred, I learned quickly, was the antidote to sadness. It was the only safe feeling. Hatred does not make you cry at school. It isn’t vulnerable. Hatred is efficient. It does not grovel. It is pure power.

Reading the new memoir What My Bones Know: A Memoir of Healing From Complex Trauma by radio journalist Stephanie Foo is more of an experience than any book I’ve read in recent memory. It encompasses so much that I sat staring at the blinking cursor for long minutes trying to even come up with the essence of it to summarize.

I guess, at its core, its simplest, it’s a memoir of how a young adult woman copes and reckons with the complicated lifelong legacy of childhood trauma, bit by bit, piece by piece, as she grows and learns more about herself, her roots, and how she can shape a better future regardless of the shitty foundation she was given.

But it’s so much more — it’s mental illness in all its messiness, but including the humor of it sometimes, it’s a rollercoastery ride of improvements that backslide but then build and overcome again, it’s the hopeful promise of someone who understands the worst you’ve been through and loves you anyway, tied together with accessible science and psychology.

The basic narrative is that by her teens, she had been abandoned by both of her parents. Her mother had been physically abusive and her father seemed to withdraw from the situation, allowing it but frequently expressing that he was hopeless and suicidal and putting the weight of this on Stephanie. Amidst this, Stephanie became the glue holding these two broken people together. She often references how she had to save her parents’ lives, quite literally. It loops back in time as she works through specific events and relates them to present issues, especially when she uncovers the roots of some of her own troubling behaviors.

Obviously, this is never a burden any child should have to carry, and especially not as brutally as it played out for her. It goes without saying but this is a very tough read. I’m not one for trigger warnings but if you have any connection to your own childhood abuse, physical or mental, this will certainly bring those memories to the fore and it’s best to be prepared for that.

And yet I would recommend it unhesitatingly for anyone who’s suffered similarly. The author has such a sympathetic, honest voice — she shows everything, including how she acted out in response to what she’d endured. It’s reassuring and realistic at the same time — and it doesn’t sugarcoat anything that’s difficult and exhausting in the process of healing yourself and surviving.

Her use of therapy — and acknowledgment of its potential limitations and shortcomings — forms a large part of this story. She allows the reader to follow her through her sessions, as she tries different therapeutic techniques like EMDR before finding one therapist and method who could really help her make progress. The impetus for telling her story actually comes from her long-time therapist finally giving her a diagnosis, of complex PTSD. As she researches it, she finds that it’s a lesser-explored and discussed type of PTSD. This memoir alleges to be the first of its kind in looking at how complex PTSD manifests, and how it looks from a deeply personal, experiential point of view.

The doubt bloats heavily in my stomach. If I could twist mountains into hills, then what else did my traumatized brain dissolve?
Can a mentally ill woman ever be trusted with her own story?

This is one of the elements I find so fascinating in any examination of memory and the stories we tell ourselves. What’s actually true and what was invented to mitigate trauma? How do our brains work behind the scenes to protect us so we can keep living? It’s a topic that’s been brilliantly explored in texts like The Body Keeps the Score, but Foo gives an incredibly visceral, emotional look into how it plays out in a single life. The amount of self-sabotage she’s engaged in in various ways, her other troubled relationships and friendships, difficulties at work — she shows how all of it is tied to the early influences on her brain and behavioral functioning.

I had quite a few ugly-cry moments reading this, as I think most will. But i’s really a remarkable work: as I mentioned she somehow manages to be, at times, completely hilarious despite the pain of all this, she weaves in understandable science and biology to help understand what happened to her and others with complex PTSD, and has created such a valuable thing for others with complex PTSD or even peripheral conditions and experiences. It’s hard to talk about childhood abuse and bad parenting and being estranged from parents who don’t love you or don’t know how to — one of the toughest moments here is when she comes to the realization that her parents didn’t love her. But the bravery in how she’s refused to let her own life be lived in the shadow of their legacy, including generational trauma (and Foo was born in Malaysia, so an element connected to immigration plays into this as well), and instead to work exhaustively towards shaping a healthy, aware life that’s full of love and joy and celebration is truly incredible.

It does have a bit of a too-neat ending — and I don’t mean this to begrudge her her happy ending, because thank goodness she had one after the life she’s lived. It was only the packaging of it, a too-perfect wrap-up considering the honesty that had come throughout the entirety of the rest of the book, whereas I find something like Elissa Washuta’s recognition in White Magic that despite our need for stories that resolve happily and a narrative arc that satisfyingly ends with change and redemption, that’s rarely how these things go. It felt like a way to conclude this on a high note, but I was thrilled for her happiness, the healthy, supportive, and loving relationship that’s helping her to heal, and recognition of her own accomplishments, which are positively massive.

And although the subject matter is really, really heavy, and although this might sound odd, the writing is so outstanding that reading this is a delight. It’s hard to put down, which is the highest praise I can give for something that involves so much trauma. It’s a fantastic memoir in general in addition to the importance of the topic and lack of stories in this particular genre.

I received an advance copy courtesy of the publisher for review. Published February 22, 2022 by Ballantine Books. Used or new @ SecondSale.com

11 thoughts on “A Journalist On Living with Complex PTSD”