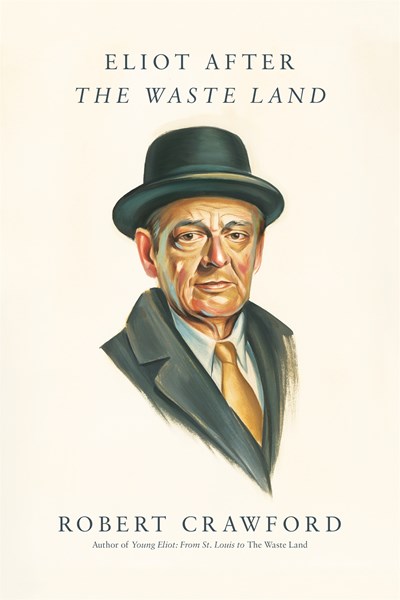 The long-awaited conclusion of biographer Robert Crawford’s biography of T.S. Eliot, Eliot After “The Waste Land”, is finally here. Crawford waited until the letters between Eliot (referred to as Tom throughout) and his longtime muse and one-that-got-away, Emily Hale, were unsealed in 2020. Hale donated the correspondence to the Princeton University Library, against Eliot’s wishes but with the proviso that they could only be made public after either she or Eliot had been dead for fifty years, whichever came second.

As his muse and object of a strange kind of affection but also his greatest confidante, the letters were crucial to understanding the latter years of his life. Hale and Eliot never married. As far as I understood it, after her initial rejection of him in their youth, this was later because of their differences in religion. They never slept together either, according to Eliot.

There is some such uncomfortable stuff here — made even more so by the fact that Eliot mentioned several times that he never wanted to be the subject of biography and he often destroyed correspondence rather than let it be preserved for history. It makes for some uneasy reading then, to know such details of his life — including the weird descriptions of his sex life with Valerie Fletcher, his much younger second wife (and former secretary!).

The key life events here include the progression of his first wife Vivienne Haigh-Wood’s illness, which seemed fairly indefinable at the time, and now seems agreed to have been bipolar or possibly schizophrenia, or maybe both. Regardless, she was miserable and so was he, and he only seemed to regain something of himself after their separation.

The major works it covers, like the first biography focused on the creation of “The Waste Land”, are the powerful Four Quartets (my favorites of his poems) and his play Murder in the Cathedral (he actually had a lot of involvement in theater productions during this period, but I didn’t find this the most compelling reading — it’s heavy on inconsequential details).

There’s also a lovely deep-dive into the poem “Marina,” Eliot’s ode to fatherhood despite never fathering a child himself. “Marina” is one of my favorite poems and as Crawford writes, is “one of the most beautiful of all anglophone poems”. (If you love Eliot’s work but don’t want to commit to the entire biography, read this section alone — it’s so worth it!)

My favorite parts were around Eliot’s life in London during the Second World War. He described the experience in letters and diaries, including his work as an air raid warden, and it’s interesting to hear his take on wartime events from the perspective of that moment.

I also loved everything around the Four Quartets, from Eliot’s visit to his ancestral village at East Coker to the analysis Crawford weaves in, like that these four poems “written during times of profound personal pressure, articulate remarkably and simultaneously a sense of struggle and almost limitless endurance”.

But I skimmed large swathes. A lot of it was heavily religion-centric, as Eliot was obsessed with his conversion to Anglo-Catholicism. This felt very dull, and although I was predisposed to feel that way, being uninterested in religion, I think even if you’re drawn to the topic it’s especially dry reading.

Crawford writes briefly about his aims, the most significant of which seemed to “maintain a close focus on the man […] rather than attempting a panoramic survey of the society, figures, and cultures around him.” That makes sense, I think especially considering the specific times and how much was happening globally, but especially in his native US and adopted England in these years of the mid-1920s until his death in 1965, but it wasn’t satisfying when you consider that Eliot had some serious issues that should have been better addressed.

His alleged antisemitism, which he does seem to have harbored initially even if he changed his mind later, and his other prejudices are skimmed over or chalked up to being the beliefs with which he was raised. I did a class on Eliot in college, the Four Quartets specifically, and although my memory is a leaky sieve so I unhelpfully can’t quote specific examples, our Black professor addressed this topic much better than is done here. There really is a lot more to say on this and the topic deserves that.

And when I consider the incredibly well done social context that was woven into Sylvia Plath’s recent definitive biography, for example, this seems a bit of a cop-out. So it has to be taken for what it is: a meticulous (sometimes overly so) account of what his life was like, who he was, how his suffering shaped his art, the work that was important to him even outside of poetry, like his editorship at Faber and Faber, and his relationships with friends and loved ones (his friendship with Virginia Woolf was a highlight, too).

And of course, the defining life events are the relationships with his three leading ladies. He wrote that “Emily Hale would have killed the poet in me,” and “Vivienne nearly was the death of me, but she kept the poet alive.” He also said that there would have been no “Waste Land” without Vivienne, which would have changed the landscape of English-language poetry forever. What a thought to consider.

But the happiest of these loves was Valerie. I don’t know if this will sound shallow, but it had a Cinderella-like moment at the end that I absolutely loved: Eliot worried that he wouldn’t be able to leave much to his beloved second wife Valerie, but in 1980 she allowed Andrew Lloyd Webber to turn Old Possum’s Book of Practical Cats into the musical Cats, which left her very rich.

Even though he was a cranky, crotchety type, Valerie insisted that there was always a childish innocence about him, and that does come across here. His life on the whole wasn’t what I would call a happy one, and Valerie herself said that he didn’t want to die until he had experienced a happy relationship. And he wanted to take care of her like she took care of him at the end of his life but it didn’t look like that would be the case when he died, until Cats. So he got his only wish and I admit I welled up.

But not only that. Valerie, famously protective of Eliot’s legacy and careful with what his work was used for, went further:

She set up a trust, and established the T. S. Eliot Prize for poetry, personally signing the winners’ cheques. Living on in the Kensington Court Gardens flat, she always felt Tom’s presence, and stayed true to her 1972 remark, ‘I still feel married and that I’ll never marry again.’ When she died in 2012, a neighbour who had lived for two decades in the same mansion block wrote to The Times, ‘she always kept a very low profile, but the porter told me that every Monday a florist’s van would draw up and a large and expensive bouquet of flowers would be delivered to her from her husband Tom, dead since 1965, by posthumous instruction to his solicitor’.

I had to hide my tears on the subway.

A bit long and bogged down with unnecessary details, but skimmable, I enjoyed what I took from this and I’m happy to have a better understanding of who he was and what inspired works that are among my favorite writing in the English language. And it’s admittedly exciting to have new insights into his life after more than fifty years.

published August 23, 2022 by Farrar, Straus and Giroux. I received an advance copy courtesy of the publisher for unbiased review.
Used or new @SecondSale.com

4 thoughts on “The Second Half of Robert Crawford’s Definitive T.S. Eliot Biography”