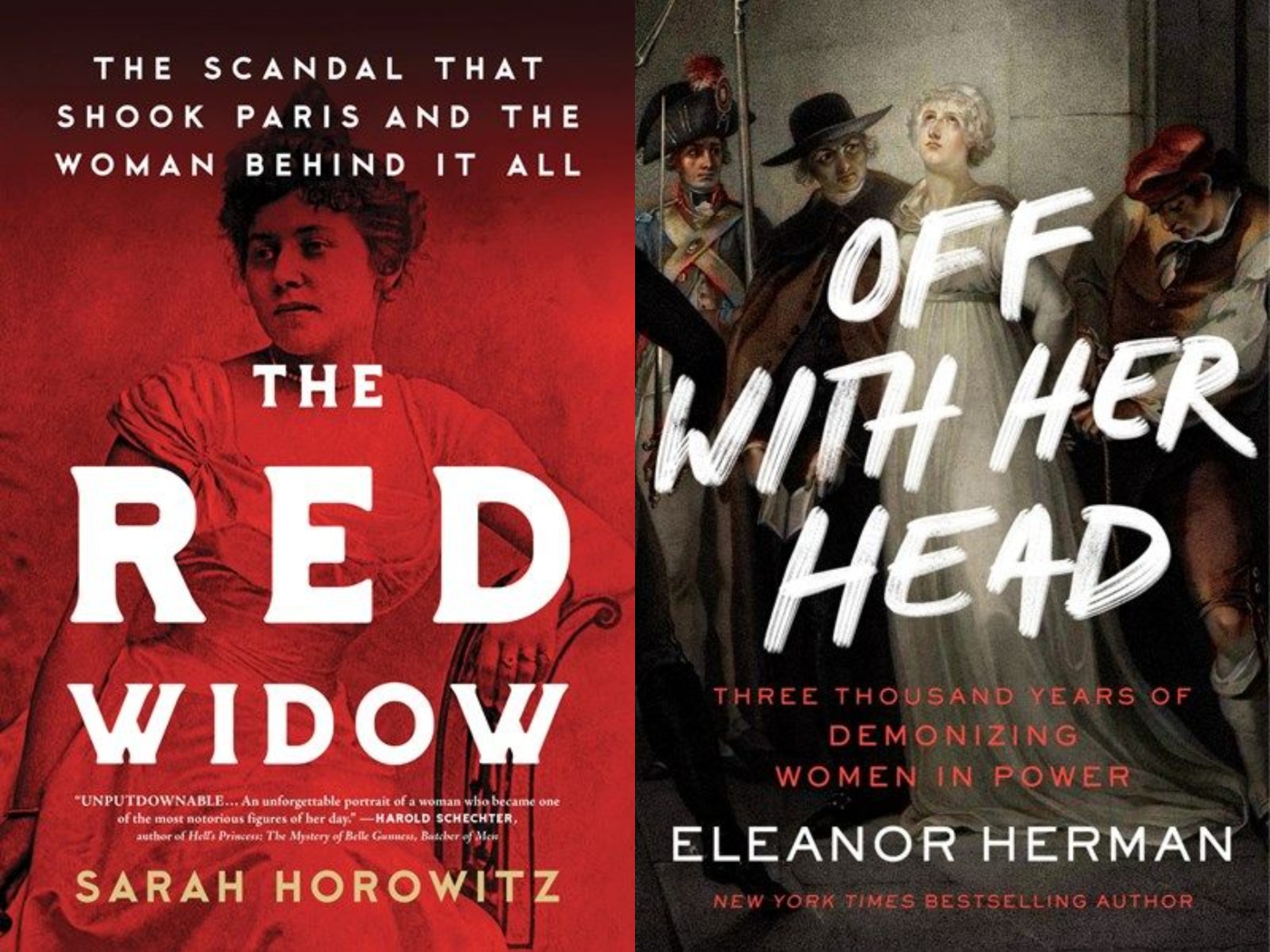 I love history that digs into something that was absolutely massive during its day and now is essentially unknown and forgotten. It always makes me wonder what the same things will be from our era. Sarah Horowitz’s The Red Widow: The Scandal that Shook Paris and the Woman Behind it All (September 6, Sourcebooks) does exactly that to a woman who was once notorious in France but today is merely a footnote.

A shame, because the story of Marguerite “Meg” Steinheil is quite the story. Social climber and “society courtesan” Meg married a much older painter, Adolphe Steinheil, although was never particularly happy about it, so she embarked on a series of affairs that definitely seemed numerous and transaction-y enough to technically make her a courtesan, but she was less interested in money and more in social status.

She made it so high up the ladder that she ended up mistress to Felix Faure, then-president of France. Meg was catapulted into infamy in 1899 after Faure suffered a seizure during an afternoon sexual encounter with her in the presidential palace. She became the subject of legend (and, most likely, exaggeration and myth) thanks to this, so when her husband and her mother were found dead in their home on the Impasse Ronsin in Paris, with Meg gagged and bound in another room, the case and subsequent trial created a frenzy.

Horowitz is a history professor and head of the Women’s, Gender, and Sexuality Studies program at W&L University, and she brings that professorial touch of analyzing source material in a useful, illuminating way to this story. I don’t mean that this reads like a textbook or feels like a lecture, not at all; more like imagine your favorite professor making something make sense to you — that’s what Horowitz does.

She clearly sets out why certain events may have happened as they did, and what then-unwritten meanings can be ascribed to others. She even explains what certain positioning and objects depicted in paintings and pictures mean: I love when authors do this! I learned so much from her parsing of historical materials, and she was even able to resolve some points that had remained mysterious in their time. It’s really impressive historical scholarship in a completely readable, highly entertaining narrative.

This is one of those stories that really has everything, from a vivid depiction of Belle Époque Paris and its rules and mores, to the figure of Alphonse Bertillon, the researcher who advanced the use of anthropometry in police identification of criminals. The details of this story are absolutely wild, too — I refrained from including many because it’s really a book that the less you know going into, the better. I think my mouth actually dropped open a few times while reading it. It’s the perfect blend of gossipy scandal with a decent amount of historical remove with well analyzed and documented history.

I was curious about where the title came from, as there’s never any mention of the color. I also wished that there had been a bit more focus on what the author thought happened around the deaths and who was responsible, although it seemed like she’d made the best of the sometimes obfuscated source materials. Overall this was such a fun, interesting, and surprisingly educational read.

Historian Eleanor Herman’s talent is writing pop group histories with wit and humor, and thankfully there is some or else Off With Her Head: Three Thousand Years of Demonizing Women in Power (September 6, Harper Collins) would be a grim(mer) read. It often still is even despite her trademark wit, but it’s also extremely important and filled with fascinating bits of history and well-told anecdotes that drive these points home with emphasis.

Herman begins by identifying what she called the Misogynist’s Handbook: essentially, the basic rules for misogyny that have been applied to women across the ages, especially those who refuse to conform to male-established standards around power and who’s allowed to have and use it, thus demonstrating how little things have changed (truly, you may be surprised). She does a lot of myth-busting, some of which already feels familiar, like around Catherine the Great, but a lot that was new to me.

Politics are a major focus since women in this field tend to suffer particularly, as are royal figures like Cleopatra, Jezebel, Anne Boleyn, . Several contemporary female politicians are featured throughout, including Australian prime minister Julia Gillard, British MP Diane Abbott, US politicians Kamala Harris, Stacey Abrams, Nancy Pelosi, and of course, Hillary Clinton. Although Herman’s telling is excellent and the weaving together of multiple stories drives home the seriousness, I think The Hunting of Hillary handles her particular treatment a bit better (of course, a book-length exploration of one person versus many here should do that, but there’s just so much more to it that didn’t come up here).

I found some of her explanations, particularly those summing up chapters, overly basic. When the humor works it’s great, elsewhere it’s less funny. There’s also a format of saying something like “This would never happen if it was Harry Clinton” or the like that gets old fast, and isn’t as effective as when Herman applies insight and analysis to these sexist and misogynistic events and really shows where they’re coming from historically and what it means in the present-day context. When she does this it’s excellent, and I don’t need to be reminded of the absurdity of these situations when the genders are reversed.

A 2016 study by the social intelligence company Brandwatch analyzed nearly nineteen million public tweets and found that 52 percent of misogynistic tweets were posted by women. In 2014, the cosmetics company Dove conducted a study on five million negative tweets written about women’s appearances and body image. Eighty percent of the writers were women.

I was so intrigued by that, included early in the book, because that’s seemed very true to me: women also internalize the rules of the Misogynist Handbook and use them against other women viciously. I was excited for a closer look at this but it’s not really touched upon again, disappointingly.

I remember there had been some past criticism about accuracy in Herman’s popular histories and this is lacking footnotes (at least in the ARC), so it did have a few questionable moments, like some confusingly worded sections that created ambiguity around meaning, and some curious assertions. Publishers Weekly pulled some “eye-popping statistics […] tossed in without adequate context” in their review, and thus I really wish this was footnoted.

Criticisms aside, this is wildly entertaining, and although I feel well read and aware in this area, there was still plenty that was new and shocking to me. Especially after considering all of these stories together, you’re left in a state of near-disbelief. This book comes at a critical moment in time, as women’s reproductive rights are being rolled back in the US and Iranian women protest mandatory hijab. The impact of these stories — or really, the same story over and over, across thousands of years — feels immense.

I received advance copies of both books from their respective publishers for unbiased review.

9 thoughts on “Two Histories: A Parisian Scandal and the Time-Old Tale of Women and Power”